A Pool with a View

An art project on Berlin's Spree River is also one of this summer's biggest hits -- a swimming pool anchored out in the river. It's proven an irresistible draw for water-loving residents of this land-locked capital. 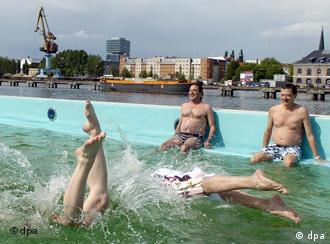 Berlin residents can now frolic in the Spree River, sort of.

Last year, Berliners went wild over the "beach bars" on Berlin's Spree River. Tons of sand were trucked in creating faux seashores in middle of the capital where hipsters could hang out sunning themselves in deck chairs while sipping cocktails. 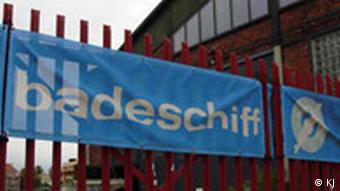 Entrance to the "Swimming Ship"

This year, the concept has gone one step further and a little water has been added to the mix in the form of a low-slung swimming pool right in the river. The Badeschiff, or swimming ship, is a magnet for surf-starved residents in search of a near-beach experience.

Its neighbourhood, a somewhat gritty section of the eastern Berlin district of Treptow, seems an unlikely candidate for sand-and-surf frolicking. Indeed, the Badeschiff lies tucked squarely in the urban landscape, behind the dark brick buildings of a former bus depot.

But once visitors pass through the entrance gate, they encounter cool bright sand, hammocks, folding beach chairs and the cool blue water of the pool itself, where they can swim from 8 a.m. to midnight.

The ship's filled with 400,000 liters (105,668 gallons) of fresh water that's been slightly chlorinated. The water is heated to a comfortable 24 degrees Celsius (75.2 degrees Fahrenheit). The pool has been filled so that its water level is almost even with the pool's edge, which itself is 70 centimeters (28 inches) above the surface of the river.

"We wanted swimmers to be as close to the Spree as possible," Laurenz told DW-WORLD. "It allows swimmers to have views of the surrounding city while they swim."

Connection to the past

Lorenz took her idea of the Spree pool from the past, when Berlin's river was home to many swimming facilities.

In 1906, there were eleven swimming areas for men and seven for women. But over the years, pollution turned swimming in the Spree into a health hazard and bathers had to abandon it for the region's lakes or municipal swimming pools.

The pool project itself is part of a larger exhibition sponsored by the City Art Project Association that examines different kinds of connections people have with their urban environment. Lorenz and her partners on the project, the architecture firm AMP, wanted the pool to reintroduce Berliners to an aspect of their river that has been lost.

"It's designed to be kind of a mix between a lake and a swimming pool," Lorenz said. "It has a connection to the past, but is a modern place as well."

Near the entrance, there's a large area covered with sand and a few folding chairs, a long bar and a covered pavilion where DJ's spin their records on the many event nights. Those tired of swimming can work off a few more calories on the sandy dance floor. 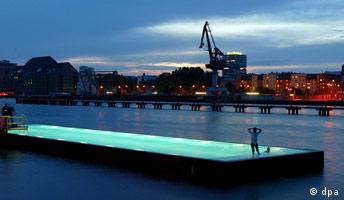 Nighttime at the ship

"We envisioned the whole area as a kind of bar where one can go swimming as well," Lone Bech of the event production company Arena told DW-WORLD. "At night, the pool is lit and you have Berlin's night sky. The mood is really great."

The company, which manages the neighboring Glass House Theater and several other Berlin entertainment venues, covered 80 percent of the Badeschiff's costs, which Bech would only say have run well over €100,000 ($120,000).

But the expense has been worth it, she said. In fact, the popularity of the facility has been such that what was built as a temporary installation could become permanent. The company is considering keeping the Badeschiff open throughout the year and installing saunas to help stave off winter's chill.

As one approaches the river from the bar area, the sand gives way to a large wooden deck that leads out to the pool itself. Posts rising above the deck surface double as supports for hammocks. More deck chairs are scattered about as well as cushion-covered platforms and even a king-sized metal bed frame. There is almost no traffic noise to be heard. 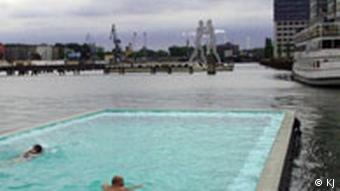 Swimming on the Spree

On a recent day, the weather was overcast and the slight breeze was cool. Even so, at 10:30 a.m. two people were swimming laps in the pool while a few others were sitting on a ledge at one end, enjoying the views across the river.

"It's a nice mix here of the artistic and the practical," said Sandra, 31, who was there for the first time. "You can swim right in the middle of this completely urban setting. I'll definitely come back."

Regular pool visitor Lisette, 39, who was sitting beside her, said she didn't mind the dark clouds that were gathering overhead. In fact, this urban oasis has become so popular, she said she preferred it when the weather was a little uncertain.

"It's not so crowded now as it can get when it's sunny and hot," she said. "You can just sit back and relax here better than you can in any other place in Berlin."

A few raindrops didn't prevent 49-year-old Ingrid from donning her swim cap and jumping in for a few laps. An enthusiastic water fan, she moved to her apartment right around the corner 20 years ago to be close to the river. She said she had always dreamed about being able to walk out her door and jump in the water.

"Now that dream has come true," she said. "Who would have thought?"

Berlin may be landlocked, but that won’t keep the denizens of Germany’s largest concrete jungle from having a beach party this summer, as sand and beach chairs have sprung up along the banks of the river Spree. (June 21, 2003)

Concerts and exhibitions at the seat of the former East German parliament have given Germans a chance to bid farewell to the building, which is scheduled for demolition in 2005. Now, they'll be able to visit it by boat. (Aug. 16, 2004)

A Ban on Nudist Beaches?

Eastern Germany's beaches are at the center of a controversy: While locals have always enjoyed bathing naked, many western German visitors lament the lack of clothes. DW-WORLD readers side with the nudists. (Aug. 13, 2004)