Concerts and exhibitions at the seat of the former East German parliament have given Germans a chance to bid farewell to the building, which is scheduled for demolition in 2005. Now, they'll be able to visit it by boat. 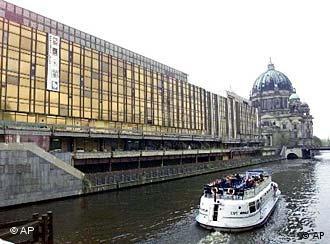 This boat's too big to fit inside

Once the glittering center of East Berlin, most of the "Palace of the Republic's" gold-mirrored windows have disappeared, turning the building's shell into an eyesore. 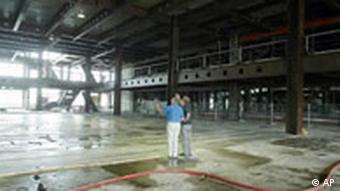 The buildin's interior will be flooded with water in September

But cultural events held inside the building have attracted thousands of people over the last months. Starting on Friday, artists will again take over the palace and open it to the public.

Some people might show up in bathing suits: Among the events planned for the three-month program is a huge artificial lake on the building's ground floor. On Sept. 3, organizers will flood the palace with 300,000 liters (79,250 gallons) of water to give people a chance to explore the raw space in a different way.

"We want to show that the element of water changes the perception of a building," Wolfgang Grillitsch, one of the organizers, told mass-circulation daily Bild. "It mirrors facades, the room looks bigger and the acoustics change."

At a depth of 25 centimeters (9.8 inches), it won't be possible to swim in the pool. Instead, people will paddle around the building in dinghies. 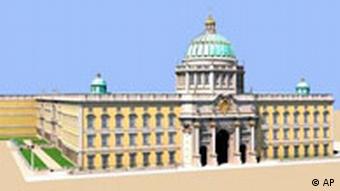 A model of the imperial palace

Once the building is demolished, a replica of the imperial palace, which stood there before, is supposed to be rebuilt. But so far funds for that project still haven't been raised.

Click here for a selection of previous "And Finally" stories.

Lights Out for Erich's Lamp Shop

The Palace of the Republic's days are numbered. The German parliament decided on Thursday to replace East Germany's former seat of government in Berlin with a park until there's money in the budget for more. (Nov. 13, 2003)