A musical tale of when Britain interned German refugees

At the height of World War II, thousands of German and Austrian nationals in the UK were rounded up and sent to internment camps. But at one camp, art helped internees maintain hope and express their refugee experience. 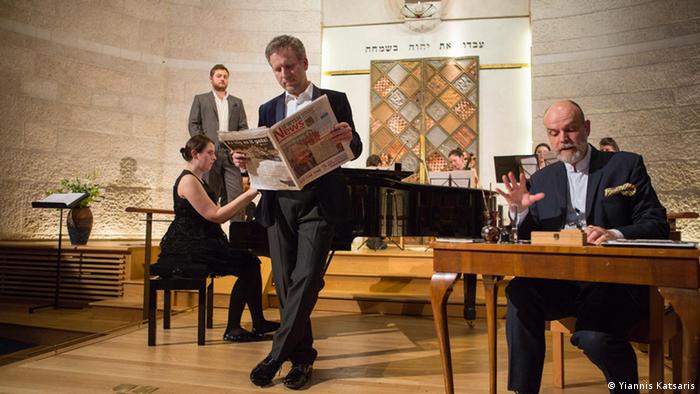 Written in a WWII internment camp in Great Britain, the revue "What a Life!" is now being performed again

When Paul Humpoletz was born on June 21, 1940 in London, his father was sitting behind barbed wire some 286 miles (about 460 kilometers) away on the Isle of Man in the middle of the Irish Sea.

His Austrian father, for whom he was named, was one of some 27,000 German, Austrian and Italian nationals interned as "enemy aliens" by the British government during World War II in camps scattered across the United Kingdom, with the largest on the Isle of Man. For Humpoletz Sr. and his approximately 1,200 fellow German and Austrian internees at Hutchinson camp in Douglas, the Isle's capital city, internment meant hardship, deprivation, and disillusionment. 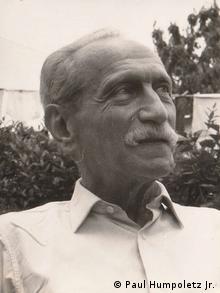 Paul Humpoletz Sr. spent about a year in the Hutchinson Camp on the Isle of Man

But artistic and intellectual activity also flourished at Hutchinson, contributing to a unique cultural legacy that the Ensemble Émigré, a chamber ensemble that performs the works of émigré German and Austrian composers, is bringing alive through music.

"Public opinion at the beginning of the war was really against Germans," Norbert Meyn, founder of Ensemble Émigré and a tenor, told DW. "There was this general suspicion," even though the UK had taken in refugees from Germany prior to the outbreak of the war.

Britain's generally welcoming spirit of the 1930s evaporated once the UK declared war on Germany on September 3, 1939. Suddenly, some 70,000 Germans and Austrians in the UK - many of whom had been there for years - were classified as "enemy aliens." Special Home Office tribunals reviewed all such individuals and determined whether they posed a security risk to the country, warranting their immediate internment.

Fewer than 600 individuals were initially interned, but the situation changed as Nazi forces advanced on the Western Front in the spring 1940, conquering first Belgium and then France. Foreign nationals became increasingly suspected of sabotage and collaboration with the enemy.

Italy's declaration of war on the UK on June 10, 1940 prompted British Prime Minister Winston Churchill to issue his infamous "Collar the lot!" cabinet order, which began blanket roundups of not just Italians but also the still at-liberty German and Austrian nationals. 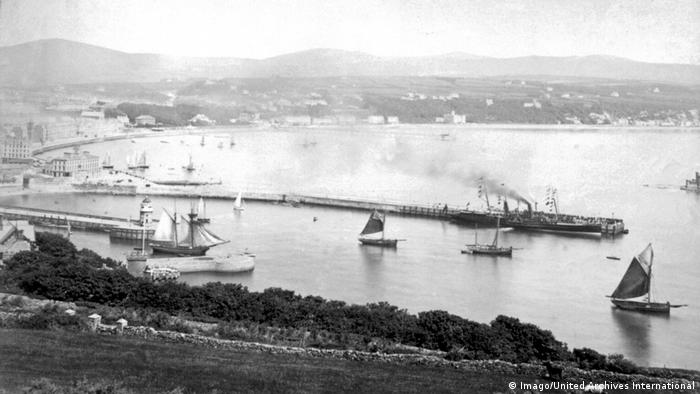 During World War II, German exiles - both Nazi sympathizers and refugees - were interned on the Isle of Man

For journalist Peter Gillman, co-author of "Collar the Lot!" alongside his wife Leni, World War II internment "reflected a paranoia about refugees." Without condoning the mass internment, Gillman nevertheless described it as "understandable."

"Britain was alone in the fight against Germany, under attack by the Luftwaffe and in fear of invasion," he told DW.

From refugee to suspect

Tragically and ironically, the internment surge meant that many who had fled Nazi camps found themselves behind British barbed wire. Paul's father was one of them.

"You may well ask!" Paul laughed, when asked by DW how his father - a prominent anti-Nazi political cartoonist who was forced to flee to the UK after escaping Nazi incarceration - could have been considered a possible Nazi sympathizer and threat to Britain. "They just scooped everybody up, whoever they were, didn't matter, and just bundled them off," Paul said.

Though Humpoletz Sr. was taken away around February 1940 before mass internment began, he eventually landed at Hutchinson camp after it opened in July to accommodate the influx. 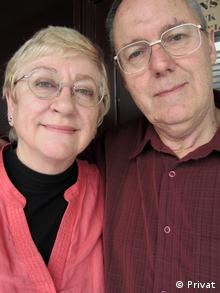 Peter and Leni Gillman authored the book "Collar the Lot!"

Hutchinson camp was a place of contrast. Prisoners slept two to a bed - sometimes a Nazi sympathizer and Jewish refugee were bedmates - in Douglas' Edwardian boarding houses that had previously hosted summer vacationers. Paul remembers his father describing "barbed wire everywhere" and the constant presence of soldiers, who often roughed up or stole from the prisoners.

Internees "became very disillusioned about the British Tommy who they had long admired," Paul said. But the internees took solace and hope from the rich intellectual and artistic life that they created in the camp.

"There are legends about the camp 'university,'" Meyn said, referring to Hutchinson's daily timetable of lectures ranging from Shakespeare to Byzantine music to Greek theater - all offered by internees. He told DW how one composer said he never gave more concerts than when he was in Hutchinson.

Meyn is bringing the story of these artists and their lives in Hutchinson back to the Isle of Man.

On May 16 and 17, the Ensemble Émigré will perform "What a Life!" in Port Erin and in Douglas - the first time the chamber piece has returned to the island since its August 1940 premiere in the Douglas Palace Theater. The bilingual German-English musical revue tells the tale of interned German refugees. Composed by Austrian internee Hans Gal from his Hutchinson hospital bed, the revue was produced and performed entirely by internees.

"They created something that was artistically really, really special but humorous and expressed their sentiments" on being refugees who were corralled and interned in a foreign land, Meyn said. 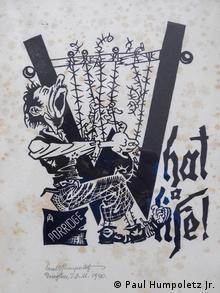 The original program design for "What a Life!" by Paul Humpoletz Sr.

"This music can open up a window into parts of human experience that is otherwise very hard to understand and capture," he added.

Meyn, himself a German-born, long-time UK resident, also believes the stories of those involved in the revue show how migration helps infuse and reinvigorate culture, rather than threaten or dilute it.

Art to save the soul

Paul's father played a key role in the revue's premiere, contributing the sharp yet woeful program design - a man playing a barbed-wire lyre on a box of porridge, Hutchinson's staple food.

Paul believes his father's involvement in theatrical stage designs and posters made camp life "bearable" through the focus and purpose the artistic activity provided.

"He found that very stimulating, and it compensated for the deprivation," Paul said of his father's feelings. Still, he pointed out that Humpoletz Sr. was always reluctant to speak of his time in Hutchinson. "One had to squeeze stuff out of him," Paul said.

Paul's father was released in February 1941, and went on to contribute to British politics through cover artwork for the popular magazine "The Leader." Many other internees went on to establish careers within British creative circles, despite a suspicion toward former enemy aliens that lingered after the war's end. 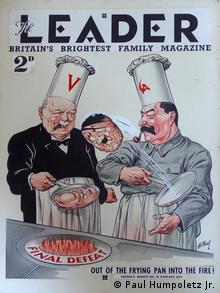 "I was actually asked to leave the first primary school I went to because I had a foreign name," Paul said. Humpoletz Sr. began signing his illustrations as "H. Paul" to appear less foreign.

Journalist Gillman admitted that his 1942 birth year meant he "grew up with a dislike of Germany that has now been completely reversed." Sadly, he once again sees a fear of the "other" today in the UK.

"We have to hope that the strains of decency, generosity, charity and unselfishness that are present in the British character eventually win out," Gillman said.

Paul's father eventually relocated to Switzerland and then to Vienna, where he died in 1972. Despite his internment, Humpoletz Sr. spoke warmly of the UK and valued the time he lived there.

"They had given him sanctuary," Paul explained, adding that his father "really valued British cultural life and the liberal attitude of the Brits."

As a British national, Paul finds the UK's turn away from European culture and the EU project disheartening. He, like his father, thinks the UK has "an important contribution to make."

No matter what, the art of Paul Humpoletz Sr. and other internees will continue to bridge the channel.