A kiss for your tie? Why Carnival kicks off with gender power games

Women take charge of men on Carnival Thursday by cutting off their ties and giving them a kiss. The tradition hails from an era when women's rights didn't exist. This year, the #MeToo movement is also leaving its mark. 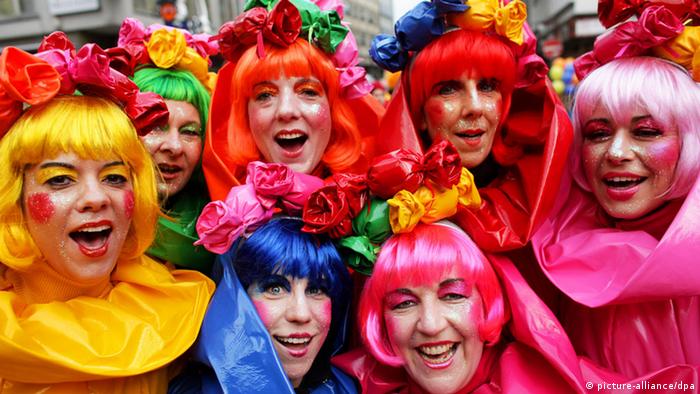 It's a kind of unofficial holiday in the Rhineland region of Germany. The party starts at 11:11 a.m. on the dot, and the pubs and streets burst with costumed revelers, alcohol and kitschy folk music known as "Schlager."

Maintaining your personal space is not exactly an option; close bodily contact with strangers is just as much a part of Carnival as music and beer. People link arms and sway to the Schlager, or do the "Stippeföttche," a traditional dance that involves rubbing rear ends together. Strangers "bützen" ("smooch") and touch each other up. 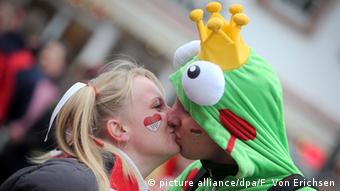 Smooching is called 'bützen' in the local dialect

Read more: Enjoy Carnival in Cologne: 11 tips from a native

But this year's revelry takes place amid the rise of the #MeToo movementand associated debates addressing everyday sexual harassment and assault against women. The movement has therefore raised questions as to whether Carnival traditions, which some would consider cheeky and others inappropriately sexually-charged, are still appropriate in this day and age.

However, those familiar with Carnival traditions also know that many of these date back hundreds of years and served as ways for women to freely express themselves — and often also their frustration with male-dominated society.

It all started with laundry women

Weiberfastnacht — the Thursday before Carnival Monday and the official start of the Carnival weekend — is one such tradition that dates back centuries.

In the Middle Ages, upper-class woman were allowed to throw their manners out the window on this day, which was dubbed "the drinking day for dear women."

In the 18th century, some convents even recognized the anything-goes tradition and the nuns were permitted to feast, gamble and dance until the wee hours of the morning.

In the 19th century, a group of washerwoman in Beuel near Bonn, around 30 kilometers (about 19 miles) south of Cologne, laid the foundation for the present-day Weiberfastnacht celebrations.

Back then, the washerwomen had to work 16 hours a day — and not only for the high-society men who could afford it; they also had to scrub their own husbands' dirty laundry so that the men could go to Carnival parties in nearby Cologne in clean shirts. The wives had to stay at home to work and tend to the children. 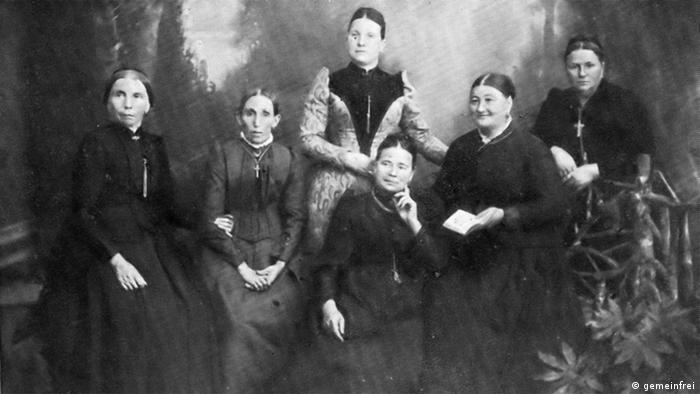 A group of rebels? The Beuel Ladies' Committee pictured in the year 1900

Storm the city hall, chop off the ties

In 1824, the washerwomen had finally had enough. They ditched their work and met in a pub to complain about their husbands. Obviously, they weren't just sipping tea and coffee.

They founded the "Beuel Ladies' Committee" and proceeded to storm the city hall in Beuel, claiming authority for a day. The tradition stuck and Bonn-Beuel became an important Carnival hub.

Word of what the women in Beuel had done spread quickly throughout the Rhineland. Women in many other cities and villages formed similar committees and proceeded to storm their city halls as well. 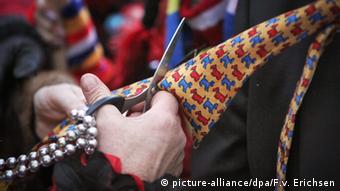 Men should only wear old ties on Weiberfastnacht

As a symbol of revoking the power of the men, the women started chopping off their neckties, which they collected like trophies. Of course, since the tradition is all in good fun, the men don't go away empty-handed. Instead, they get a "Bützchen" — a smooch — in return. In this ritual, it's the woman who chooses who she's willing to kiss, though the unwritten rule remains that both partners must consent to locking lips.

The #MeToo movement has permeated every branch of daily life and society, so it is no surprise that it's influence is also felt at Carnival 2018. It isn't the first time that Cologne has confronted sexual harassment, however: the city has been tackling the topic in media and politics ever since the negative events of New Year's Eve 2015, when hundreds of women were assaulted amid crowds outside the main train station.

Yet some Carnival events and performances are bringing debates regarding sexism into their celebrations in a unique way: through critical satire. 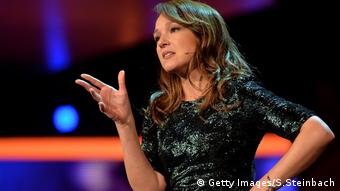 One Carnival cabaret performance swapped the stereotypical roles of a male boss and a female subordinate. In this performance, the female boss asked her male job applicant whether everything was in order with his prostate and then invited him to continue their interview in bed.

Another Carnival performance leader, Biggi Wanninger, chimed in on the suggestion that men are always seeking sex. "The average man has one brain and two balls. The power ratio seems pretty clear to me!"

Comedian Carolin Kebekus, however, took a different approach and humorously looked at how women in Carnival were empowered: "Whichever raggedy clown I take home is up to me and me alone!"

Why Trump is so popular at Germany's carnival celebrations

Cartoonists around the world love the new US President for his unique hairdo, but that's not all: as the Carnival season really kicks off in Germany, Donald Trump-style wigs are just about sold out. (17.02.2017)

To understand the "strange" Carnival culture, you'll need to learn a few typical expressions from the Kölsch dialect. If they're new to you, don't start doubting your German skills - most Germans don't know them either. (03.02.2016)

Carnival in Cologne: costume on - hysteria off?

For weeks now, Germany has had the impression that Cologne is a city in crisis. The authorities have been under pressure since the assaults on New Year's Eve. Will the citizens let these concerns spoil their festivities? (01.02.2016)