Nearly 13,000 residents from an upscale neighborhood of Frankfurt have been told to leave their homes so the bomb can be made safe. A 700-meter exclusion zone has been set up around the discovery site. 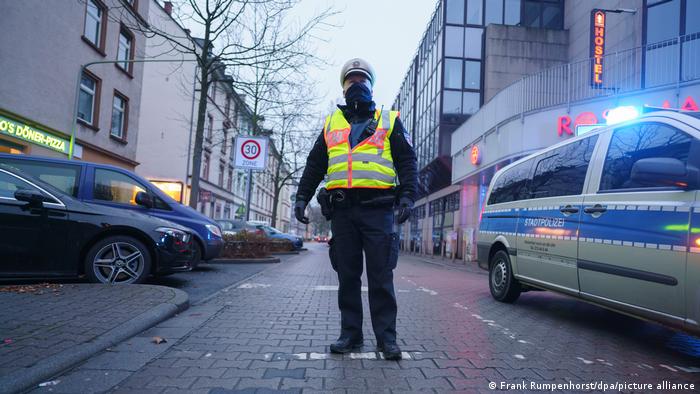 Thousands of residents from the Gallus district of Germany's financial capital, Frankfurt, were told to leave their homes in preparation for the safe removal of a  British 500-kilogram (1,100 lb) World War II bomb on Sunday.

Discoveries like this are regular occurrences all over Germany, including a so-called earthquake bomb found in October near the German-Polish border.

The company warned of delays and the rerouting of several long-distance and regional train services, especially between 11 a.m. and 6 p.m.

Residents who have no alternative accommodation until Sunday evening were advised to move to a nearby exhibition hall.

World War II: How Germany deals with its past

Officials warned that due to social distancing rules because of the coronavirus pandemic, the defusing could last into the evening.

The unexploded bomb was discovered on Thursday on a construction site.

The local fire brigade said the size and design of the explosive could create massive damage and be a danger to life.

Authorities have set up a 700-meter (0.43 mile) exclusion zone around the area.

Frankfurt was regularly bombed by Allied forces during the Second World War, which destroyed the largest medieval city in Germany, and killed more than 5,000 people.

Even 75 years after the end of the conflict, finding unexploded ordnance is still relatively common.

In June, a 500-kilogram bomb was discovered on the grounds of Frankfurt's convention center.

In July 2019, another large explosive was discovered near the headquarters of the European Central Bank. It forced the evacuation of 16,500 people.

In September 2017, around 65,000 Frankfurt residents were told to leave their homes so a two-ton bomb could be safely defused. The incident was the largest public evacuation since the end of the war in 1945.

A detonator with an explosive device from the Second World War has been found during an apartment clearance in the northern German port city. The controlled explosion prompted the evacuation of the nearby area.

A quarter-ton World War II bomb was discovered in the Kreuzberg district of Berlin. Thousands of people were evacuated from their homes as police set up a radius around the unexploded ordinance.

ICYMI: Three stories to make you smile 16m ago