Experts have defused a World War II bomb in Frankfurt after the largest evacuation in Germany since 1945. More than 60,000 people had to leave their homes as the device was made safe.

In the early evening, Frankfurt police announced the bomb had been made safe, with a police tweet reading: "It's done! World War bomb in Frankfurt successfully defused!'

Pedestrians, cyclists and public transport were the first to be allowed to return, as car drivers were asked to let ambulances go before them. It was still expected to be hours before everyone could return to their homes.

Thousands of residents were forced to evacuate a Frankfurt district on Sunday before experts began the operation at a construction site where the device was found earlier in the week.

Authorities cleared nearly 60,000 people from a 1.5 kilometer (0.57 square mile) area in the Westend district, warning that the 1.8 metric ton (4,000-pound) bomb could flatten an entire block if it exploded.

Hospital patients and the elderly were among those affected in what was Germany's biggest evacuation in recent history.

The high capacity bomb, also dubbed a Blockbuster, was one of thousands dropped over Germany by the Royal Air Force during the final years of World War II to cripple the Nazi war machine and demoralize the German population.

Authorities warned that if the bomb had exploded, the shock wave could have caused widespread damage throughout the western part of the city.

By 3 p.m. local time (1300 UTC) police reported that one fuse had been successfully removed from the device and two hours later, the second was removed:

According to the local Frankfurter Rundschau, the bomb still had to be transported from the area meaning the streets might not be cleared for people and car traffic to return until 8 p.m.

The evacuation was completed and police tweeted a picture of the "ideal sight for an evacuation zone" at 2 p.m. local time (1200 UTC):

Ambulances and transport vehicles also helped move the elderly and sick from the area, which includes two hospitals and Germany's central bank.

The city's trade fair was used as a temporary shelter during the estimated four-hour bomb defusing operation. 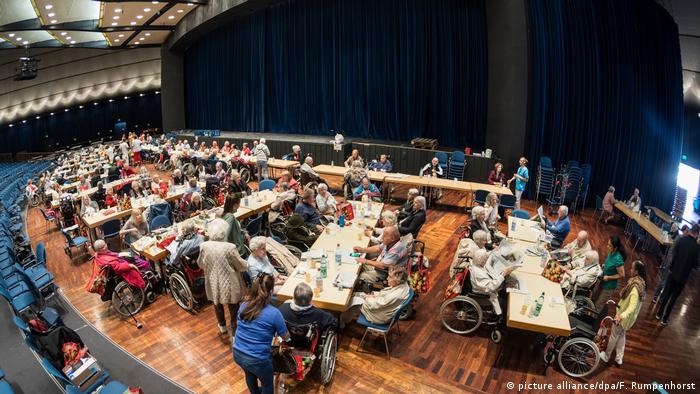 Evacuated residents wait for the all-clear at a temporary shelter

The bomb is believed to be a British bomb dating back to Allied raids on the city.

Such evacuations are common in Germany, where Allied air forces dropped 1.5 million tons of bombs that killed 600,000 people and flattened cities.  An estimated 10 percent of the bombs failed to explode.

In December last year, a British 1.8 metric ton blockbuster bomb was found in Augsburg. More than 54,000 people had to leave their homes on Christmas Day while it was defused.

That to date was the largest evacuation since the end of World War II more than 70 years ago.

On Saturday, about 20,000 residents in Koblenz were evacuated to allow experts to defuse a half-ton US bomb. 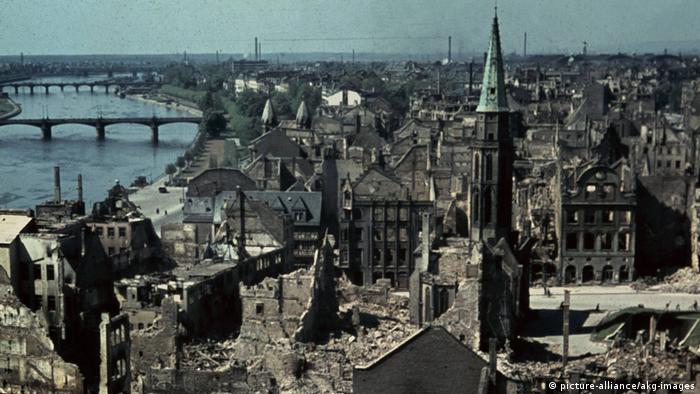 A view of bombing destruction in Frankfurt's old town in 1945.

Air traffic above the German capital was thrown into chaos by the discovery of an unexploded bomb. Flights were diverted to Berlin's unfinished airport. (30.08.2017)