German town lives with lethal legacy of World War II | Germany | News and in-depth reporting from Berlin and beyond | DW | 07.11.2010

Oranienburg has more unexploded bombs in its soil than any other German town or city. This week, another bomb was removed from its soil, a reminder to residents that they still live with lethal remnants from the war. 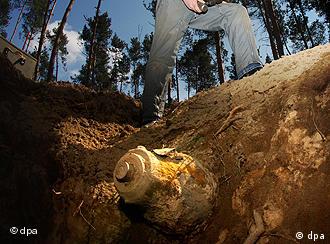 The streets were eerily empty, and there was no one to be seen in the well-kept gardens and houses in this eastern German town. 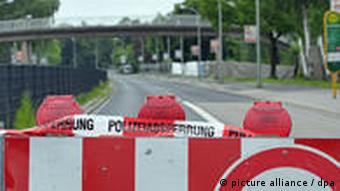 Parts of Oranienburg became a no-go area for some 4,500 inhabitants

This was good news for the 57-year-old deputy head of Oranienburg's fire brigade, since it meant local residents had obeyed orders that required them to evacuate this part of town as of 8 o'clock that morning.

Residents were generally "calm and composed in view of the evacuations," he said.

After all, it was the 159th bomb that has had to be removed in 20 years, and since this time about 4,500 people had to leave their homes "the numbers were not unusually high."

Most went to work as usual, or went to stay with friends and family outside the no-go area. Temporary shelters were arranged for the people with no where else to go in a church and buildings owned by the municipality.

During World War II, Oranienburg was the target of massive bombing raids flown by the United States and Britain. 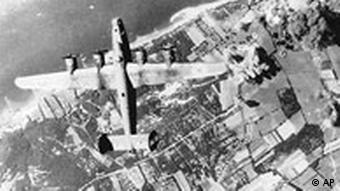 The Allies dropped more than 10,000 bombs, each weighing 500 lbs. or 1000 lbs. (250 or 500 kg), to destroy targets such as the Heinkel-Werke aircraft manufacture plant, a railway junction for trains to the eastern front and an arms depot belonging to Hitler's elite SS soldiers.

The Auer-Werke, a chemical company situated close to the town center, endured especially massive bombardment, since it was thought to produce chemicals used in Nazi atomic bomb research.

According to Wolfgang Spyra, a bomb researcher at the Technical University of Cottbus, the bombs had a dud rate of between 7 percent and 15 percent. Taking that information and deducting what has already been removed in Oranienburg, his team estimates that there are still at least 325 bombs underneath the town.

In early 2010, Spyra went public with a study into Oranienburg's unexploded bombs, which he based on original documents, including aerial photos and bombardment plans, and American and British war archives.

His study found that the bombs still underground remain extremely dangerous, largely because most of them have delay-action detonators which have become brittle after 65 years.

"They could cause the bomb to go off any day," he said.

There have been three spontaneous explosions in Oranienburg since 1991, resulting in several injuries.

When they were dropped 65 years ago, many bombs didn't explode due to Oranienburg's soft soil, which has a hard layer of gravel underneath. Bombs would often penetrate the earth, bounce off the gravel and come to rest underground with their tips pointing back upwards.

Positioned vertically, gravity stops the chemical detonators from working. The detonators contain a vial of acetone that bursts on impact and is meant to trickle down and dissolve a celluloid disk that restrains the cocked firing pin.

But when the bomb is pointed upwards, the acetone seeps away from the celluloid. 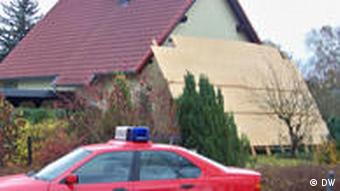 Houses in Oranienburg were protected to prevent damage from the blast

Bomb No.159 had a chemical detonator "worn and twisted to an extent that makes any manual defusion impossible," said Horst Reinhardt, one of Germany's most experienced bomb disposal experts.

For the head of Brandenburg's state-run Explosive Ordnance Removal Service, the bomb is 150th he has removed and, at eight meters (26 feet) down, the deepest one he has ever found.

It lay in a small wooded area, surrounded by dozens of houses, with some of them roughly 50 meters away.

Disposal experts erected walls of wood to deflect the force of the blast. Engineers had put sheet piling around the bomb and filled the space in-between with water. Bales of straw were stacked on top of it. 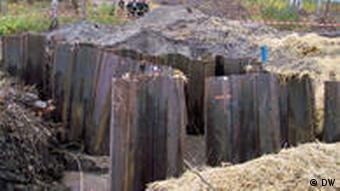 The explosion left a huge crater and torn metal pilings, but spared the houses

Around midday, the bomb was detonated, and from as far as a kilometer away a shower of earth, water and straw thrown up into the air was visible.

"When I heard the explosion, it was the first time I really felt scared," said Guenther Dregler, whose house was the one closest to the bomb site.

But he was able to breathe a sigh of relief after he returned. The only sign of distress to his property was a few books that had fallen off a shelf.

But while Dregler's worries may be over for now, town authorities will be living with the headache of unexploded ordinance for a long time. 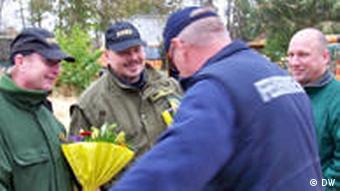 Flowers for the heros of the bomb disposal crew

"Proactive bomb searching and removal in Oranienburg won't be a matter of months and years," said bomb researcher Spyra. "It will be a matter of decades."

It's also an expensive proposition, costing up to 420 million euros ($597 million) to remove all of the 325 bombs authorities expect to find.

In view of the danger for the people of Oranienburg, authorities this week barred all heavy traffic from some of the most contaminated streets in the town. This summer three bus routes were changed to minimize the risk to passengers.

Although digging up and disarming undetonated bombs from the Second World War is a fairly common occurrence, a bomb squad in the city Goettingen got a tragic reminder that these bombs can still be deadly. (02.06.2010)

A new book by a Berlin historian claims Nazi Germany built and tested nuclear weapons before the end of World War II. The claims, if true, would mean a rewriting of history, but many have doubts about the theory. (14.03.2005)

Sixty years ago Sunday, Allied bombers attacked Dresden and the thousands of residents and refugees who lived there. Traces of the militarily dubious decision to bomb the city remain visible today. (13.02.2005)