30 years after the Berlin Wall: An African perspective

Three decades after the fall of the Berlin Wall, reporters from DW’s Africa department set out to discover what has changed in eastern Germany. Join Asumpta Lattus on her voyage to better understand Germany. 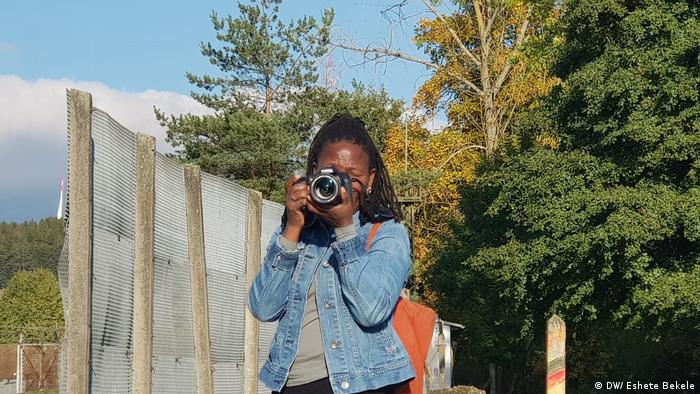 Asumpta Lattus visited the tiny village of Mödlareuth, which like Berlin was split into two countries

"Be curious. Ask stupid questions. I know that there are no stupid questions … Make your own observations and compare it to the situation in Africa," we were told by Claus Stäcker, head of DW's Africa service, as he sent us off from Bonn on a trip that would take us 2,000 kilometers (1,243 miles) from the southeast to the northeast of Germany, to the territory of the former German Democratic Republic (GDR). "But why send Africans to do a job meant for Germans?" I asked Stäcker. He laughed and said: "Germans have been telling about the day when the Berlin wall came down for 30 years now. It will be interesting to hear new perspectives."

Before leaving Bonn, I read a lot of articles and watched several features on the fall of the Berlin Wall. I knew that many eastern Germans were happy when it happened 30 years ago, because they won back their freedom to travel and to speak out without fear of government reprisal. I was touched by the pictures from November 9, 1989, showing elated Germans dancing on the Berlin Wall.

So we were sent on a trip to discover Germany, one of the most respected countries in Europe. It is also a country that spends millions of euros to fight injustice, bad governance, corruption and human rights abuses in developing countries.

In Bischofferode, a town in the federal state of Thuringia, we visited the former Thomas Müntzer potash mine. It was closed down in 1993, against a backdrop of protests and hunger strikes by the miners. The government went ahead nonetheless, arguing that the mine wasn't productive enough. 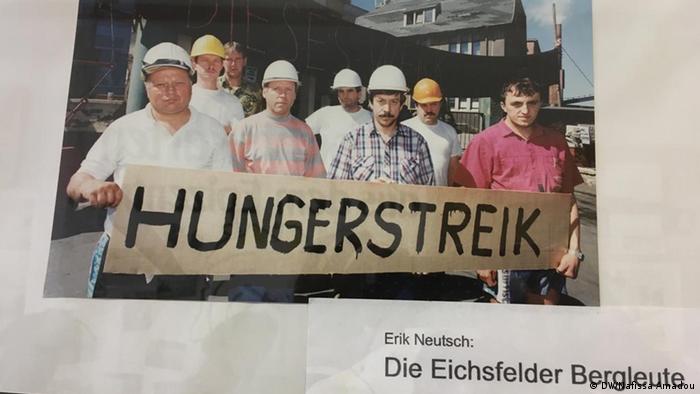 Willibad Nebel was among those who protested at the time. He is still angry and disappointed today. What he told us about the impact of the closing of the mine sent chills down my spine and made me forget where I was. Was I still in Germany or somewhere else? Mining was the source of livelihood for him and more than 700 other miners.

Trying hard to control the trembling in his voice, Nebel explained why many people in this town would not vote for Chancellor Angela Merkel's Christian Democrats (CDU) today. "Voters are reacting in defiance. The CDU and similar parties haven't done anything positive for many years," Nebel said.

Driving down the streets of Bischofferode we understood what Nebel meant. Most election posters hanging on lamp posts were from the far-right Alternative for Germany (AfD) party and a couple from for the socialist Left party. There were no CDU posters. Two weeks after our tour, I was not surprised to learn that the AfD got more than 20% of the vote in Thuringia, even if the Left Party won the election. Although he wouldn't vote for the AFD, Nebel blamed Germany's ruling party for the results, because of the injustices inflicted on eastern Germans after the wall. First among them was the performance by the Treuhand, a public agency which facilitated the privatization of eastern companies, including the one in Bischofferode. At the time, all laid-off workers were promised compensation. 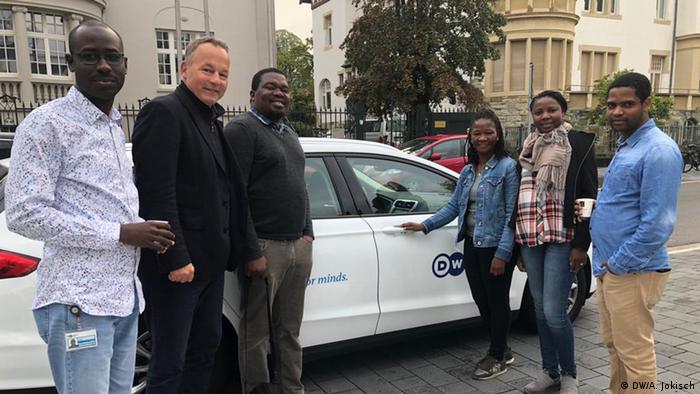 The agency gave the miners about 7,500 marks (about €4,000 in today's money or $4,450). Workers in other federal states were given up to 70,000 marks, Nebel said. He added that the paltry sum was an attempt to silence them. "We had to sign a paper to promise that we were not going to sue the state. Otherwise we wouldn't have gotten the money," Nebel told DW.

He added that they were lucky that lawyer Bodo Ramelow, now the state premier of Thuringia, 30 years ago took up the fight for the people of Bischofferode. "Otherwise we wouldn't even have gotten that money," Nebel said. For its part, the CDU government promised thousands of jobs. "Seventy jobs were provided, that was all," he added.

The exodus of people who left Bischofferode mirrored changes across the country: Millions left the former East to look for jobs elsewhere, turning many places in the east into ghost towns. Younger generations moved away and continue to do so. In many small towns and villages, only the elderly are left. 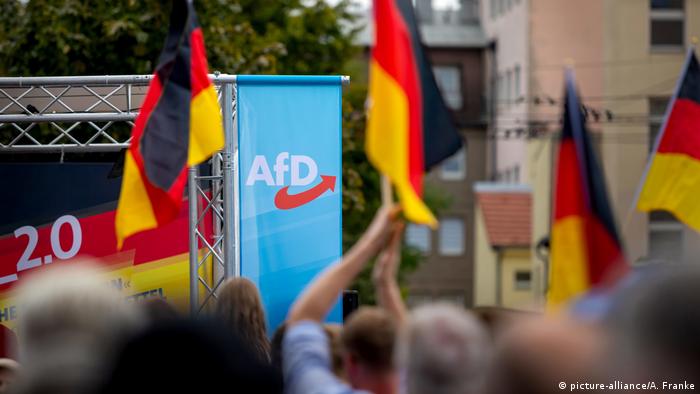 From our conversations with people in the east I understood all the complaints we heard were nothing new. Every year, when the country commemorates the fall of the wall or German reunification, journalists arrive in droves in Bischofferode and similar places. They all want to talk to the locals about their plight and learn the differences in their lives before and after the wall. At the beginning, the locals were happy about the interest and willingly shared their stories.

They talked openly and told the media everything they wanted to hear, hoping that something would soon change. Today, most are over 70 years of age and don't like to speak to journalists anymore. They are tired of being asked the same questions over and over again, said Gerhard Fiedler, a tour guide in Mödlareuth, in the southeast of Germany.

Known as "Little Berlin" when there was still an inner-German border, Mödlareuth has a history of being a divided hamlet since 1810, when it was part of the Kingdom of Bavaria and the Duchy of Reus. Many thus saw it as a symbol for Germany's division. With the founding of the GDR in 1949, one side fell to the Federal Republic of Germany and the other to the socialist republic. On October 3, 1990, after reunification, a part of the village was included in the federal state of Bavaria, while the other was placed under Thuringian administration. Even today, with just 47 residents — 16 live in Bavaria and 31 in Thuringia — Mödlareuth has two mayors, two car number plates, two postal codes and two postal delivery people.

The wall is gone but mistrust is not 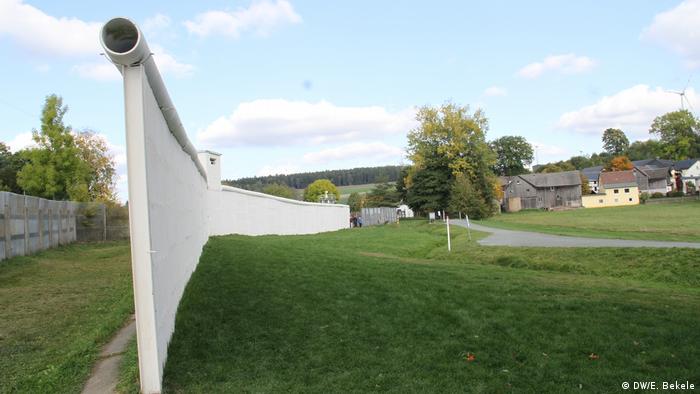 The wall in Mödlareuth did not have a checkpoint. It was built to keep people from the east to mingle with or even say hello to people in the west. Here I was reminded that the 1,400 kilometers wall had been real. The experiences of eastern Germans at a time when they had no freedom of expression and couldn't trust even their neighbors for fear of being spied on are deeply ingrained in their minds.

People who travelled to Mödlareuth to see the remains of the wall were friendly to the African journalists from Bonn, but not always easy to talk to. When we tried to ask Astrid Eicheler from eastern Berlin some questions, she said: "Before I talk to you, I would like to see your identity cards."

I thought she was joking, because I was holding a microphone with the DW brand. So I went ahead anyway with my first question, but she insisted: "I need to see your IDs." I have been living in Germany for a decade and I have never been asked for identification on the street, not even by the police. It took me a couple of days to understand why this happened.

Things got clearer when we visited the Marienborn border checkpoint. There we were told that in the former GDR, people had bad experiences with the permanent state surveillance by the government, which planted spies everywhere. Many people were driven to self-censorship and also learned to mistrust strangers, we were told. 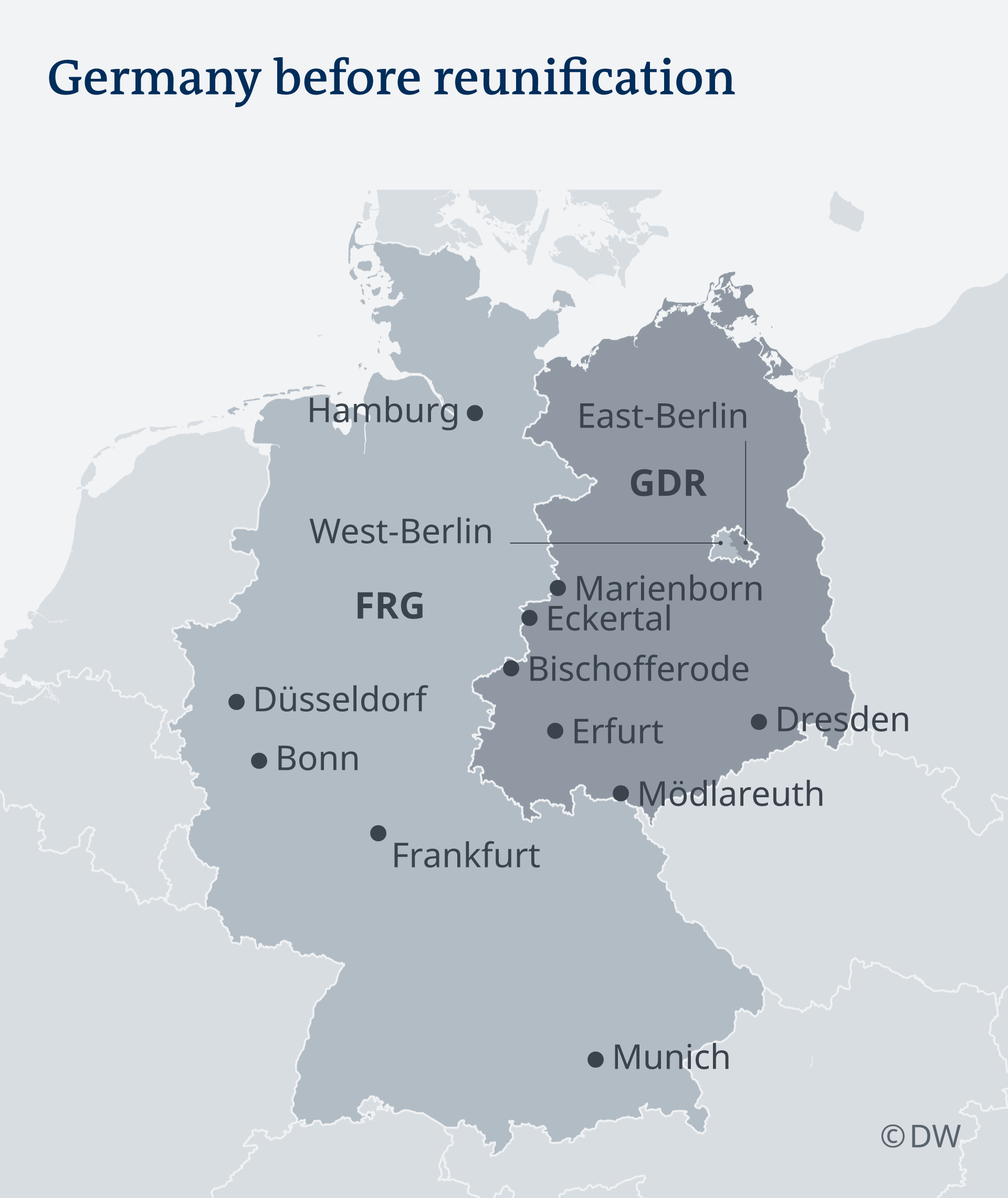 Germany before reunification in 1989

In contrast, I was surprised by the warmth by which we were received by our tour guide at Marienborn, where we arrived two hours late. Angelika Maedick said she didn't mind waiting, because the majority of people visiting Marienborn — the largest and most important border checkpoint of the GDR — are Korean. "We don't get many Africans," she said. The historian has worked here for more than a decade. Her three-hour tour on a site as long as 50 football fields was chock-full of history. I wouldn't have learned so much by reading up on articles to prepare this story.

Maedick explained that the history of the border wall goes back to 1945, when the four victors of World War II, the United States, France, the United Kingdom and the Soviet Union, divided Germany into four occupation zones. In 1947, Moscow decreed a shoot-to-kill policy at the border, which the GDR later kept up. It was responsible for the killing of hundreds of East Germans who tried to cross the border until the day the wall came down. I was surprised to learn that the wall was first built in Hötensleben as early as 1952, and expanded south and north from there. No one was allowed to speak about it until the wall was officially built in Berlin overnight in 1961. I had always thought that the wall was only built that year. 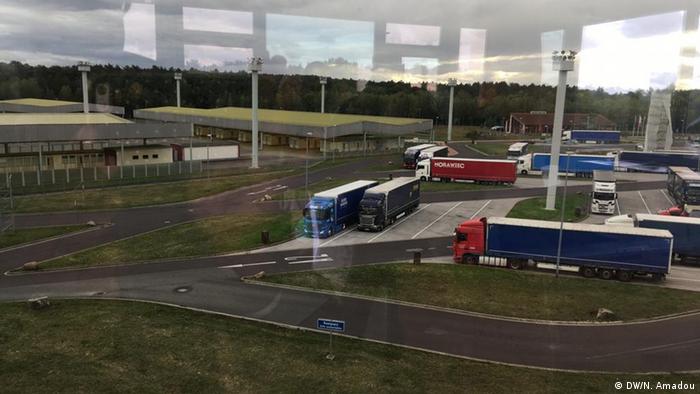 Marienborn was the biggest border checkpoint between the two Germanys

Looking back many people we talked to were happy about the peaceful revolution of 1989, which brought about the reunification of Germany. Astrid Eicheler said it was a gift from God. "I can't express it any other way. And reunification is a big task. It will take time for it to be completed," she said.

Relief when the wall came down

Maedick, who personally knows some former guards at the border, told us that many are happy knowing that they and their children don't have to do that anymore. "Some told me that they used to be happy at the end of a shift if they didn't see a fugitive. It was unusual for them to shoot at their own people," she said.

In some villages like Eckerthal, in the Harz region, people are happily preparing for the celebration of the fall of the wall in their town on November 11, two days later than in Berlin. "At the time, we could see that in Berlin everyone was dancing on the wall. But here border controls were taking place as usual," said Peter Röhling. Together with other young people he went to see the officers and made them open up the wall. While there were two Germanys, Röhling's father lived in the west and he lived in the east. Special permissions were needed all around for everybody to visit with each other,

The former miners in Bischofferode want to convey a message to Germany's chancellor: "Ms. Merkel, please do not only support big enterprises. Remember also the companies in the former GDR and its citizens. You yourself were also a GDR citizen."

This trip was only the beginning of my journey to better understand this country, its politics and its people. For me, one thing became very clear: Germany's reunification is going to take some more time.

Thirty years after German reunification, there are still systemic economic and psychological problems to overcome, the government's top official for eastern affairs has said. (25.09.2019)

Berlin honors victims 58 years after the Wall was built

Victims of Berlin's former Soviet-era Wall, whose construction began 58 years ago, are being remembered in the capital. German President Frank-Walter Steinmeier has warned of 'new walls' in electoral thinking. (13.08.2019)