After the Islamic State extremists have seized the majority of Yarmouk, around 2,000 people have been evacuated from the camp. Meanwhile, the al-Qaeda-linked al-Nusra front has claimed neutrality in the battle. 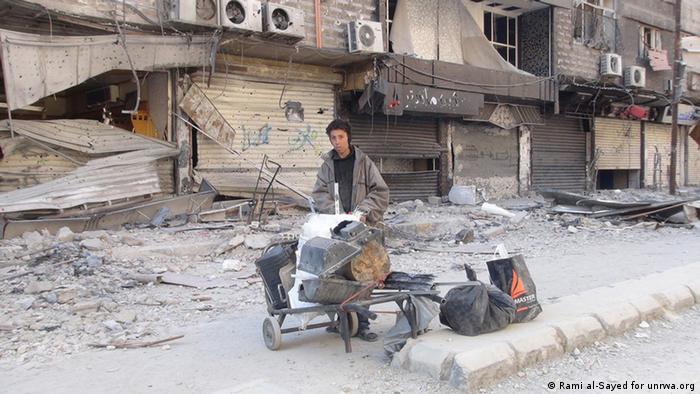 A Palestinian official told the French news agency AFP on Sunday that about 2,000 people were evacuated from the refugee camp, after the "Islamic State" (IS) militants took over most of the Palestinian refugee camp.

Meanwhile, according to the Britain-based Syrian Observatory, the al Qaeda-linked al-Nusra Front claimed neutrality in the battle in Yarmouk. It said it will not engage in ongoing fighting between IS militants and their Palestinian rivals and will make efforts to end the violence, the monitoring group reported on Sunday.

"We have taken this decision due to the deteriorating humanitarian situation in the area," the Observatory quoted the Nusra Front as saying.

On Saturday Rami Abdel Rahman, the Syrian Observatory director, said Nusra fighters were not battling alongside IS forces but were also not opposing its advances, the news agency AFP reported. Nevertheless, the Palestinian officials accused Nusra of facilitating IS's entrance into Yarmouk.

The Islamic State extremists group launched an advance into the camp on Wednesday and seized the majority of the camp. The Syrian Observatory reported on April 4 that about 90 percent of the camp was in the hands of IS militants.

Outside the Assad regime, inside the IS

"The camp is surrounded by the regime, and inside the forces of IS have almost completely taken over," said Ayman Abu Hashem on Saturday to AFP. He heads the Syrian opposition interim government's committee on Palestinian refugees.

He also added that the Palestinian forces from the Aknaf Beit al-Maqdis group, affiliated with the Hamas movement, were encircled by the jihadists.

The German news agency, DPA, reported on airstrikes by Assad regime warplanes on the camp.

The camp has been under siege for more than two years from Syrian government troops.

Refugee camp once home to 160,000 Palestinians

Yarmouk's residents have suffered through regular clashes, government shelling and a regime blockade that has caused medical and food shortages.

Officials from the UNRWA, the UN agency for Palestinian refugees, told AFP on Saturday that the situation in Yarmouk was a "source of universal shame".

Syrian President Bashar al-Assad has said any talks with the United States would have to be based on mutual respect. Some 440,000 people in Syria are living under siege conditions, according to the UN. (27.03.2015)