Islamic militants are said to have taken over most of the Palestinian refugee camp of Yarmouk, south of Damascus. The "Islamic State" group and the rival al-Nusra Front appear to be cooperating in the attack. 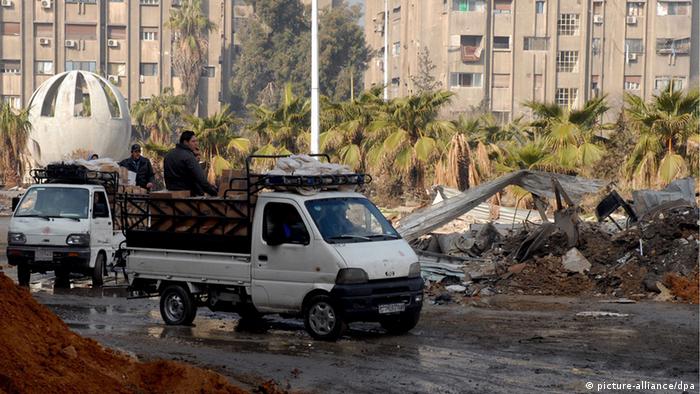 "Islamic State" (IS) has taken control of 90 percent of a Palestinian camp on the Damascus outskirts, a Syrian monitoring group said on Saturday, as fighting continues for the fourth day.

According to the monitoring group, about 18,000 civilians have suffered years of bombing, army siege and militia control in the Palestinian refugee camp of Yarmouk.

'IS' and Nusra Front cooperating

They say the militants include IS and the Nusra Front, al Qaeda's affiliate in Syria. The two groups are rivals in Syria but appear to be cooperating in the attack on the Yarmouk camp.

The Syrian Observatory for Human Rights said IS and the Nusra Front made gains overnight, pushing into the northeast of the district, close to central Damascus.

Only a few kilometers from Assad

IS militants had stormed the Yarmouk camp on Wednesday. The group's offensive in Yarmouk gives it a major presence in the capital.

IS is now only a few kilometers from President Bashar al-Assad's seat of power, the news agency Reuters reports.

According to the Syrian observatory's website, Yarmouk is also witnessing "violent shelling by the regime forces using tank shells and ground-to-ground missiles."

The United Nations has said it is extremely concerned about the safety and protection of Syrians and Palestinians in the camp. Most of the residents have now left.

"The situation in Yarmouk is an affront to the humanity of all of us, a source of universal shame," UN Relief and Works Agency (UNRWA) spokesman Chris Gunness said. "Yarmouk is a test, a challenge for the international community,” he added.

Yarmouk was home to half a million Palestinians, even before the Syrian conflict began in 2011.

More than 220,000 people have been killed in Syria, and half of the population (about 10 million) has been forced to flee their homes since the conflict erupted in March 2011.