Food aid has entered the besieged Yarmouk refugee camp in Damascus for the first time in four months. The delivery comes after reports that dozens of people in the camp have died of hunger and lack of medical aid. 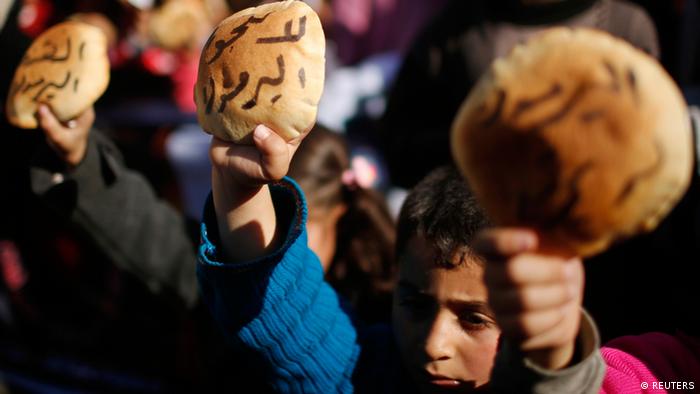 The aid was delivered on Saturday to the Yarmouk Palestinian refugee camp in southern Damascus, a Palestinian official and Syrian state media said.

Palestine Liberation Organization (PLO) official Anwar Abdul Hadi confirmed the delivery to the AFP news agency and said it was made possible after an agreement was reached on Friday between Palestinian factions and rebels in the camp.

Damascus is seeking a regional cease-fire and a prisoner swap with opposition fighters, the Syrian foreign minister has said. The news came during a press conference in Moscow just days ahead of Syria peace talks. (17.01.2014)

He said Saturday's delivery was a trial run and "further batches will be delivered successively from tomorrow." He also said a number of sick and injured people will be evacuated from the camp on Sunday with help from the aid group the Syrian Red Crescent.

Yarmouk camp is the largest of the Palestinian refugee camps in Syria where, up until December 2012, more than 160,000 refugees lived. However, after armed rebel groups entered the camp, most fled leaving behind some 20,000 people.

The delivery was the first time food aid has reached the Yarmouk refugee camp since September 2013 when President Bashar al-Assad's government troops tightened a siege around the camp.

Since then, numerous attempts by the UN and other organizations to bring aid to the camp have been thwarted amid reports that as many as 54 people have died in the camp of hunger or lack of medical care.

The delivery came one day after UN rights chief Navi Pillay said the obstruction of humanitarian aid by the government to civilians “may amount to a war crime.”

"Government forces and affiliated militias appear to be imposing collective punishment on the civilians in Yarmouk," Pillay said.