The Islamist jihadists' presence in the Syrian civil war is growing. Their acts of terrorism have come to dominate the political handling of the crisis. The main beneficiary of the new situation is the Assad regime. 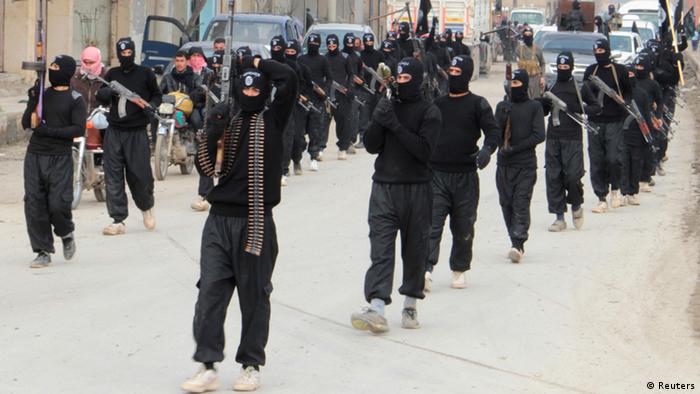 The photos on the Internet are shocking: bloody bodies of massacred men, who were supposedly found in areas dominated by the terrorist group "Islamic State of Iraq and the Levant" (ISIL). While the photos' authenticity cannot be independently confirmed, they have served their purpose: alerting the world to the horror spread by the foreign jihadist groups, particularly ISIL, fighting in Syria.

The groups have further divided the fractured opposition to Syrian President Bashar al-Assad. At first, Syrian rebels had welcomed the foreign fighters because of their weapons and war experience. But the reports about the jihadists' reign of terror changed everything. The rebels and the jihadists became enemies. Over the last two weeks alone, more than 1,000 people died in the fighting between secular Assad-opponents and jihadist groups like ISIL, according to the Syrian Observatory for Human Rights. The London-based NGO has documented the civil war in Syria since the beginning and claims that 130 of the most recent victims were civilians and 20 of them were executed. 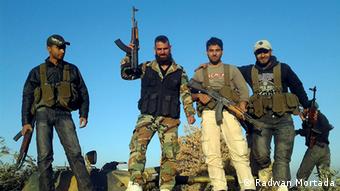 Most of the photos and reports online seem to have been uploaded by civilians not involved in the fighting. But the texts and pictures are part of the media war, and it is mainly the Assad regime that profits from the uproar caused by the pictures.

Ever since the civil war started, the regime called its opponents "terrorists," regardless of whether they were Syrian citizens or foreign jihadists. The word appears almost daily on the state news agency's (SANA) website. Thanks to the extremists who flock to the country from abroad, the regime is increasingly justified in using the term "terrorist." At the beginning, the word was merely used to denounce the opposition, but it's becoming a political reality.

"The regime sits back and watches its self-fulfilling prophecies edge closer and closer to the truth," Arabic online magazine "Al Monitor" wrote.

This reality represents a political gain for the government. Western nations have changed their priorities in the face of extremists' increasing power in Syria. While Western governments initially supported the rebels' fight against Assad, they are now approaching the regime - not because they've changed allegiances, but because they're worried about the spreading terrorism.

The so-called war on terror has become the basis for a partnership among the United States, Russia, Europe and China, political analyst and columnist Raghida Dergham wrote in the London-based Pan Arabic newspaper "Al Hayat." Like other nations around the world, Syria says it is fighting terrorism as a means of justifying its military actions, according to Dergham.

"But it doesn't just use the label 'war against terror' for that," she said. "The regime also wants to avoid any future accountability this way."

Extremists could save Assad

By taking up the war against terror, the western nations gave up their original goals, wrote Dergham. "They walked right into the trap Damascus and its allies set up to distract Washington, London and the others from their original path," she added.

The plan seems to be working, Middle East expert Guido Steinberg from the German Institute for International and Security Affairs (SWP) said. He said the current development strengthens Assad's hand. After all, the US policy on Syria focuses more and more on the war on terror, according to Steinberg: "And when they switch to that, Assad will be safe."

Ahead of peace talks scheduled for next week in Geneva, however, US Secretary of State John Kerry said the US would work toward a transition in Syria that does not include Assad remaining in power.

A new topic for the Syria Conference 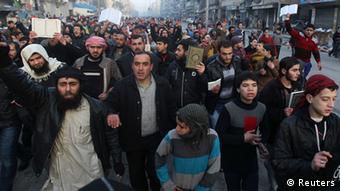 More and more Syrians protest against the jihadists from abroad

The Assad regime apparently wants to take another step toward that safety at the Syria Conference in Switzerland January 22. Syrian news agency Sana reported on its website that Russian Foreign Minister Sergey Lavrov met with his Syrian colleague Walid al-Moallem in Moscow January 17.

Both politicians, according to Sana, agreed on the goals they wanted to reach at the conference in Geneva. "We hope that the conference will bring a political solution of the crisis in Syria," al-Moallem said. "That's the safest way to implement the Syrian people's interests, among which the fight against terrorism is paramount."

The conference's original goal was to end the violence in Syria and install an interim government. Now, Syria and Russia lobby for the war against terror.

That presents Western states with a choice between cooperating with a regime responsible for the death of 100,000 Syrians or dealing with religious extremists who present a threat to more than only Syria.

If the Western governments ally themselves with the Assad regime, they can be seen as supporting a brutal dictator. If they don't, they could be setting themselves up for the accusation of not taking care of their own citizens' safety - particularly if Western citizen fighting with jihadists in Syria return home.

Whatever Western leaders choose, Islamist terror is a time bomb, according to Guido Steinberg.

"The danger posed by the jihadists has already grown to a dimension that changes our view of the conflict," he said. "The storm that's brewing over there just hasn't arrived in German politics yet."

Scores of people have died in fighting between Syrian rebel groups and al Qaeda-linked militants. The intra-rebel conflict has reportedly overshadowed the war against the Syrian regime in some parts of the country. (11.01.2014)

The influence of jihadist groups is rapidly expanding in both Syria and Iraq. Following an extremist agenda and using brutal tactics, the Syrian regime may benefit most from the militants' violent campaign. (08.01.2014)

Mideast expert Volker Perthes urges a ceasefire in the Syrian conflict to allow civil society to regroup - and contain the Islamists' growing influence. (30.12.2013)