1979 was a significant year for the Middle East, and not only because of the Islamic Revolution in Iran. Elsewhere, political Islam was beginning to show its might. The consequences still shape the region today. 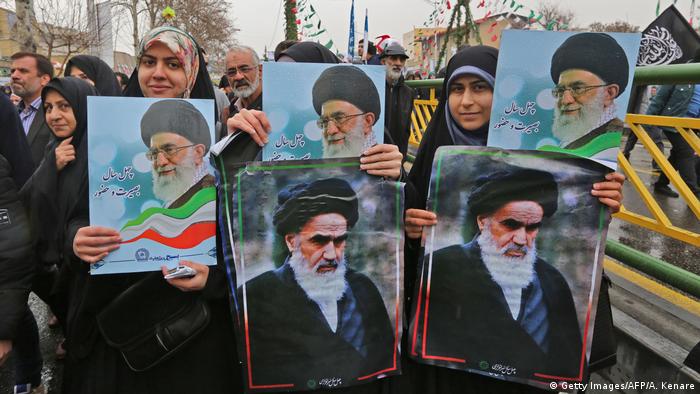 The pictures have a certain charm: Under an apple tree, surrounded by his followers, sits a mystic utterly immersed in his search for spiritual enlightenment. Khomeini led the 'most modern form of revolt,' according to Foucault

Before his return to Iran to become the supreme leader, Ayatollah Ruhollah Khomeini spent years in exile in France, including four months in the village of Neauphle-le-Chateau near Paris, just before his return in February 1979. He left a mixed impression on the French. Many were troubled; others saw him as a figure of hope.

French philosopher Michel Foucault, at the time an influential thinker on the global stage, praised Khomeini as a man with great plans: "This is perhaps the first great insurrection against the existing political order of the whole world: the most modern form of revolt — and the maddest."

That Foucault evaded the dictatorial predispositions of the preacher earned him a reputation of political naivete. But one thing proved to be true: Khomeini had launched a revolution of nothing less than global significance. Nowhere was it felt more than in Iran, its neighboring states and the entire Middle East region.

Revolutionary Islam, in the Shiite variant preached by Khomeini, immediately appealed to many Iranians. The US-backed Shah Mohammad Reza Pahlavi, who was overthrown in January a few weeks before Khomeini's return, had presided over the country with authoritarian violence for 40 years.

The shah used his rule to transform Iran into a Western-style state, a project that he ruthlessly pushed forward in spite of the country's traditions or human rights.

In the eyes of many Iranians, Khomeini stood for a societal model based on the complete opposite, one that was guided by religious principles. It would also restore social justice, the absence of which had brought suffering to many.

1979 would be the year that political Islam really made its breakthrough, although the idea of linking religion and politics wasn't new. One of the early forerunners was the Shiite preacher, Jamal al-Din al-Afghani, born in 1838. Al-Afghani pretended to be a Sunni in order to teach at the Sunni Islam Al-Azhar University in Cairo, Egypt.

It was here that that al-Afghani called on his students to "leave your indifference behind," and to "live free and happy as other peoples — or die a martyr." The idea of insurrection based in religion as brought into the world.

That concept continued to develop — since the 1920s, mainly by Sunni Muslim brotherhoods — and fully matured to enter the world stage in 1979. It was shaped by three events: Khomeini's revolution in Iran; the 1979 siege of the Grand Mosque at Mecca in Saudi Arabia, carried out by hundreds of Sunni Muslim fundamentalists led by Juhayman al-Otaybi; and the invasion of Afghanistan by the Russian Red Army, which led to the emergence of the Taliban, backed by the US. Three events, one message: radical Islam as a political protest movement was now a force to be reckoned with.

Anwar Sadat, Egypt's president from 1970-1981, also recognized the power of Islamism. He sought a common understanding with the Muslim Brotherhood and released many of its representatives from prison. Soon after, however, he again took a strong position against radical Islamists.

Mohammad Shawqi al-Islambouli was among those arrested and abused. His brother, Khalid, went on to assassinate Sadat in October 1981. The act was, on one hand, a protest against Egypt's reconciliation policy with Israel, but also an act of revenge for his brother.

Political Islam was a powerful reaction to the brutality of Arab regimes, both secular and religious. This was obvious in Iran with the fall of the shah, the storming of the American Embassy and the subsequent hostage-taking of diplomats that stretched for more than a year. Shiite revolutionaries openly sought confrontations with the US. Many Muslims closely followed the events in Tehran, sympathetic to the cause. The regime of the mullahs seemed on its way to becoming the new vanguard of the Islamic world.

The spread of political Islam was a nightmare for the House of Saud. While the Saudi ruling family was also religious, they abhorred the social-revolutionary agenda dominating Tehran. They responded by emphasizing the country's dominant religion, the conservative Wahhabism, like never before.

Over the years, Saudi Arabia's clergy reissued and renewed religious laws. The goal: to focus the attention of the faithful so much on the right execution of faith that they had neither time nor energy for politics —especially revolutionary politics.

The model was, and remains, successful: the strict Wahhabi teachings have found followers throughout the Muslim world, with the vast majority of Sunni fundamentalists taking the path of Wahhabism.

What the Saudis didn't predict back then was that the influence of the ultra-conservative Wahhabi Islam would also pave the way for jihadism, and Islamist terrorism.

Since 1979, radical Islam, both Shiite and Sunni, has filled gaps where secular governments have either failed or — as in Iraq under Saddam Hussein or in Syria under Hafez al-Assad — descended into dictatorial regimes.

To opponents of these failed leaders, political Islam seemed the only trustworthy way to reform political and social conditions. It attracted countless Muslims — but those who chose this path were also more likely to radicalize.

This religious and political combination left little room for moderate voices, and would eventually lead to the attacks in the US on September 11, 2001. Jihadism would intensify even more after the US-led invasion of Iraq in 2003.

Over the years, the mullah regime in Tehran and the rule of the Saudi royal family in Riyadh have developed into religious dictatorships. At the same time, new jihadi groups such as the "Islamic State" (IS) began engaging in a newfound brutality, one not seen in the region for a long time, perhaps never before.

But Iran and Saudi Arabia, the leading powers of the Shiite and Sunni Muslims, have become further and further estranged. Once rivals, now enemies, today they wage proxy wars in Syria and Yemen — sparked by a violent legacy that began back in 1979.

Every day, DW's editors send out a selection of the day's hard news and quality feature journalism. Sign up for the newsletter here.Iran's leader says 'Death to America' means to Trump, not people

Forty years after the Islamic Revolution, the regime in Iran appears to be firmly in the saddle, thanks to its effective use of violence and censorship, but it may not continue for long, says DW's Jamshid Barzegar. (11.02.2019)

Forty years ago, Ayatollah Ruhollah Khomeini founded the Islamic Republic of Iran. There is little excitement left from those times; even pro-reform forces are exhausted, except for the women among them. (11.02.2019)

Tehran has blamed Saudi Arabia, the UAE and the US for acting from the shadows in the terror attack on a military parade in Ahvaz. Will Iran retaliate with military action as threatened — or is it just posturing? (24.09.2018)