Officials said the attack was one of the deadliest in years. Thousands have died in decades of conflict between Thai authorities and Malay-Muslim separatists in the south. 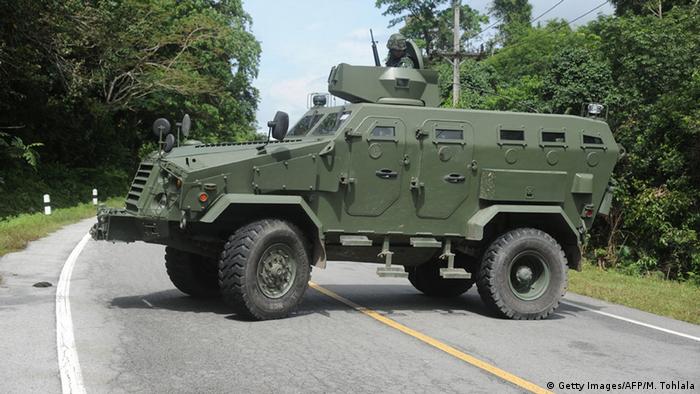 Archive image from 2015 of a Thai military vehicle

The late-night attack targeted a security checkpoint in southern Yala province. An unknown number of assailants then used explosives and scattered nails on roads to slow down a response from security forces.

"This is likely the work of the insurgents," Colonel Pramote Prom-in, a regional security spokesman, told Reuters news agency.

"This is one of the biggest attack[s] in recent times," he said.

Thailand's three most southern provinces of Pattani, Narathiwat and Yala have faced a Malay-Muslim separatist insurgency since 2004 that has claimed nearly 7,000 lives.

Government symbols and representatives are often the target of attacks.

Yala, Pattani and Narathiwat were part of an independent Malay-Muslim sultanate before predominately Buddhist Thailand annexed them in 1909.

Violence has plagued southern Thailand for decades, with Muslim separatist groups demanding independence for the ethnic Malay people. Activists say the humanitarian aspect of the conflict has largely been overlooked. (27.10.2016)

A conflict between the Thai military and Muslim rebels has been simmering for nearly two decades in the country's south. After a drop in violence, there is now a sense that the situation could take a turn for the worse. (06.11.2018)

Six explosions, one near a famous skyscraper, have hit Bangkok as US Secretary of State Mike Pompeo attended a regional security summit. Unconfirmed reports suggest that other devices were found across the city. (02.08.2019)