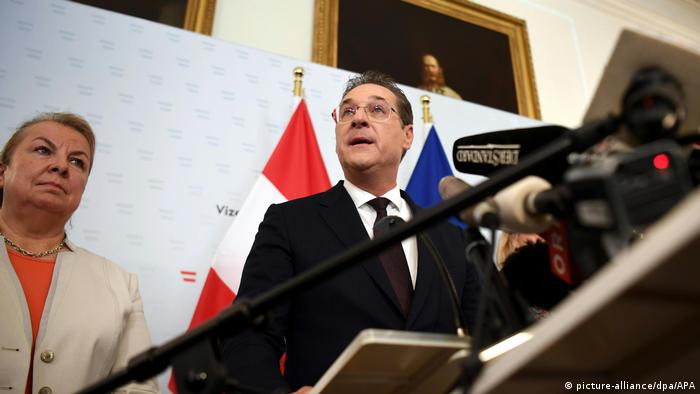 Austrian Chancellor Sebastian Kurz has accepted the resignation of Vice Chancellor Heinz-Christian Strache in the wake of the release of a video showing Strache discussing the possibility of exchanging friendly media coverage for lucrative state business deals.

In a statement delivered from his office at noon, a visibly angry Strache said he was stepping down to protect the work of the government, but added that he had been the victim of illegal entrapment and a concerted "dirty campaign" to discredit him. He also rejected any suggestion he had committed any crimes.

"My person must not be the reason to undo [the government's work], and perhaps to provide a pretext to break up this government, because that was the aim of this illegal ... action," he said. "This was a targeted political assassination," he added.

A spontaneous demonstration of some 2,000 - 3,000 people has also gathered outside Chancellor Kurz's office in Vienna, demanding new elections.

The vice chancellor admitted the video released on Friday showed him in a compromising situation, in which he had been tempted into "polemicizing about everything." "And yes, looking at them soberly, my statements were catastrophic and extremely embarrassing," he said.

"Yes, it was stupid, it was irresponsible, and it was a mistake," he said. "It was typically alcohol-induced macho talk, in which, yes, I was probably trying to impress the attractive hostess. I behaved boastfully, like a teenager, and acted embarrassingly over the top." He went on to apologize to his wife, "the most important person in my life."

Strache's departure leaves the chancellor with the choice of either dissolving the government and calling new elections, or attempting to maintain his coalition with the FPÖ under a new leader. Austrian media reported Kurz would call for new elections during a speech later on Saturday.

Strache was caught on video offering business deals to a woman posing as a Russian oligarch's niece in exchange for her help boosting the FPÖ's news coverage. According to Strache, the woman had told him she wanted to move to Austria and invest money.

The video was reportedly filmed on the Spanish island of Ibiza in July 2017 but only disclosed on Friday by Germany's Der Spiegel and the Süddeutsche Zeitung. A woman calling herself Alyona Makarova can be heard telling Strache and FPÖ parliamentary group leader Johann Gudenus that she is very wealthy and wants to buy as much as 50% of Austria's largest newspaper, the Kronen Zeitung.

According to the Süddeutsche Zeitung, the meeting lasted several hours, with Strache and Gudenus (whose wife was also present) discussing with Makarova and a male companion about how indirect donations and friendly media coverage could help the far-right party. The video was apparently recorded a few months before the Austrian national election in October 2017, when the FPÖ took 26% of the vote and entered government.

Makarova reportedly claims to be interested in the paper so that she can provide favorable pre-election coverage of the FPÖ. Strache and Gudenus describe to her ways in which rich sponsors could donate to the FPÖ via non-profit organizations, so the donations do not become public.

Strache tells her that the Kronen Zeitung deal could push the FPÖ from 27% up to 34% in the vote, and proposes a number of ways in which he could repay the woman, including shifting state infrastructure contracts away from Austrian construction giant Strabag to her yet-to-be-founded companies. 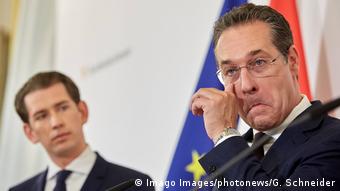 In response to the release of the video, Strache and Gudenus told Der Spiegel and the Süddeutsche Zeitung that throughout the meeting they had emphasized the "necessity of conforming to Austrian law," and that they had only been talking about potential donations to the FPÖ or non-profit organizations.

They also told the papers that the conversation had happened in a "loose, informal, and boozy holiday atmosphere." and that the absence of a professional translator had created a language barrier. In the video, Gudenus can be heard translating into Russian.

Meanwhile, Peter Burtz, manager of German satirist Jan Böhmermann, confirmed to the Deutsche Presse-Agentur news agency that the comedian had been aware of the video weeks ago, but denied the material had been offered to him.

This admission shed light on a joke Böhmermann made during an Austrian TV awards ceremony in April, when he said he couldn't appear personally because he was currently "coked up and full of Red Bull, hanging round in a Russian oligarch's villa on Ibiza with a few FPÖ business partners." He also said he was in negotiations to take over the Kronen Zeitung.

Strache referred to this joke in his statement on Saturday, when he said he "wondered what role Böhmermann played in connection with this."

Böhmermann gave an interview to Austrian public broadcaster ORF earlier in May criticizing the FPÖ's plans to change the country's financing system for public broadcasters. ORF courted controversy afterwards by "distancing itself" from the interview.