A South African court has ruled that corruption charges against President Jacob Zuma should be reinstated. The charges relate to a murky arms deal from the 1990s. 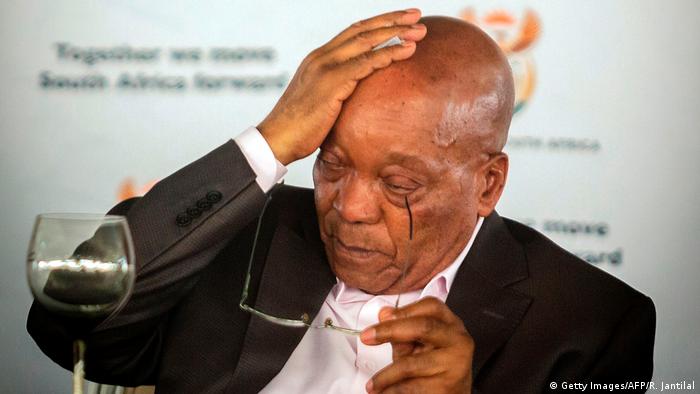 South Africa's Supreme Court of Appeal on Friday ruled that hundreds corruption charges against President Jacob Zuma could be reinstated.

The court upheld a High Court ruling from last year that a decision by National Prosecuting Authority (NPA) to drop nearly 800 corruption and fraud charges against Zuma in 2009 was irrational.

Zuma, who has faced multiple scandals that have seen his support tumble, had challenged the High Court ruling.

"It is difficult to understand why the present regime at the NPA considered that the decision to terminate the prosecution could be defended," Judge Lorimer Leach said after the court's unanimous ruling.

The NPA must now decide whether to proceed with prosecution.

Read: South Africa's power family, the Guptas: What you need to know

The corruption charges against Zuma relate to a kickback scheme in multi-billion dollar defense deals with European companies in the 1990s.

The charges were initially brought forward in 2005, before Zuma became president.

Shabir Shaik, an adviser to Zuma, was convicted in 2005 of corruption and fraud over the shady arms deals.

It is unclear whether Zuma will challenge the Supreme Court decision in the Constitutional Court.

"Finally, after almost a decade of ducking and diving, and squandering millions of rands of public money on his own legal fees, President Jacob Zuma will now face 783 charges of corruption, fraud and racketeering for stealing the people's money," it said in a statement.

The court decision comes as the ruling African National Congress (ANC) party is preparing to elect Zuma's successor in December.

Zuma has faced repeated calls to resign, even from some within his own party, over several scandals that have plagued his administration.

Recently, his association with the influential Guptas, a family of Indian immigrant businessmen accused of looting state funds and influencing top government appointments for their own benefit has caused outrage among South Africans.

President Zuma has faced numerous corruption allegations in court. As the ANC is due to elect a new party leader, could Zuma's support of Nkosazana Dlamini-Zuma be a move to save himself? (18.09.2017)

They may not have been elected but they still hold considerable power and influence. Some of Africa's first ladies even have an eye for the presidency. Meet the women behind these leaders. (08.07.2016)