Zimbabwe vote was fair with 'no cheating' — electoral commission

Zimbabwe's electoral management body has ruled out rigging or cheating in Monday's landmark election. Preliminary results from the 'too close to call' ballot are expected to be announced Tuesday afternoon.

Zimbabwe's electoral commission (ZEC) said on Tuesday there had been no cheating in the country's first election since Robert Mugabe was removed from the presidency, after a rule of nearly 40 years.

Most of the 11,000 polling stations had finished counting the ballots and a verification process was underway, said ZEC chief Priscilla Chigumba.

The authority has five days to release the final result, however it said it expected to start announcing results from 1300 UTC. Chigumba said she was confident there had been no "cheating" and said the ZEC will respect the will of Zimbabweans. "We will not steal their choice of leaders, we will not subvert their will."

A local election observer group, the Zimbabwe Election Support Network, said in a preliminary report that it was concerned about the ZEC's independence ahead of the vote, reported Reuters news agency.

Zimbabwe's two main presidential candidates both claimed they were heading for victory. President Emmerson Mnangagwa, who had replaced Mugabe and is the presumed front-runner in the race, said on Twitter that his ruling ZANU-PF party was getting "extremely positive" data on the count.

Western diplomats and local observer groups said the race was too close to call.

In order to win, a candidate must reach a 50 percent vote threshold, otherwise the contest will move to a runoff on September 8. 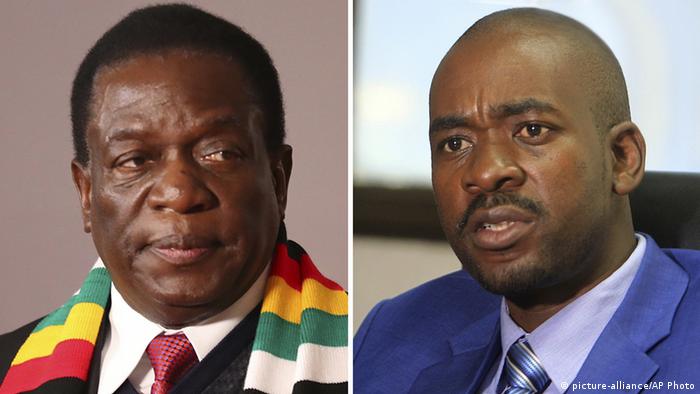 Millions of Zimbabweans flocked to the polls in large numbers on Monday. More than 5.5 million people were registered to vote and the estimated voter turnout was about 70 percent — higher than the last election in 2013. They are hoping the results will lift the country out of political stagnation after Mugabe's rule.

As well as choosing a president from more than 20 candidates and nearly 130 political parties, Zimbabweans voted for 210 members of parliament and more than 9,000 councilors.

kw/rt (AP, AFP, Reuters)
Each evening at 1830 UTC, DW's editors send out a selection of the day's hard news and quality feature journalism. You can sign up to receive it directly here.