Roughly 75 percent of 5.5 million eligible voters have cast their ballots in Zimbabwe's presidential election. The likely choice comes down to two men, neither of whom is called Robert Mugabe.

After Zimbabweans went to the polls in large numbers on Monday, citizens are eagerly awaiting the vote's result. Both main presidential candidates have expressed confidence that they will emerge victorious. The vote was the first since Robert Mugabe was removed from office after having held the post for 40 years.

The winner may not be determined for several days, as the final results of the presidential, parliamentary and local elections are due by August 4. A candidate must reach the 50 percent vote threshold to win, otherwise the contest will move to a runoff on September 8.

Zimbabwe Electoral Commission (ZEC) Chair Priscilla Chigumba said there was an estimated voter turnout of 75 percent. The figure would be larger than the last election in 2013.

"It is our view that the high voter turnout is indicative of a sound voter education and publicity conducted on a receptive electorate," Chigumba told reporters in Harare.

President Emmerson Mnangagwa, who had replaced Mugabe and is the presumed front-runner in the race, urged citizens to have patience, as the nation waits anxiously for the preliminary results.

The opposition has charged that voting results forms were not — as election law requires — posted at more than one-fifth of the country's polling stations. The Movement for Democratic Change (MDC) claimed that returns collected around the country so far proved, "beyond a reasonable doubt," that the party's presidential candidate, Nelson Chamisa, won the vote.

Senior MDC politician Tendai Biti has accused the electoral commission of, "deliberately delaying the announcement of results so that they can tamper with them." As opposition members gathered to celebrate victory — despite no official announcement from the government — police have continued to circle the streets of the capital, Harare, with water cannons. 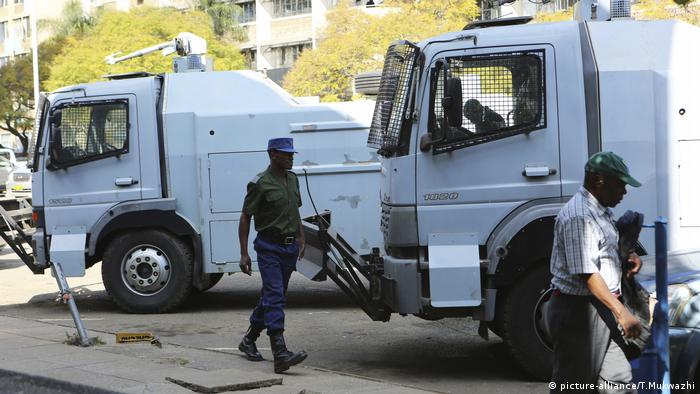 As the opposition MDC claims victory, police patrol the streets of the capital, Harare, with water cannons

Mnangagwa urged citizens to wait for the electoral commission's final count before making claims about the outcome of the vote. He reminded voters that the ZEC is the only authority constitutionally mandated to announce results. Preaching calm, he also took to Twitter to write: "Let us remember that no matter which way we voted, we are all brothers and sisters, and this land belongs to us all."

The leading candidates represented a contest between age, in the form of the 75-year-old Mnangagwa, and relative youth, in the 40-year-old Chamisa.

In all, there were 23 candidates, but none of them was the 94-year-old Mugabe, who came to power in 1980 and was obliged to leave it last November after a military coup.

Mnangagwa, Mugabe's long-term ally in the ruling ZANU-PF party and a politician known for his style as the "Crocodile," took over the presidency. He promised reforms and an economic recovery. 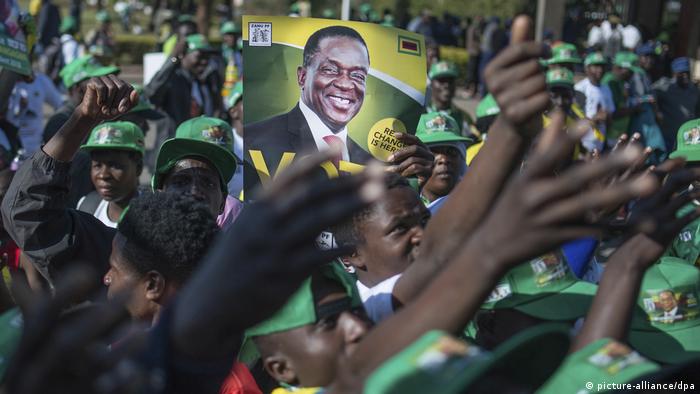 Mnangagwa told reporters on Monday that he is committed to a Zimbabwe in which people have the "freedom to express their views, negative or positive." He urged the country to remain peaceful during the landmark vote.

Mugabe, flanked by scores of chanting supporters, voted in the country's first election without his name on the ballot. The former president said on Sunday that he would not be voting for the ZANU-PF, which he founded. He hinted that he would be backing Mnangagwa's rival, Chamisa. 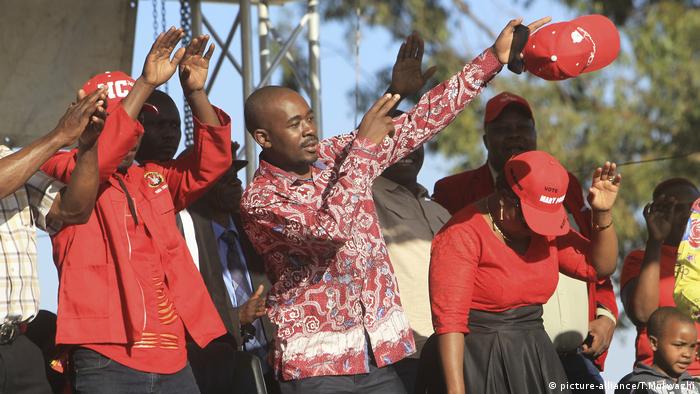 Head of the opposition MDC, Chamisa is a lawyer and pastor appealing to young and unemployed voters. They are seeking a change after 40 years of ZANU-PF rule.

After casting his vote, Chamisa said there was a deliberate attempt to "suppress and frustrate" the vote in urban areas where the MDC has strong support. He also said that, in the absence of vote rigging in rural regions, his party would win the election. His comments suggest that in the event of a Mnangagwa victory he will likely challenge the result.

The head of the EU Observer Mission in Zimbabwe, Elmar Brok, told DW that it was too early to say whether any irregularities had taken place.

"We have to see that the preparation was much freer, the atmosphere was much freer than in the past. So that is a bit of progress. But (whether) there's no cheating we do not know," he said. "Because what has happened with the printing of the ballot sheets and the voters' lists between printing and today? Are they the same? We have certain doubts because of the history, because of the cheating by the present government and the opposition."

Brok later told reporters the vote was "very smooth" in some places and "totally disorganized" in others. He said many voters, particularly young women, left voting queues in frustration at long delays.

About 5.5 million people were registered to vote, with nearly 130 political parties in the fray.

Chamisa: 'The vote is a vote for freedom'