Yemen's former President Ali Abdullah Saleh has been killed by Houthi fighters, his political party has confirmed. His death comes days after he abruptly ended a three-year-old alliance with Iran-aligned rebels in Yemen. 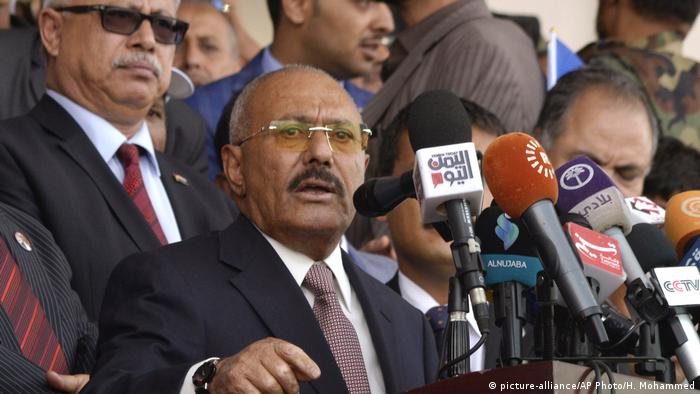 Officials of Saleh's General People's Congress (GPC) party said he had been killed outside the Yemeni capital, Sanaa. The Houthis' Interior Ministry said Saleh was killed by rebels from the Shiite group.

"The Interior Ministry announces the end of the crisis of militias and the killing of their leader and a number of his criminal supporters," an anchor from Houthi-affiliated Al-Masirah television said, referring to armed supporters of Saleh. The channel referred to Saleh and those who remained loyal to him as "traitors."

There were conflicting reports as to how the ex-president was killed. According to Houthi media, fighters blew up Saleh's house in Sanaa earlier on Monday, amid aerial attacks by Saudi-led coalition warplanes acting in support of the former president. The rebels reportedly stormed the house and confiscated weapons, before destroying the building.

However, Saleh's party said the ex-president had been killed outside Sanaa.

From unification to civil war

Saleh announced the end of his alliance with the Houthis on Saturday. He had jointly ruled the Yemeni capital with the Iran-aligned rebels for three years.

The 75-year-old Saleh had previously ruled Yemen for more than three decades after the country's unification but was toppled in 2012 after popular and political pressure during the so-called Arab Spring.

In late 2014, Houthis backed by Saleh loyalists captured the capital, prompting Yemen's internationally recognized government led by Hadi to flee to Aden. By March 2015, the Saudi-led coalition had launched  a deadly aerial campaign against the rebels.

More than 15,000 people have been killed, roughly half of them civilians, according to the UN.

The devastation has pushed the country to the brink of famine and prompted a cholera epidemic affecting nearly a million people.