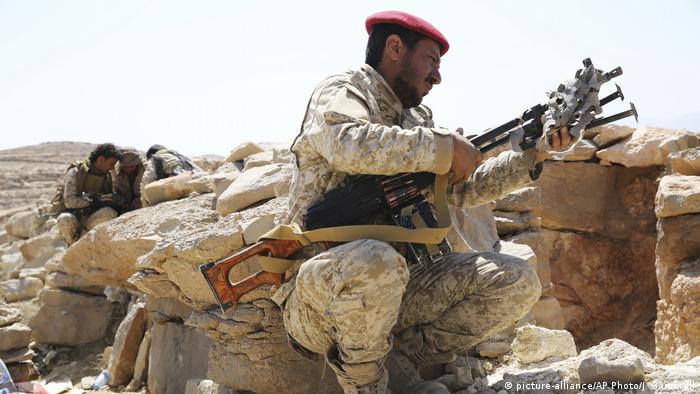 A missile attack on a Yemeni military training camp in the oil-rich province of Marib killed scores of soldiers, sparking outrage from Yemen's internationally recognized government on Sunday.

Saudi state television reported that at least 79 military personnel were killed in the strike on Saturday evening at the camp — which is located around 170 kilometers (105 miles) east of the capital Sanaa.

The ballistic missile strike hit a mosque located inside the camp during evening prayers on Saturday.

Yemen's internationally recognized government condemned the strike as a "cowardly and terrorist" attack, according to the official Saba news agency.

Yemeni President Abdu Rabbu Mansour Hadi told the military to be on high alert and ready for battle. He blamed the Iran-backed Houthi rebels for the deadly attack.

Hadi described the assault as an act of "blatant aggression'' that showed Houthis' "lawlessness'' and "unwillingness'' to make peace, according to Saudi Arabia's state-run news agency. The Yemeni president said the Houthis were acting as "a cheap Iranian tool in the region.''

Houthi rebels defended their deadly strike as an embarrassing defeat for the Yemeni government. "It appears that (coalition forces) have not learned the lessons of five years of fierce military confrontation,'' said Sharaf Lokman, a Houthi official. "Coalition forces have failed politically, militarily and morally.''

Read more: Longing for peace: The young Yemeni pushing for change from abroad

"This attack will be answered harshly,'' Magli warned in a televised statement.

The United Nations envoy to Yemen, meanwhile, delivered a stern warning about the attack and the recent spike in violence.

"The hard-earned progress that Yemen has made on de-escalation is very fragile. Such actions can derail this progress,'' warned Martin Griffiths.

Saturday's attack came after government forces, which are backed by a Saudi-led coalition, launched a large-scale operation against the Houthis in a region north of Sanaa.

The conflict in Yemen has killed tens of thousands of people since 2015 when Saudi Arabia and its allies intervened to back Hadi's government against the Iran-backed Houthi rebels.

The conflict has displaced millions of people, pushed the country to the brink of famine and created what the United Nations says is the world's worst humanitarian crisis.

An explosion has taken place at a football field where a southern separatist group was wrapping up a ceremony for new recruits. The attack has killed at least six soldiers and three children. (29.12.2019)