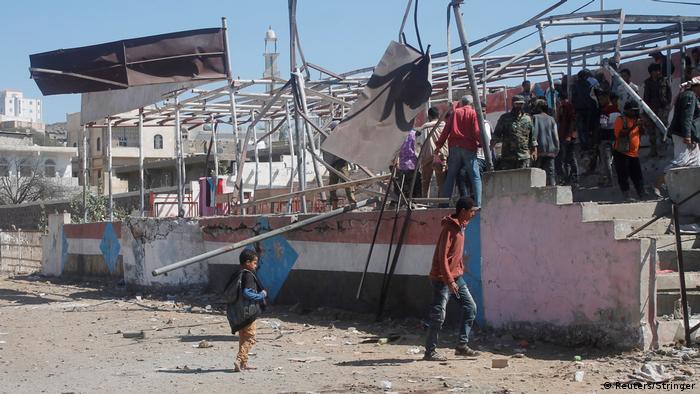 A ballistic missile fired at a military parade in Yemen on Sunday killed up to nine people and injured dozens more, security officials said.

The military ceremony took place in a football field in the town of Ad-Dali, the capital of Dhale province in southwestern Yemen.

More than 20 people were wounded in the blast, including civilians. Three of the nine people killed were believed to be children.

The southern separatist group, known as the Security Belt Forces, was about to finish a parade for its new military recruits when a rocket ripped through the crowd, a spokesman for the group, Maged al-Shoebi, told The Associated Press.

The Security Belt Forces are backed by the United Arab Emirates, an important ally in a Saudi-led coalition that has been fighting Iran-backed Houthis, Yemen's prominent rebel group.

The Security Belt Forces are currently at odds with Yemen's internationally recognized government, which has the support of Saudi Arabia.

While both Saudi-backed fighters and the Security Belt Forces are fighting Houthi rebels, divisions among the group have widened over the past several months between southern separatist and unionist factions.

Colonel Majed al-Shuaibi, chief of Yemen's military media center, blamed Houthi rebels for Sunday's attack. Houthi forces have been trying to seize Dhale province from the southern separatists for years but without success.

So far, there has been no claim of responsibility for the attack.

The 2014 takeover of Sanaa by Houthi rebel forces has since left the country in chaos. President Abed Rabbo Mansour Hadi's government was forced out of the capital. Members of the government first escaped to the south of the country and ultimately to Saudi Arabia, which entered the conflict in 2015.

Yemen, on the brink of famine, is the poorest country in the Arab world. Over 100,000 people have been killed in the war and millions are left suffering food and medical shortages.