Yemen's Houthi rebels have said they want to participate in UN-sponsored peace talks, but only after a complete ceasefire. Saudi-led airstrikes against the group continued Wednesday, despite Riyadh's plan to stop them. 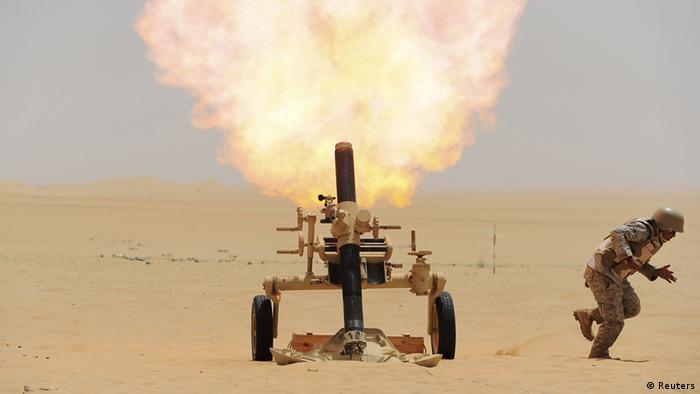 Houthi rebels in Yemen demanded a complete end to Saudi-led airstrikes Wednesday as a condition for their participation in United Nations brokered peace talks.

"We demand, after a complete end to the aggression against Yemen and the lifting of the blockade, to resume political dialogue…under the sponsorship of the United Nations," Mohammed Abdulsalam, the spokesperson for the Houthi rebels said Wednesday in a statement.

The statement appeared following the Arab coalition's announcement on Tuesday that it was halting its airstrike campaign, but would continue targeting Houthi rebels within Yemen who are suspected of receiving support from Iran.

Meanwhile, unnamed security officials in southeastern Yemen told the Associated Press that an apparent US drone strike had killed seven al Qaeda fighters in the port city of Mukalla on Wednesday.

The officials, who spoke on the condition of anonymity, said the overnight airstrike had hit a parked car near the presidential palace in Mukalla, the capital of Hadramawt province, which jihadists overran earlier this month.

The White House, which has previously supplied logistical and intelligence support to the Saudi-led coalition, deployed an aircraft carrier Wednesday to observe Iranian vessels.

US officials maintain that the warships off the coast of Yemen were not deployed to conduct maritime security operations but to intercept Iranian arms shipments into Yemen.

"Right now their ships are in international waters," Obama said Wednesday. "There's a reason why we keep some of our ships in the Persian Gulf region and that is to make sure we maintain freedom of navigation."

"What we've said to them is if there are weapons delivered to factions within Yemen that could threaten navigation, that's a problem," he said.

Following Obama's announcement, US Republican leader John Boehner said that distributing US warships to Yemeni waters was "the right thing to do."

Boehner added he hoped however that Washington's involvement was not needed.

The Red Cross warned Wednesday of a "catastrophic" humanitarian situation in Yemen.

Robert Mardini, head of the International Committee of the Red Cross in the Middle East, said that food supplies were rapidly running out, hospitals and health centers were virtually non-operational and supplies to vital medicine was not available.

"The humanitarian situation is nothing short of catastrophic," said Mardini.

"The country is almost living on its reserves…fuel supplies have reached zero levels," he told the AFP news agency, adding the price of food had increased 20 percent since airstrikes started more than a month ago.

Since March 26, the Saudi-led coalition has been attacking the Houthi rebels and fighters loyal to the country's ousted former President Ali Abdullah Saleh.

According to UN estimates, some 7.5 million people in Yemen require humanitarian assistance as fighting among Houthis, al Qaeda militants and loyalists to elected President Abed Rabbo Mansour Hadi, who has fled to Saudi Arabia, grows more intense. Airstrikes by the Saudi-led coalition have affected 18 of Yemen's 22 governorates, UN officials have said.

Some 150,000 people have been displaced in the conflict, the UN's Office for the Coordination of Humanitarian Affairs said, citing local sources.

US President Barack Obama used a television interview late Tuesday (local time) to call on Iran to assist in finding a political solution to the crisis in Yemen.

In an interview with US broadcaster MSNBC Obama acknowledged the crisis in Yemen and expressed hope "that we can settle down the situation."

"What we need to do is bring all the parties together and find a political arrangement. It is not solved by having another proxy war in Yemen," he added.

"We've indicated to the Iranians that they need to be part of the solution, and not part of the problem," Obama said.

The president further accused Tehran of supplying arms to Houthi rebels who have seized power in Yemen, prompting the month-long Saudi-led Arab airstrikes.

Tehran has said it supports the rebels, but denies supplying them with arms.

Houthis have taken over a loyalist military brigade in Taiz, Yemen's third largest city. But as regional actors call for a political solution, southern militias vow to step up their fight against the rebels. (22.04.2015)

US warns Iran about shipping weapons to Yemen

US President Barack Obama has warned Iran against shipping weapons to Shiite Houthi rebels in Yemen. The warning comes as the Saudi-led coalition ended its month-long campaign of airstrikes targeting the rebels. (22.04.2015)

According to Saudi state TV, the Saudi-led coalition has announced an end its military operation in Yemen. In a statement, the coalition said that the focus would now be on security, counter-terrorism and aid. (21.04.2015)