World Trade Organization in trouble: What you need to know | Business | Economy and finance news from a German perspective | DW | 11.12.2019

World Trade Organization in trouble: What you need to know

The World Trade Organization is facing the biggest crisis in its 25-year history. The US has blocked the hiring of judges to the WTO's appeals body — which rules in trade disputes — to the point where just one remains. 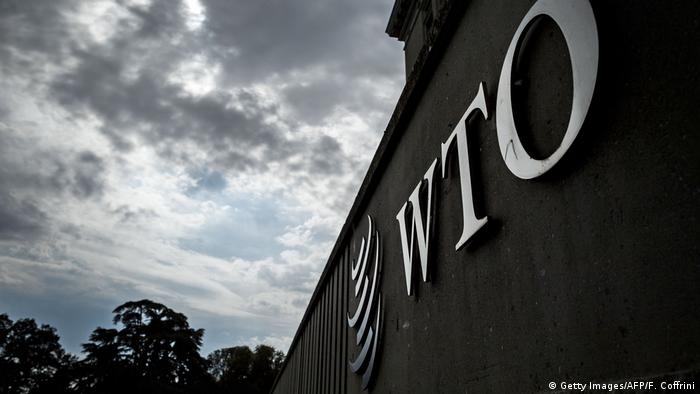 Why is the WTO in trouble?

The World Trade Organization, the international body that regulates the global trade in goods, services and intellectual property, is facing a major crisis in its dispute resolution process. The WTO's appeals body, which has been one of the key successes of the trade organization's 25-year-old history, will cease to operate as of midnight Tuesday due to a lack of judges.

The United States has, for two years, blocked appointments to the WTO's appellate branch, often dubbed the Supreme Court of trade. The impartial body plans for a team of seven judges and a minimum of three are required to rule on an appeal. On Tuesday, two of the three remaining judges ended their terms according to schedule, and with no replacements picked, the dispute resolution system will no longer have the quorum needed to hear cases.

What are Washington's main complaints?

US President Donald Trump has repeatedly attacked the WTO, accusing it of siding with China and other rivals in trade disputes. But Washington's beef with the Geneva-based body dates back more than a decade.

The US accuses the WTO's appeals body of overreaching its authority and that its judges have, in effect, created fresh trade laws. Washington insists the US Constitution does not permit a foreign court — in this case appellate judges — to supersede an American one.

The US also disputes the WTO's method of calculating whether a member is dumping cheap goods onto foreign markets and takes issue with the salaries of the appellate body's judges and the time they take to make their rulings.

Washington even threatened to block the WTO's 2020 budget over the dispute, but last week backed a provisional budget compromise which included substantial appellate body cuts.

What does the US want instead?

Although many policy experts say the US-China trade war has strengthened the case for having the WTO, they note that Washington now believes its national interests are best served by circumventing the trade body altogether and negotiating its own bilateral trade deals.

"The US is now more interested in utilizing power-play rather than operating according to the international rules-based system," economist Martin Braml from Munich's ifo Institute told DW.

How will the stoppage be felt?

The WTO's appeals body will no longer be the ultimate arbiter in international trade disputes.

Although a handful of outstanding cases may still be finished by the outgoing judges, it is likely the stoppage will lead to a backlog of cases and could tempt countries to stop abiding by WTO rules as the threat of penalties drops.

"It's hard to say how long the dispute will go on," Braml said, "but we could be without the panel [or a similar mechanism] for several months."

How will other WTO members proceed?

Washington has overruled a fresh plan by more than 100 member countries to begin the recruitment of new judges.

So, one diplomat has drawn up a plan for a temporary appeals process that would mirror the WTO court. Washington says it will not take part.

The plans have sparked concerns that the integrity of the WTO — and its rules-based system — will be further weakened by such a move.

Until a permanent solution is reached, it is likely that trade disputes will be resolved through arbitration. WTO members will still be able to file grievances, but nations unhappy with any rulings can simply delay enforcement by filing an appeal to a nonfunctioning court.

Is Trump's criticism of the WTO fair?

Since he took office, Trump has repeatedly accused the WTO of being set up for the benefit of everyone except the US.

But while the president claims Washington loses almost all trade lawsuits, his former Mexican counterpart Ernesto Zedillo Ponce de Leon recently wrote in an Op-Ed that the US is the most frequent user of the WTO's settlement body and has had a higher proportion of wins than other complainants.

Calls for major reforms of the WTO have grown louder in recent years, especially after China quickly grew to become the world's largest trading partner. Despite joining the trade body in 2001, Beijing has adopted aggressive export policies and repeatedly promised but failed to fully open its economy to foreign trade.

The WTO has even failed to force China, India and South Korea — and seven other G-20 countries — to accept that they are now advanced or developed countries. Still classed as developing nations, they benefit from favorable trade rules that other members say give them an unfair advantage.

The US has said it may increase tariffs after the EU lost its case at the WTO. The US claimed that loans made by the EU to Airbus for the development of the A380 and other aircraft represented an unfair advantage. (03.12.2019)

More and more Western firms are relying on the vast Chinese market for their sales and profits. But doing business in China means toeing the Communist Party's line and any criticism can cost them business. (11.10.2019)