World Press Freedom Index 2017 finds democracies are clamping down | World | Breaking news and perspectives from around the globe | DW | 26.04.2017

Reporters Without Borders (RSF) has warned that press freedom is under attack. In its latest World Press Freedom Index, the annual report criticizes Germany for laws on data retention and against whistleblowers.

Press freedom deteriorated in two thirds of the world's countries, according to the Press Freedom Report published on Wednesday by Reporters Without Borders (RSF.)

"The rate at which democracies are approaching the tipping point is alarming for all those who understand that, if media freedom is not secure, then none of the other freedoms can be guaranteed," RSF Secretary-general Christophe Deloire said.

A Vatican court has cleared two Italian journalists who published leaked Church information. Two out of three Vatican officials, however, were sentenced for their roles in the confidential leak. (07.07.2016)

An Italian journalist, who had been detained for two weeks in Turkey, has returned home. Turkish authorities had alleged that Gabriele Del Grande had entered an area near the Syrian border without permission. (24.04.2017)

A Mexican newspaper published near the border to the US closed its doors due to violence against journalists throughout Mexico. A reporter who had worked for the paper was shot dead last month. (03.04.2017)

German-Turkish journalist Deniz Yucel has been honored for his contributions to press freedom. The correspondent for the German newspaper "Die Welt" has been imprisoned in Turkey on "terror propaganda" charges. (05.04.2017)

RSF, the non-governmental organization (NGO) based in Paris, has consultant status at the United Nations. It investigated freedom of media and journalists in 180 countries and found democracies, as well as dictatorships, had increasingly clamped down on press freedom.

Researchers found that high-level politicians had used their power to quash media reports - a trend which was particularly frightening, according to Michael Rediske, Chief Executive of the group.

One prominent example was Finland's Prime Minister Juha Sipilä, who allegedly sent 20 e-mails to the editorial offices of the public broadcasting corporation YLE. He complained about stories which had accused him of conflicts of interest. As a result of his complaints, further reports were stalled by the editor in chief.

In New Zealand, legislation was introduced to dramatically expand the powers of intelligence services against the press.

In Canada state agencies monitored journalists who had investigated terrorism, in an effort to find the source of police leaks, the group found. The same trend happened in Great Britain, with laws protecting journalists from intelligence monitoring deliberately crippled .

In the US journalists were repeatedly put on trial for reporting on protests. The group accused US President Donald Trump of "systematic denunciations" of the media. 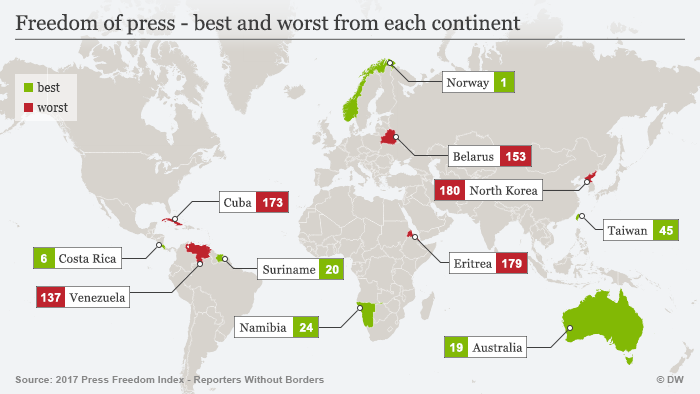 Changes on the press freedom index

Norway came out top of the index with the world's most free media. North Korea took over last place from Eritrea, which had occupied the position for a decade. "Even listening to a foreign radio broadcast can lead to a spell in a concentration camp," the report said of North Korea.

China, Syria; which has become the deadliest country for journalists, and Turkmenistan complete the bottom five.

Italy rose 25 places to 52nd place due to the acquittal of journalists tried in the Vatileaks II case, which investigated the Catholic Church.

New Zealand fell eight places, Canada fell four, while Great Britain, the US and Finland all fell two places. The biggest drop was in Nicaragua, which slipped 17 places.

Germany, which fell four positions in 2016 due to death threats against journalists, remained unchanged for 2017, along with Norway, Sweden, Denmark, Belgium, Austria and Estonia.

But the report found journalists in Germany were exposed to frequent attacks, or were often investigated by law enforcement agencies and secret services. Reporters Without Borders criticized Germany's data retention laws and new laws against whistleblowers.

Seven places ahead of Turkey, "Vladimir Putin's Russia remains firmly entrenched in the bottom fifth of the index," in 148th place, the report noted.

The Middle East and North Africa remained the most dangerous regions for journalists. In Burundi the secret service arrested and imprisoned several reporters. Similar attacks were also reported in Uganda. But Namibia and Botswana were relative bastions of press freedom in the continent. The situation also improved in Eritrea, with a handful of foreign journalists allowed to travel to the country under strict supervision.

The Philippines rose 11 places, with the number of journalists killed falling sharply last year. In Colombia the peace agreement with the FARC rebels had a positive effect after 52 years of armed conflict. For the first time in seven years no reporters died due to their work.