Achieving zero hunger by 2030 is still a distant goal for most African countries. Yet Senegal is making strides towards reducing malnutrition and improving livelihoods. 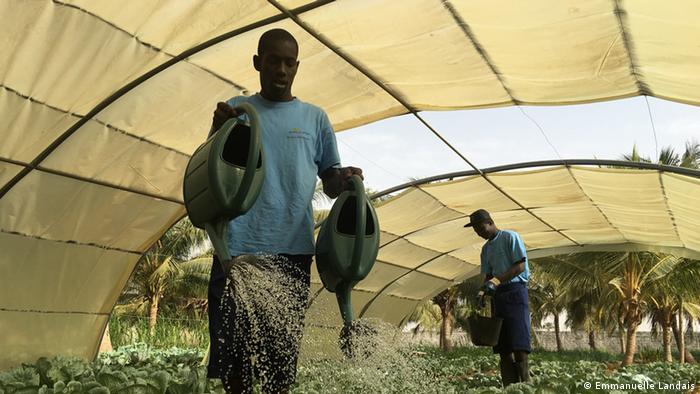 In the southern region of Tambacounda, 500 kilometers south west of the capital Dakar, Senegal's cereal farmers are using mobile apps to plan the sowing and harvesting of crops. The apps, developed by the government and international partners, help forecast the weather, keep on top of cereal prices and provide information on nutrition or animal health — all with the aim of reducing poverty and malnutrition.

Worldwide, the goal of reaching zero hunger by 2030, has been a difficult target to achieve. On October 11, the Germany aid organization Welthungerhilfe released it's2018 Global Hunger Index. "Without political solutions the battle [against hunger] will not be won," stated Welthungerhilfe President Bärbel Dieckmann. According to her, war and climate change are the main culprits and African countries have been particularly hard hit.

Senegal, however, has been recognized as a leader in the fight against malnutrition in Africa. Between 2000 and 2016 Senegal reduced undernutrition by 56 percent according to a recent report by the Malabo Montpellier Panel — the international group of agricultural experts advises the African Union Commission and analyses the policy decisions and institutional interventions that have contributed to success in reducing undernutrition. Senegal is one of seven counties on the African continent that's been successful in this domain.

While the health sector remains the lead sector tackling malnutrition in Senegal, there is evidence that making agriculture more nutrition-sensitive and helping farmers increase their yields can improve nutrition outcomes as well.

Beating the effects of climate change

Moussa Sano, a cereal farmer living in Tambacounda, has already put the app to good use. The Weather and Crop Calendar app was created by the UN's Food and Agriculture Organization (FAO). "Climate change can lead to problems, like reduced yields. Climate change and the lack of rain has persisted but the app has helped improve the situation," Sano told DW. The rainy season in Senegal lasts about 3 months — from August to November. Though the rain came late in the season, thankfully, it's been plentiful this year.

"If we want to plant groundnuts, but we see that a lack of rain is predicted or the rainy season is delayed, we can opt for a different variety that is less of a risk," Sano explains. "There are also different grains that do well with less rain and we know in 60 to 70 days we'll have a harvest."

"Maize is a difficult crop to grow when it comes to the weather, because if it doesn't rain, then you have no harvest," Sano explains.

The solution of using apps may almost sound too simple, but by 2025 Africa is expected to have 535 million unique mobile-phone subscribers — nearly half of its population. Having access to accurate information like the weather in real-time can help reduce failed crops and improve food security.

Sada Ly is a regional director of rural development in Tambacounda. He says cultivated land has increased in the region. The mobile industry has attracted people back to the fields, knowing they have the support of experts at the touch of a button.

"It's a region with high potential and rich soils," Ly says about Tambacounda. "Over the last few years we've seen that planted areas have increased. Regionally we're the third biggest producer of peanuts in Senegal, we're the fourth biggest maize producer and the first in sorghum."

Progress has been made during the last two decades in reducing extreme hunger in Africa.

In 2002, Senegal launched a nutrition reinforcement program to improve the nutrition status and healthy development of children under the age of five living in poor urban or rural areas of Senegal.

One in five people are still chronically undernourished in Africa, according to the Malabo Montpellier Panel report.

For Sada Ly, helping farmers learn what grains and cereals are more nutritional and developing the sector even further is a win-win situation for rural farmers' pockets and their health.

"I believe agriculture needs to become a profession so that the farmer feels that through this profession he has an activity 12 months of the year," Ly emphasizes.

Vulnerable agro pastoral communities in Tambacounda have also increased cereal banking as a coping mechanism to their food security threats. The banks are often sponsored by the World Food Program, or international organizations in collaboration with the government.

Ousseynou Sow from the rural development office in Tambacounda says previously farmers would sell their crops at meager prices after harvest only to buy them back at higher prices in times of need. "The bank is in the interest of the farmers," explains Sow. "When you're in difficulty and you do not have enough grains at home, you can come to the bank to borrow some, and at the harvest you will repay it."

Across Africa, the proportion of people suffering from hunger declined from 28 percent to 20 percent between 1990 and 2015, although the total number continues to increase due to rapid population growth.