A World Bank forest rescue program has been given a multi-million "kickstart" by Germany. Norway has done a deal with Gabon that it sustains its tropical forests to absorb carbon dioxide and help avert climate warming. 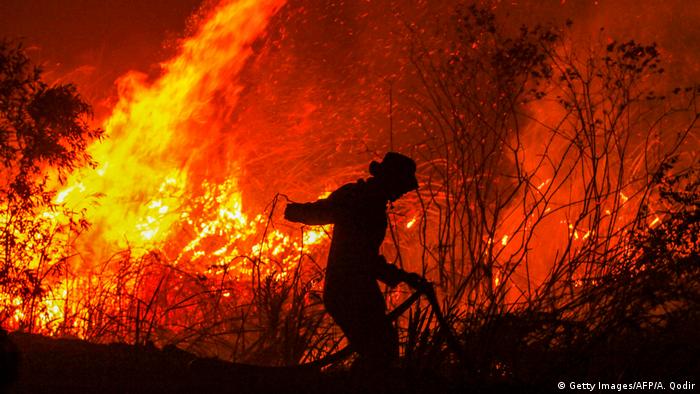 The World Bank said Earth's remaining forests were under "increasing pressure" while providing habitat for 78% of the world's poor, with one-third of total land areas already degraded "at an estimated annual cost of US$300 billion."

Müller said 11% of the world's carbon dioxide emissions (CO2) could be traced to deforestation.

"We must stop this immediately," said Müller, adding "the green lungs of our planet are burning."

Every four seconds a football-sized area of the Amazon had been logged and turned mostly into soy and palm-oil plantations, he said.

Aside from the €200 million, Germany also pledged a further €30 million for the Central African Forest Initiative (CAFI) and €20 million to support indigenous peoples.

France, too, just ahead of the UN Climate Summit in New York, pledged $100 million for tropical forest protection, including the Amazon. Norway on Sunday signed a contract under the CAFI to pay the central African nation of Gabon €10 for every ton of carbon absorbed and therefore not emitted — up to a maximum of 150 million over ten years.

The agreement will reward past performance — verified results since 2016 compared to the previous phase of 2005 to 2014 — as well as future results to be paid annually until 2025.

Gabon's forest minister Lee White said: "they [Norway] will pay us because we have not deforested, and because we've managed logging responsibly, and reduced emissions linked to logging."

"Gabon is 88% covered with forests," said Norwegian Climate and Environment Minister Ola Elvestuen, describing the deal as a "major breakthrough" for the African continent.

"If we keep destroying the Amazon forest, we will soon reach the tipping point where the forest loses its capacity to recycle humidity and precipitation, said Lykke Andersen, a Bolivian sustainability expert.

Indonesia, which has also spent months battling fires, said Monday it was studying a plan to mete out harsh penalties to firms that ignited forest and peatlands.

Panama has lost over half of its mangroves to development and the tanning industry. But now a group of school children have taken up the cause of defending these important forests. (28.02.2017)

'Gabon: first in Africa to receive payments for preserved rainforests'