In a game billed as the biggest in the history of women's football, the US overcame France in a thrilling contest. Fittingly, in a week when she has grabbed the headlines, Megan Rapinoe proved the match winner. 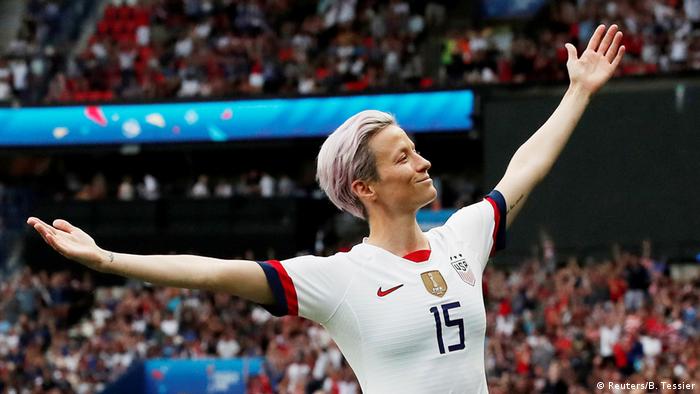 Megan Rapinoe keeps delivering. At the start of the week, it was words. By the end, it was goals. Rapinoe is undoubtedly a woman for the biggest of occasions.

Rapinoe ran away in celebration after her early free kick flew in through a crowd. She stood with one arm raised up, the other raised out (see picture above). It was the celebration of someone who completely understood the irony of the situation. This woman, this hero of resistance, was the match winner just days after she had publicly and colorfully said she wouldn't go to the White House. Even Rapinoe had to smile. 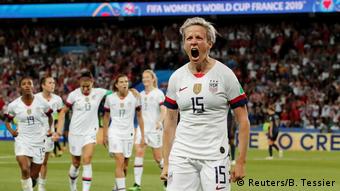 Rapinoe's celebration for the second was louder than her first

The 33-year-old has never shirked away from her values, and has made sure the world is actuely aware of what those values are. She has kneeled to protest social inequality in the US, constantly given her voice to the LGBTQ community, and has been a part of the lawsuit against the US soccer federation for equal pay. Everything Rapinoe says or does she does so with such conviction - whether it's scoring goals in World Cups or supporting people who need to be heard.

In an era where the silence of many footballers is deafening, Rapinoe is loud and proud. For many, she is that rarest of things: an athlete truly worthy of the word hero.

At a time when women's football is reaching unprecendented levels of attention and recognition, Rapinoe has not just used the platform football has given her to remind the world of her sporting talent but also to give voice to the issues important to her. She cares, not just about things close to her but also about many issues that she never has experienced. Empathetic and expressive, there's a case to be made that Rapinoe's football is an extension of who she is. There is no separation for the 33-year-old. From perfect placement to pink hair, she has always stayed true to herself. 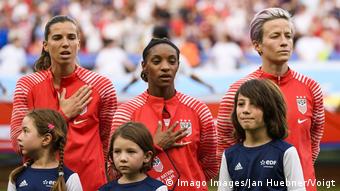 Rapinoe chooses not to sing the national anthem

At 15, she played her first youth international for the US. She scored her first World Cup goal in 2011. She has overcome three ACL tears. Now, aged 33, she was scoring a brace to guide the US into a World Cup semifinal. In the first half, she was everywhere. In the second, with France finally bursting out of their fear, her lack of defensive cover became a growing concern. The game grew fast and furious, another great piece of evidence that the women's game is relishing the attention it is finally getting. Then, as she often does, Rapinoe popped up at the end of an excellent team move that exposed an out-of-place France defense to sweep home a second.

There were other heroes on the night, especially after Wendie Renard rose to head in a goal that reinvigorated a home crowd short of hope. Crystal Dunn was outstanding and Alyssa Naeher stayed calm when the US had to weather the storm.

This was Rapinoe's game though. This was her moment to show the world what she has been doing for so long. The midfielder has said she wants to leave the game in a better state. Nights like this show just how much she is doing for the sport and for the US' chances of winning another World Cup, but they also send another reminder: just how much of a privilege it is to see and hear Megan Rapinoe in all she does.