A solitary strike by Jackie Groenen sent the Netherlands into the World Cup final at the expense of Sweden after an attritional affair in Lyon. Holders and tournament favorites United States await in Sunday's final. 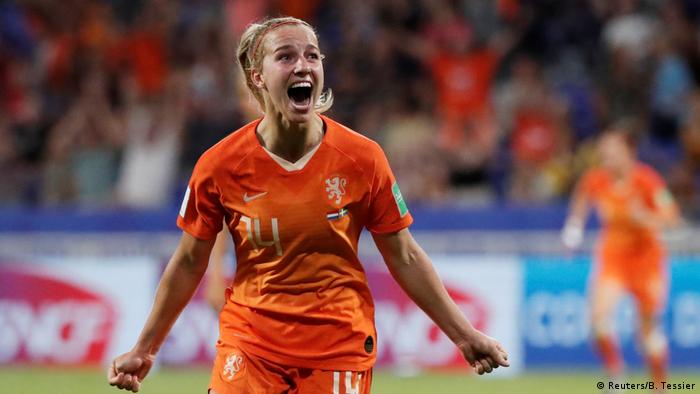 Jackie Groenen's fine extra-time strike settled a forgettable semifinal against Sweden and set up a World Cup final against the United States.

Sweden were edged out of a game that was painfully short on quality or entertainment for long periods, despite creating more chances than the Dutch throughout the evening.

Both sides hit the woodwork in the second half after fingertip saves from both goalkeepers, with Sweden's Nilla Fischer and the Netherlands' Vivianne Miedema denied by top-class stops.

The game drifted into extra time and against a heavy-legged Swedish defense, former FFC Frankfurt midfielder Groenen let fly with a fine low shot from distance to set up a clash between the reigning European champions and the world champions in Lyon on Sunday.

FT Netherlands 1-0 Sweden - It's all over! The Netherlands will face the United States in Sunday's World Cup final. It was a hard watch but the Netherlands are over the line. Heartbreak for Sweden, but they had the chances to win this.

118' Sweden hoisting balls into the box now. The Dutch have their backs against the wall - just two minutes until they're into the final.

116' Jakobssen wins a corner for Sweden after a tremendous block by Van Lunteren.

113' The Swedes being forced to play a more risky, urgent strategy to get the goal they need. We're heading towards a grandstand finish. Hopefully.

110' Sweden trying desperately to find an equalizer but the Dutch a running down the clock.

HT of ET Netherlands 1-0 Sweden - The Dutch are 15 minutes from the final.

102' The goal has forced Sweden out. They probably deserve a goal, but have lacked that cutting edge tonight.

99' GOAL! Netherlands 1-0 Sweden - Jackie Groenen makes the breakthrough! The former Frankfurt player drives forward unchallenged and just lets fly with a low drive that nestles into the bottom corner. It's taken 99 minutes, but we have a goal!

95' Everything was positive about the build-up from Van de Sanden, but her final ball evades everyone.

90'2 Netherlands chance! Van de Sanden gets her head up and bangs it at goal and Lindahl bats it away. Van de Sanden has been very direct since coming on, which is what is needed.

90'+1 Five additional minutes before we head to extra time.

90' Van de Donk picked out by Van de Sanden, but Van de Donk lets the ball roll over her foot. Otherwise she was in.

88' If Sweden don't win this, they'll have a lot of missed chances to reflect upon.

87' Sweden win a free-kick on the right side of the penalty box and Eriksson hammers it at goal, but it rises narrowly over the top.

85' Another promising attack let down by a poor final ball. This time Groenen overhits her pass and the chance is gone.

82' Sweden keeping up the pressure with back-to-back corners.

79' Double Sweden change: Janogy and Zigiotti on, Hurtig and Rubensson off.

76' Van de Sanden has lifted the crowd, who were drifting towards Mexican Wave territory. She drives at the Sweden defense, wins a corner and then urges the fans to get behind their team.

73' Aslani gets into a great position but rather than cutting her cross back to a teammate, she plays a nothing cross straight into Van Veenendaal's arms.

68' No women's World Cup semifinal has ever gone to extra time...

65' Both keepers are free agents. They may not be after tonight.

64' Off the bar! This time the Dutch hit the woodwork, and again it's a brilliant save to keep it out. Miedema's header from a corner is creeping under the bar, but Lindahl, who has had barely anything to do, pulls off a superb fingertip save on to the bar. Fischer completes the job by blocking the rebound.

62' It's fair to say finalists US will not be concerned in the slightest watching this.

60' An hour gone and still no goals. One goal will win this. Unfortunately neither team seem capable of getting it.

58' The Netherlands looking uncharacteristically shaky at the back. Sweden asking questions of them but, thus far, unable to make the decisive breakthrough.

55' Off the post! Sweden go so close through Fischer, who cracks a low shot towards the bottom corner and it brushes the fingertips of Van Veenendaal on its way to hitting the inside of the post.

52' A good move by the Netherlands involving Van de Donk, Miedema and Roord, but a poor final ball by Miedema sees the move break down.

49' Bloodworth is caught in possession by Blackstenius, who drives at the Netherlands goal - but Bloodworth atones for her error to make a crucial block. Hearts in mouths for the Dutch.

47' Big change by the Dutch at the break. Lieke Martens is off, Jill Roord is on. Martens was some way short of her best, it must be said. Although the reason given for the change is a toe injury.

46' SECOND HALF. We're back underway.

45' HT Netherlands 0-0 Sweden - It's all square at the break. Both sides seem nervous and we've had a turgid game as a result. Lets hope for better after the break because, well, it can't get much worse.

44' Miedema drives into the box from the right. She can't get a shot away but Beerensteyn can. It's shut down though before Miedema gets another bite at it before being crowded out.

41' Spitse lets fly with a shot from long range but it doesn’t bother the keeper. It's been all too comfortable for Sweden when the Dutch go forward.

39' It's been an attritional half but Sweden can reflect on having had the better of the chances. The Netherlands just haven't troubled Lindahl to the same extent.

37' Sweden chance! Their best of the game. A corner comes into the box, the Dutch fail to get it away and Hurtig pokes it at goal from close range but Van Veenendaal makes a good reaction save from point blank range. 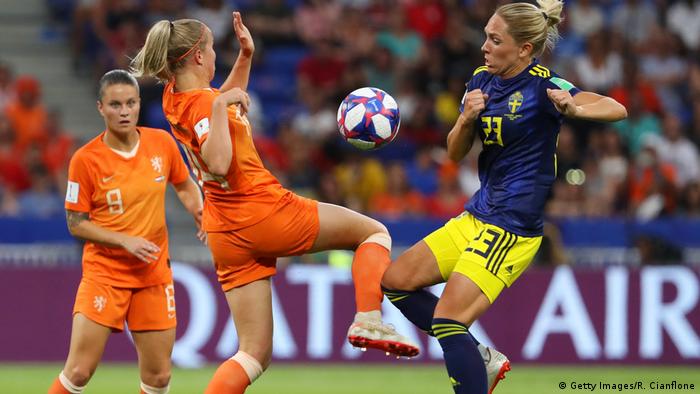 Jackie Groenen and Elin Rubensson battle for the ball.

33' A clash of heads has held the game up here.

31' This game isn't very good. Quality has not been great and both sides seem anxious. Not very watchable at the moment.

26' Both sides struggling to produce moments of quality in the final third.

24' Bloodworth makes an absolutely crucial block to stop a through ball getting past.

21' Jakobsson almost connects with a low cross from the right but the Dutch defend it well. Very little to choose from the sides, although Sweden are shading it so far.

19' Close! Ericsson whips in a devilish free-kick to the far post that just evades the waiting players in the box. Van Veenendaal just managed to glance the ball away, enough to take it away from the waiting Swedes.

17' It's an open game though, and one that is in the balance. The opening goal will be crucial tonight.

15' Sweden are looking the more dangerous of the sides at the moment. Breaking forward at speed and with purpose.

13' Van Veenendaal receiving treatment after that, but it seems as though she will be ok.

12' Chance Sweden! Blackstenius is sent clean through despite a hint of offside. Her shot is saved well by Van Veenendaal, whose hand is caught by Jakobsson as she tried to reach the rebound.

10' Seger makes a crucial bloke to deny Miedema, who got into a great position and was about to pull the trigger.

8' Sweden starting to flex their muscles and they look dangerous going forward. Picking holes in the Dutch defense already.

6' A swift breakway by Sweden looks promising, but Jakobsson runs down a blind alley and the Dutch get it clear. A glimpse of what Sweden offer on the break though.

5' As expected, it's Netherlands seeing more of the ball and Sweden sitting back.

3' The Netherlands have started brightly. A quick free-kick by Van de Donk finds Miedema, whose snapshot from outside the box is dragged a couple of meters wide.

The Netherlands make one change, with Shanice van de Sanden dropping to the bench with sub Lineth Beerensteyn finally getting a start that I think she deserves.

Sweden make the expected change with Hurtig coming in for the suspended Rolfö, but Björn getting the nod over Rubensson is a little surprising.

— Another Dutch game, another sea of orange surges through France.

The Netherlands will enter Wednesday evening brimming with confidence after their 2-0 win over Italy in the quarterfinals. Sweden, though, will be similarly confident, having knocked off Germany 2-1 in their quarterfinals. The results also meant that the two countries will join Great Britain at next year's Summer Olympic Games in Tokyo, with Britain having qualified via England's run at this World Cup.

This is the first time that the Netherlands have made it to the semifinals at a Women's World Cup, while it will be Sweden's four appearance at this stage. The winner is to face the defending champions, the United States, in Sunday's final. Like both semifinals, the final is to be played in Lyon.

France is hosting 24 teams for the Women's World Cup. Though the athletes play professionally in 34 countries, some leagues are better represented than others. Where are conditions for women's football best — and why? (27.06.2019)