Women's football in Germany: Glass half empty or half full?

Germany's female footballers still seek recognition and visibility despite three decades of smashing records and exceeding expectations. As some joined the Hall of Fame, veterans reflected on the sport's past and future. 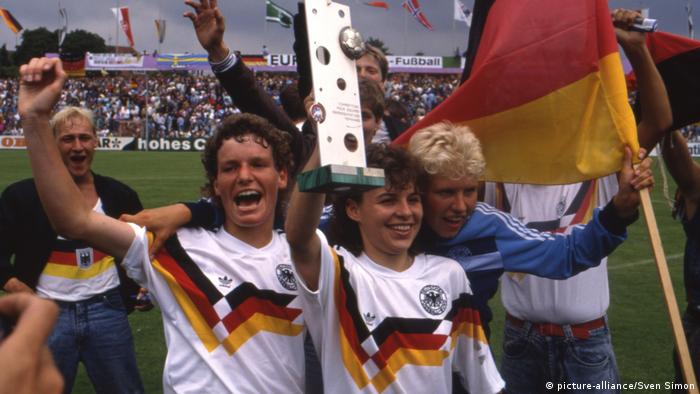 Germany's Football Association (DFB) honored twelve of the country's best former female football players at the unveiling of the women's Hall of Fame this month.

The momentous occasion came nearly 50 years after the DFB lifted its ban on women's football, which allowed for a national team to be formally created in 1982.

Since then, Germany's female footballers have enjoyed unparalleled success in Europe, winning eight out of the past 12 European championships. Furthermore, with two World Cups under their belt, they are second to the US in global titles.

It was hard to reconcile such proven football success with the smallness of the low-key and thinly attended Hall of Fame commemoration.

The event served as a microcosm of the current state of women's football in Germany; the sport's giants humbly accepted well-deserved accolades while highlighting the need for "increased recognition" of female footballers and the persistent cloud of a massive wage gap, lack of investment and general disparity with the men's game still hangs over the sport.

But the Hall of Fame inductees also highlighted the positives, reminisced about their careers and rightfully focused on how much things have changed for the better.

Three generations of female footballers were present, from former Germany coach Silvia Neid, who played in the very first national team in 1982, to Nia Künzer, who retired in 2006. Also in attendance were members of the 1955 Fortuna Dortmund side, one of the many unofficial teams to defy the DFB's postwar ban.

The former Fortuna players told DW that, despite rejection from society and football's institutions, they counted on the support of family, friends and their community, to pursue their passion for the sport.

The older guard told a story of women who stubbornly stuck to football thanks to individual persistence and with help from their community.

But for players who followed, this would not be enough and moving forward would require structural changes. 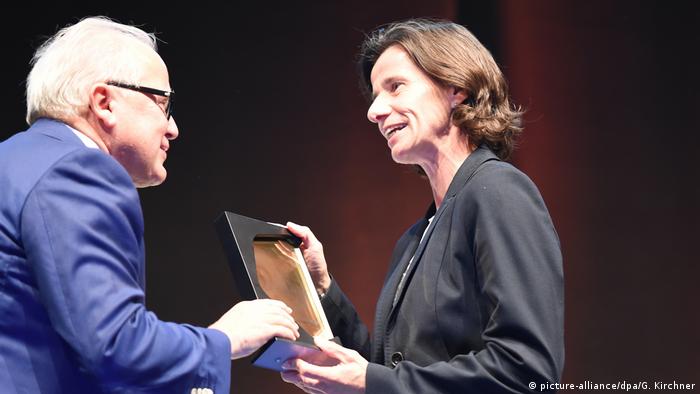 Former goalkeeper and Hall of Famer Silke Rottenberg told DW that she too had a support system, but that the biggest obstacle came at the age of 12, when she could no longer play in boys clubs and discovered the severe scarcity of female youth teams in her area in the 1980s.

Bettina Wiegman, a midfielder of Rottenberg's generation, added that the fact that this is no longer an issue for girls today was a notable achievement.

US and Germany 'cannot be compared'

The US Women's National Team put on a show of football prowess in the 2019 World Cup and showcased just how popular the sport can be. When asked if such enthusiasm could ever be seen in Germany, the hall of famers were not so sure.

"In Germany, I think men's football will always be at the top," Wiegman said. She stressed the importance of not comparing the women's team to the men's, but to other types of sports instead.

"The US is ahead of us on this because it is the number one sport for women there," Wiegman acknowledged. But she was confident that Germany is set to continue growing the game. 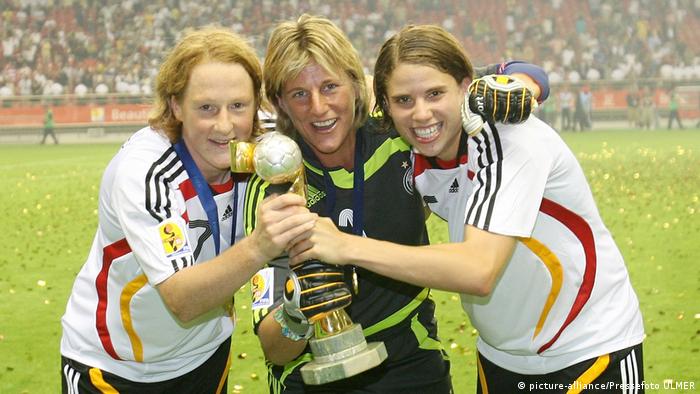 "We are on a different path... and what we have in Germany cannot be compared with the US," Rottenberg said, adding that the US college playing system sets them apart.

The Americans have also been at the forefront of the wage gap debate, using their successes as leverage in an ongoing lawsuit against against their federation.

Read more: Opinion: Led by Megan Rapinoe, this World Cup should be a seminal moment

Ballon D'Or recipient Ada Hegerberg, who refused to play for her native Norway until the gap is closed and the entire Danish team, who went on strike in 2017, have also taken a stand.

But in Germany, the fight over the wage gap has been much more muted. "We still don't dream of making the same money as the men because that's totally unrealistic," Rottenberg said bluntly.

In an interview with German broadcaster ZDF during the Hall of Fame ceremony, current Germany goalkeeper Almuth Schult felt the same way. "We should not go in the direction of equal pay, as we are very far away from that," Schult said, adding that "it has to do with supply and demand, and we are very behind on that."

For Schult, the focus should be on having the "opportunity to present women's football" to domestic fans. But the women's league is currently being eclipsed by those in Spain, France and the UK, where major clubs such as Barcelona, Manchester United and Paris Saint Germain have invested in elevating and better marketing their female teams.

In Germany, major clubs are still reluctant to do the same. Awkwardly, the Hall of Famers were honored in Dortmund, whose legendary football team Borussia Dortmund and its rival Schalke 04 still refuse to establish female clubs.

Read more: Why don't Borussia Dortmund have a women's team?

"I have said before that there is only one football, where there are amateurs, professionals, women and girls," DFB president Fritz Keller told reporters at the Hall of Fame, emphasizing his belief in investing in women's football as the way forward.

"There are these lower leagues that say they'd rather pay male players more than establish a female team, that cannot be," Keller added.

But Dortmund president Reinhard Rauball and Schalke's head Peter Peters, who attended the Hall of Fame event, defended their stance to ZDF, saying it was up to individual clubs whether or not they invested in women's football and that at the moment, their organizations had already allocated a lot of resources to other sports such as handball.

In the absence of widespread fan demand and league club investment, Germany's female footballers can really only look to DFB. Keller has said he is committed, but the real test will be whether he is willing to confront the league bosses on behalf of female players and in turn, push the sport forward.

FIFA say the next Women's World Cup will feature an additional six teams. After the success of this year's tournament, FIFA President Gianni Infantino sees now as the time to 'foster the growth of women's football'. (31.07.2019)

Her coach says she's "fantastic," and Lena Oberdorf has made her mark at the World Cup while taking time out from school. With Germany through to round of 16, she could enhance her reputation against South Africa. (14.06.2019)

More than a month after the crowd chanted "equal pay" following their World Cup win, the US women's soccer team remain in conflict with their own federation. Talks have broken down and harsh words have been exchanged. (15.08.2019)