Her coach says she's "fantastic," and Lena Oberdorf has made her mark at the World Cup while taking time out from school. With Germany through to round of 16, she could enhance her reputation against South Africa. 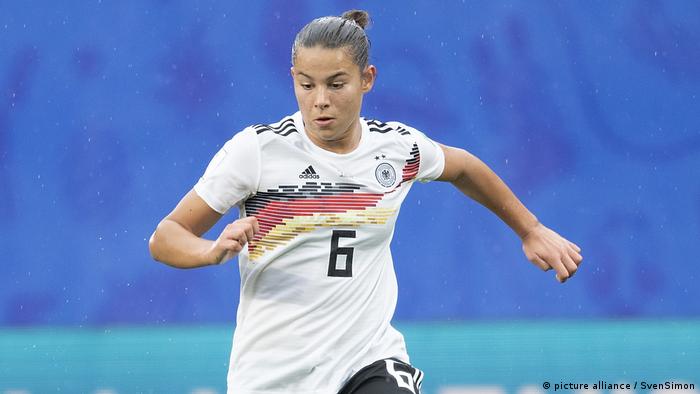 She was just 6 years old when Germany won the last of their three World Cups, but, as her rise continues, expectations and hopes are growing that Lena Oberdorf will be a key part of the next squad to lift the trophy — whether that comes next month or further down the road.

A pair of 1-0 wins, secured with contrasting performance levels, have helped Germany through to the last 16 of the tournament, regardless of the result of their final group game, on Monday against South Africa, who are all but eliminated.

But while an injury to Dzsenifer Marozsan has cast something of a shadow over the 2011 champions, Oberdorf's strong, composed, versatile and efficient displays – as a halftime substitute against China and in two different positions against Spain – have offered some compensation.

"I don’t really know how I do it," the SGS Essen star said of her comfort in a tournament that comes at the end of her first Bundesliga campaign.

"I still can’t grasp it at all," she added in an interview published on the FIFA tournament's official website.  "You get a bit nervous before each game, of course, but that all goes away once the match starts – then I can concentrate on my play." 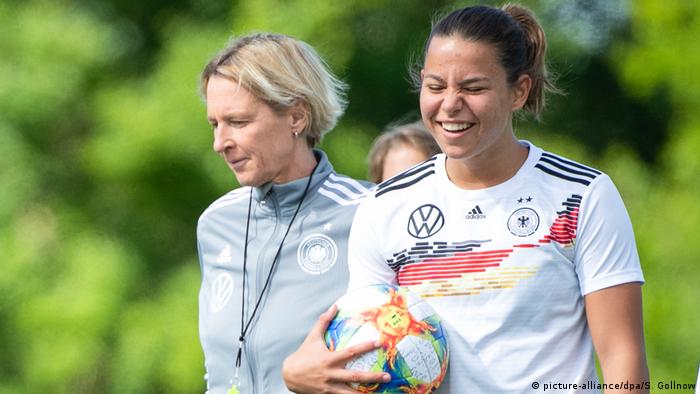 Martina Voss-Tecklenburg (left) has been impressed by Lena Oberdorf

Germany coach Martina Voss-Tecklenburg described her young charge as "fantastic" after the China game, where Obersdorf impressed in the middle of the park alongside Marozsan.

"With Lena, we want to introduce a physical presence," Voss-Tecklenburg explained after the match. "If we can do that with our youngest player, then that says a lot about her."

Oberdorf was part of the Germany side who won the under-17 Euros in 2017, a year after a side featuring Giulia Gwinn ,19 and Klara Bühl,18 won the same competition. The trio of teenagers head a new generation gaining vital experience in France, but for a nation as rich in footballing pedigree as Germany, there's no time like the present.

If they are to reach the latter stages Germany will have to find a sharper cutting edge, with or without the guile of Marozsan, who will miss the South Africa game as she continues her recovery from a broken toe. With a ratio of better than a goal every two games in her short Bundesliga career, Oberdorf may feel confident of becoming Germany's youngest-ever finals goalscorer as well as its youngest-ever World Cup player.

Defender Marina Hegering, who said on Friday that Germany were "not yet entirely satisfied" with their performances so far, thinks her teammate has the potential to kick on still further.

"Lena is already a top performer for us at Essen at the age of 17, and that’s no ordinary achievement," Hegering said. "But she already has personality on the pitch; she has charisma and knows how to give a good account of herself. You’ll be hearing a lot more about her."

Voss-Tecklenburg – and Germany's fans – will certainly hope so.

Two of Germany's youngest players proved pivotal in their opening 2019 World Cup game against China. They helped Germany get the win, but many questions still remain about how far this Germany team can go. (08.06.2019)

Germany moved one step closer to the knockout stages after making it two wins out of two with another gritty performance. Spain provided tough opposition in Valenciennes, but like China failed to take their chances. (12.06.2019)