Bundestag President Wolfgang Schäuble has said eastern Germans should show more self-confidence. In a newspaper article, he wrote that the East should be proud of its ability to deal with huge social upheavals. 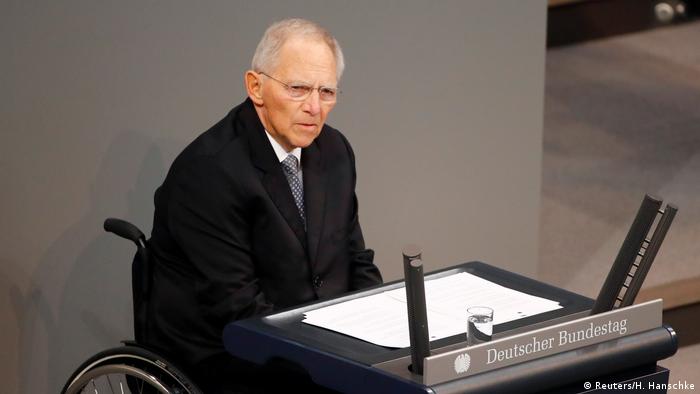 German political grandee Wolfgang Schäuble on Saturday said the country should recognize the huge social upheaval the eastern states have experienced since reunification. But he also warned eastern Germans that they should show more self-confidence and less cynicism.

In an article for the Berlin-based Die Tageszeitung (TAZ), the Bundestag president noted, "Some maintain their own victim status, instead of confidently pointing out their valuable experience in adapting to massive social upheaval, compared to the West."

He said German unity would be boosted if eastern Germany's handling of the "imposition of globalization and digitalization" was seen more positively.

Schäuble noted that "a remarkable finding 30 years after reunification" was that many people in eastern Germany still identify with their former communist country while those in what was West Germany primarily think of themselves as Germans.

The politician's comments follow a report last month by the government's commissioner for eastern German affairs, who found that 57% of citizens in eastern Germany feel like second-class citizens.

Christian Hirte's research also revealed that just 38% of those asked in the east see reunification as a success, including only 20% of people under 40.

In his article for TAZ, Schäuble acknowledged that uneven living conditions, a lack of recognition, a brain drain and even family-related insults have helped to form an identity "that cemented the division" that exists between both halves of Germany "rather than helping to overcome it."

Three decades after reunification, studies show that Germany's eastern states continue to lag behind the West.

Separate research published last month by the Institute of Economic and Social Research (WSI) found a slight decline in income inequality in eastern Germany but noted that a large gap between the two regions persists.

Also in November, the government agreed to almost entirely abolish the so-called solidarity tax introduced in 1991 after German reunification. The revenues raised were used to invest in projects and infrastructure in the East.

The TAZ article, by the former finance minister, also looked beyond Germany's borders and warned against playing off national identities against European unification.

"We can work to create a European identity," he wrote, before proposing a "confessional identity" that does justice to the different national experiences, traditions and cultural characteristics of the past.

He added that this identity "must focus primarily on the responsibility for a common future."