More than one third of Germany's 21,500 wind turbines are located in the nation's east. This concentration of generating capacity regularly overloads the region's electricity grid, threatening blackouts. 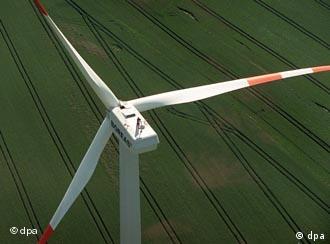 Eastern Germany is home to some 8,000 wind turbines

German Economics Minister Rainer Brüderle recently warned that Germany faces frequent power blackouts because too much 'green electricity' is being pumped onto the grid.

While this is a problem all four of Germany's major electricity network operators have to deal with one time or another, Belgian-Australian company 50Hertz Transmission is particularly hard hit. It took over the monitoring and protection of the eastern German energy grid - which is home to more than 8,000 wind turbines - from Swedish company Vattenfall last year, and faces the threat of power outages much more often than its counterparts. 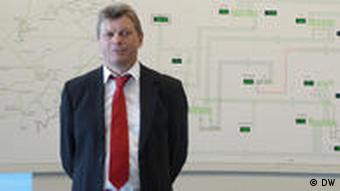 Hans-Peter Erbring is head systems control and security for 50Hertz

The situation tends to be particularly critical on public holidays, 50Hertz systems control and security chief Hans-Peter Erbring told Deutsche Welle. That's when residents and companies based in eastern Germany use significantly less electricity than usual - but the wind, of course, often blows regardless.

In extreme cases, wind turbines and conventional power plants in eastern Germany produce three to four times the total amount of electricity actually being used. This surplus places a great strain on the eastern German "supergrid" - a 10,000 kilometer 'electrical highway' that transmits energy from offshore wind farms and large power plants for distribution among high-voltage networks.

Too much energy, not enough demand

50Hertz engineers monitor the supergrid for Germany's five eastern federal states and the city of Hamburg from a yellow building on the outskirts of Berlin. At the company's control center, a team of highly specialized engineers watch a large screen that displays exactly how much electricity various power plants are currently feeding into the grid and coordinate changes among 1,500 facilities to prevent the system from collapsing.

In 2006, when wind farms were few and far between, coal, gas and nuclear power plants produced just the amount of energy needed in eastern Germany at the time, but also created large amounts of nuclear waste and carbon dioxide emissions. The system was relatively stable. One average, engineers took action to stabilize the eastern German grid roughly 80 times a year.

Today, as the amount of electricity generated by the region's 8,000 wind turbines rises and falls by the hour, engineers have to intervene every second day to maintain network stability.

The Global Wind Energy Council (GWEC) reports that in 2010, about 40 percent of Germany's wind power production – or 6 percent of global output - came from eastern Germany. That figure is expected to rise dramatically as "Baltic 1," a gigantic new offshore wind park in the Baltic Sea, enters operation later this month. Another 13 projects are planned for the next few years.

With no technical means of storing this surplus energy, 50Hertz safeguards the eastern German grid by managing production levels and exporting electricity to other regions.

"We will then have to transport 80 percent more from our control area than we did in 2009," he said. While 50Hertz would like to channel a whopping 11.7 gigawatts of electricity to southern Germany and the industrial Rhineland area, it lacks infrastructure links required to do so. 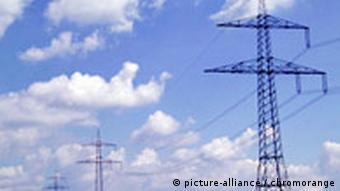 In theory, the control center at 50Hertz can order individual wind farms taken off the grid during strong wind phases. But in reality, that is a rare exception as 50Hertz is bound by German energy laws that stipulate that "green" power must always have priority on the grid.

As a result, coal, gas and nuclear facilities should be shut down before wind turbines are taken offline, but operators say they avoid this because they rely on traditional power plants to produce a consistent level of base power at all times.

A 2005 study conducted by the German Energy Agency found that 850 kilometers of new "electricity highways" were needed to improve the eastern supergrid - 90 kilometers of which were eventually installed. Five years later, in its most recent study in 2010, the agency said demand was expected to increase fourfold over the next 10 years.

One of the projects pending is the so-called South-Western Cross-Border Transmission Capacity, needed to prevent the collapse of the eastern supergrid. Without the link between the Thuringian Forest and Upper Franconia - a project that faces massive opposition from citizens' groups - no electricity can flow from the east to the south.

50Hertz security expert Hans-Peter Erbring warned it's a tense situation: "Eastern Germany will continue to have major grid stability problems if the links aren't in place within the next few years."

As Japan struggles to contain its nuclear crisis, Germany’s renewable energy sector and green electricity providers are getting a boost from consumers intent on moving away from atomic power. (16.03.2011)