Will trade teaching for housing | Germany| News and in-depth reporting from Berlin and beyond | DW | 02.11.2016

Will trade teaching for housing

In the German city of Duisburg, students and volunteer service workers help children with their schoolwork in exchange for free housing. 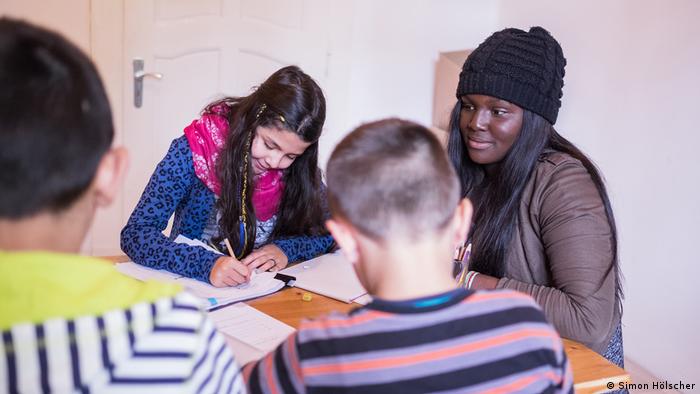 Christine Bleks, founder of the project "Tausche Bildung für Wohnen" ("Will trade teaching for housing"), had a simple idea: She wanted to build a team that helps children in Duisburg's Marxloh district who come from countries like Albania, Romania, Bulgaria, Turkey or Syria. Bleks also gets help from students or people from volunteer services. The "teaching sponsors" work with the children, help them with their homework, cook with them and are simply someone to turn to and help with other problems. In return, they are allowed to live free of charge in shared apartments provided by the project.

Not everyone is suitable for the job in this rough district. "We need workers who can improvise and organize and in exchange, they have a field of work with a great degree of flexibility," said Christine Bleks. The "teaching sponsors" are supposed to help improve the district just by being there and becoming an ambassador for Marxloh, promoting a better image of the district outside and perhaps, in the long term, reversing the downward spiral in social and urban development.

Homework in the rectory

Marxloh is seen as a troubled neighborhood because of high unemployment, street crime and dilapidated homes. Many have given up on this area. To add to the existing problems, masses of refugees arrived and many of them were put in housing in the already-difficult district in the north of the city. Now, 36-year-old Bleks and her team are also dealing with children and young people who have fled violence and terror. 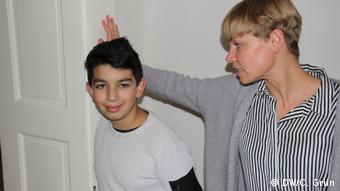 The whole project is based at an apartment with a garden in Marxloh, all provided by the Roman Catholic Diocese of Essen. The program focuses on homework and, for refugees, language acquisition. Around 50 children between the ages of six and 12 regularly meet in the old rectory. Many of them have difficult circumstances to deal with. "We have children in the second grade whose greatest wish is that they are granted the right to stay. Others have experienced awful things during their flight from Syria," explained Bleks.

A feeling of happiness despite reservations

The "teaching sponsors" spend about 30-100 hours a month with the children. Ali, whose parents come from Albania, is always there. "I have been here for almost two years. I can always come here. If I have to do homework, then the people here help me, especially with German and English," said the 12-year-old who goes to a school nearby. He is cared for by people like Michael Siebert who is part of the federal volunteer service of Germany and has been accepted into a political science program. "You always have the feeling you are doing something meaningful," said the young man. 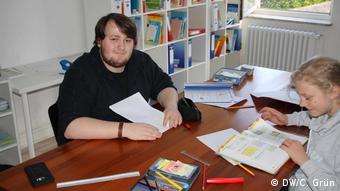 Even though word about Marxloh's bad image has gotten around, many people have applied for a job in the project. The volunteer Liliana Filipa Correia de Almada also had reservations about Marxloh. "At first I thought, 'Marxloh, oh my God.'  But it's not as bad here as everyone says it is. I can pass on my knowledge here and a get a feeling of happiness."

Nothing happens without donors

Christine Bleks managed to get exposure for the project. When Angela Merkel visited in 2015, Bleks was part of the discussion group that was chosen to meet the German chancellor. "Actually, I didn't want to go there. I feared a spectacle and lots of media hype. Afterwards I was glad I'd done it. And I must say that the chancellor has kept her word. I spoke to her, and explained, for example, that we do not have quick access to decision-makers or state authorities. She promptly organized a round table discussion with representatives from four federal ministries, numerous state ministries and the federal chancellery and I had the opportunity to present my points there," said Bleks.

The worldwide refugee crisis is getting worse. Donation requests during the holiday season in Germany show that the plight of refugees is not a priority for donors. Germans prefer to help out in long-term aid projects. (22.10.2016)

Raining money in Cologne: Charity campaigners give away thousands

Cloudy with a chance of cash? That was the forecast at least in the western German city of Cologne on Friday. The spectacle was all part of a campaign to raise money to combat poverty, hunger and conflict. (19.06.2015)