A transport startup backed by Richard Branson has inked a deal to build a Hyperloop system between the Indian cities Mumbai and Pune. It's unclear, though, if the technology addresses India's infrastructure bottlenecks. 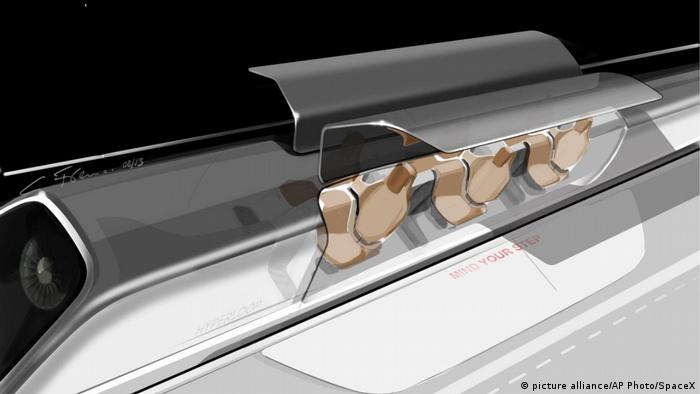 Virgin Hyperloop One, a Los Angeles-based transportation company, on Sunday signed a framework agreement with the western Indian state of Maharashtra to construct a super-fast Hyperloop transportation system connecting the cities Mumbai and Pune.

The proposed system would reduce travel time between the two cities to just 25 minutes from the three hours at present, the company said, adding that it would benefit 26 million people and ease the burden on local trains. Key details such as the total cost of the project and an exact timeline of launch are yet to be revealed.

Hyperloop One is backed by UK business tycoon Richard Branson, who serves as chairman of the firm. Following the inking of the deal, Branson released a statement saying the project in India would "help create a thriving, competitive megaregion."

"I believe Virgin Hyperloop One could have the same impact upon India in the 21st century as trains did in the 20th century," he wrote.

Branson said a Hyperloop demonstration track would be built within two to three years of the final agreement, and the project in Maharashtra would take a further five to seven years to complete. He also touted that it could result in socio-economic benefits worth billions of dollars and tens of thousands of new jobs as well as increased investment to the region.

Maharashtra, though, is not the first Indian state to embark on such a project. Last year, the government of the southern state of Andhra Pradesh joined hands with US-based Hyperloop Transportation Technologies (HTT) to introduce the system in the state capital region, Amaravati. If everything goes according to plan, this will be the first Hyperloop project to be implemented in the country.

The foundation stone for the transport system was laid by Indian Prime Minister Narendra Modi along with Maharashtra Chief Minister Devendra Fadnavis during an ongoing global investor summit in the state.

Since taking office in 2014, Modi's government has repeatedly vowed to modernize the country's vastly outdated and crumbling infrastructure. The government says it is investing $137 billion (€115 billion) over five years to renovate the crumbling network.

The Indian government hopes the Hyperloop technology will help address the infrastructure challenges India is confronting amid overpopulation and rapid urbanization.

But some analysts remain skeptical about the utility of Hyperloop. "There is a clear need for upgraded rail service between major cities in India. But it is not clear that the Hyperloop approach is either viable or the best approach," John Hansman, a professor of aeronautics and astronautics at Massachusetts Institute of Technology in the US, told DW.

Hyperloop came into global prominence after it was proposed by tech entrepreneur Elon Musk in 2013. The technology is viewed as a next-generation transportation system - a "fifth mode" of transport (after planes, trains, cars and boats). It uses magnetically-levitated pods and sealed partial vacuum transit tubes to move people and freight at supersonic speeds estimated to reach over 700 miles per hour (1,127 kilometers per hour).

The speeds would be faster than other existing high-speed transport modes such as maglev and high-speed rail.

Hyperloop has elicited a great deal of interest from investors, engineering firms and governments over the past several years, with countries like France, Sweden, the UAE and South Korea also considering building their own Hyperloops. When it comes to the actual implementation, however, the technology at this stage is unproven and tests are underway in several parts of the world.

Experts say that as it is something completely new, it will require rigorous testing that could take years. While some believe the concept is flawed and impractical, others point to problems related to land acquisition for such projects and stress strong public opposition to give up their properties to build new transport systems would make it difficult to implement them.

There are also questions hanging over passenger safety and comfort. "It is not clear whether hyperloop's very high speeds would be comfortable for passengers. Because it is a fixed guideway, the route needs to be planned with exacting precision so that passengers are not subject to uncomfortable g-forces on curves or dips," concluded a feasibility study by the US Department of Transportation (DoT) released in 2016.

Another factor is the costs involved in building the infrastructure needed to operate the system. While proponents of the technology argue that it costs less than other modes of transport like high-speed rail, critics disagree and underline that Hyperloop is still an undeveloped and immature technology. It's therefore difficult to have a clear understanding of all the costs associated with building and operating it, they claim.

"Hyperloop's cost estimates are lower than other modes, but as the technology is still conceptual and in very initial testing, there is uncertainty in both the underlying infrastructure needed to operate a system and the cost to construct it," the DoT report said.

"To make a real Hyperloop system work safely the system must be constructed with very high precision, if it can be accomplished at all. This will be expensive and the first system will be the most expensive of all," said Hansman.

It's "very unlikely" that this project in India will be completed on time, the expert underlined. "There are no systems or design standards. It is unclear if the system can be acceptably safe. Even if all the fundamental problems did not exist and construction started tomorrow the timeline would be difficult to meet."