Will democracy take hold in Pakistan′s restive tribal areas? | Asia | An in-depth look at news from across the continent | DW | 19.07.2019

The first-ever democratic election is being held in the restive Pakistani tribal region on the border with Afghanistan. Will democracy help stabilize an area long considered to be a base for Islamist extremists? 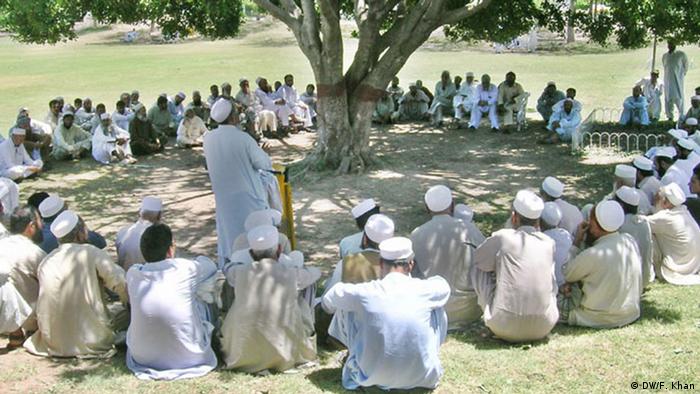 Pakistan's tribal region is undertaking its first-ever democratic election on Saturday, with newly formed districts sending representatives to a provincial assembly for the first time.

This loosely organized region onPakistan's northwest frontier with Afghanistanwas formerly called the Federally Administrated Tribal Areas (FATA). This rural mountainous area has long been seen by Washington and the West as a launching pad into Afghanistan for Islamist insurgents.

In May 2018, the districts in FATA were merged into Khyber Pakhtunkhwa province, ending 150 years of draconian colonial-era governance under a system called "frontier crimes regulation."

Now there is hope that bringing these areas into a democratic political process will promote stability.

However, the tribal region, home to 6 million people, has always ruled by tribal law, with councils of tribal elders holding the real political power. Whether elected representatives can merge democratic governance with traditional social mores remains to be seen.

Election troubles for the Pashtuns

Although people in the region are eager to participate in the election, there have been problems with democratic representation in the run-up to election day.

The Pashtuns are an ethnic group native to northwest Pakistan and the northeastern Afghanistan. In the past decade, tens of thousands of Pashtuns civilians in the region have been killed, and millions displaced, by the Taliban insurgency and military operations.

The Pashtun Tahaffuz Movement (PTM) is a civil rights movement that has widespread support among Pashtuns in the region, and espouses secular and liberal values. However, the Pakistani government and the country's all-powerful military are coming down hard on the PTM.

In May, two PTM lawmakers were arrested during a clash between PTM protesters and soldiers at a checkpoint in North Waziristan that left 13 people dead. The military claimed that the protesters opened fire first, but video footage purportedly showed that they were unarmed.

Since the violent clash, the PTM is experiencing a violent crackdown. Dozens of their top leaders have been arrested and their supporters are facing immense pressure from the government.

Pakistan's Election Commission says that the PTM is not a registered political party, although they have registered candidates for the election.

Manzoor Pashteen, the movement's leader, believes that the Pakistani military is behind the crackdown. The PTM gained prominence last January after protest broke out over the extrajudicial killing of a young Pashtun man in the southern port city of Karachi. The movement is campaigning to end extrajudicial killings. It also conducts landmine clearance operations and opposes use of military violence against civilians.

This week during a committee session, a senator from that Muslim League-Nawaz (PML-N), criticized the lack of media coverage for the election.

"The media is showing no interest in the first ever election in the tribal areas, in this situation we cannot trust this election will be transparent," said Senator Pervaiz Rashid

"The PTM leadership is not allowed to appear in the media, two of its elected leaders Mohsin Dawar and Ali Wazir were arrested, and a crackdown is going on against their workers."

Due to the tense security situation in the region, a military presence is planned for the polling stations. However, the move has stirred reservations from opposition parties who are saying that the election results will be manipulated in favor of Prime Minister Imran Khan's ruling Pakistan Tehreek-e-Insaf (PTI, Movement for Justice) party.

Imran Mukhlis Wazir, a candidate from Pakistan Peoples Party (PPP) in South Waziristan, said he was arrested last month after he spoke out against discrimination against opposition parties.

"The opposition parties are discriminated against and facing hurdles while government party has been promoted," he told DW.

Ayaz Wazir, a former ambassador hailing from the tribal areas, told DW that the people there want the change that they were promised after the FATA merger last year.

Read more: Pakistan: "Media should be accountable to the public, not the government"

"They are not getting the rights that they were promised after the merger. And no political leader from any party came in the area to campaign due to security threats, there is a tense environment and people think the elections are rigged already."

Rahim Yousafzai, a political analyst based in Peshawar, told DW that some political parties have raised questions about the military presence at polling stations as a method to engineer results.

Yousafzai also said that campaigning has been tightly controlled due to security threats.

"There has been no political activity seen in the area," he said, adding that the voter turn out for the regional election is expected to remain low.