WikiLeaks has released excerpts from closed-door paid speeches Hillary Clinton gave to Wall Street. The release comes as the US formally accused Russia of trying to impact November's election through cyberattacks. 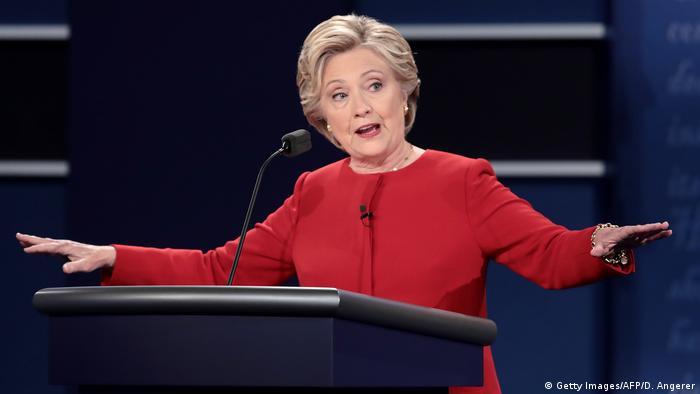 Excerpts from Hillary Clinton's closed-door paid speeches were released for the first time on Friday by WikiLeaks, in the latest leak to hit the US election.

Wikileaks posted what it said were thousands of emails from Clinton campaign chairman John Podesta's email account. It comes as the US government formally accused Russia of being behind cyberattacks trying to impact November's election.

The Clinton campaign has not confirmed the authenticity of the leaked emails.

The paid speeches to Wall Street executives were a major issue during the Democratic primary when Clinton's primary opponent Bernie Sanders called for the former secretary of state to release the contents of the speeches. Clinton refused, saying she would only do so if her opponents also released their speeches and taxes.

Tony Carrk, Clinton's research director, sent the highlights from the speeches to Podesta and other staffers in January, saying there were "a lot of policy positions that we should give an extra scrub."

The highlights include Clinton telling "Goldman-Black Rock" in February 2014 that "I'm kind of far removed" from middle-class problems "because the life I've lived and the economic, you know, fortunes that my husband and I now enjoy."

"I am not taking a position on any policy, but I do think there is a growing sense of anxiety and even anger in the country over the feeling that the game is rigged," she said, noting that she never had that feeling growing up.

Clinton, a former senator from New York, told the National Multi-Housing Council in February 2013 that "politics is like sausage being made."

"It is unsavory, and it always has been that way, but we usually end up where we need to be. But if everybody's watching, you know, all of the back room discussions and the deals, you know, then people get a little nervous, to say the least," she said.

In another speech to a Goldman Sachs symposium in October 2013, she talked about "holding Wall Street accountable (for the 2008 financial crisis) only for political reasons." In the same speech, she said the financial industry knows the business better than anyone else and suggested it should help regulate itself.

She told Deutsche Bank in October 2014 that if there was wrongdoing in financial markets, "people have to be held accountable and we have to try to deter future bad behavior, because the public trust is at the core of both a free market economy and a democracy.”

On the issue of campaign financing, Clinton admitted it would be difficult to run for president without raising "a huge amount of money."

"I would like it not to be so expensive. I have no idea how you do that," she told General Electric's Global Leadership Meeting in January 2014.

In another highlight, in a speech to Robbins Geller Rudman & Dowd in September 2014, Clinton touted her relationship with Wall Street.

As a senator from New York, she said, "I represented and worked with so many talented principled people who made their living in finance. But even thought I represented them and did all I could to make sure they continued to prosper, I called for closing the carried interest loophole and addressing skyrocketing CEO pay."

One issue marked by her campaign mentions Clinton is pro-trade, even as she has recently backpedaled on this position during the election cycle.

"My dream is a hemispheric common market, with open trade and open borders, sometime in the future with energy that is as green and sustainable as we can get it, powering growth and opportunity for every person in the hemisphere," Clinton told Banco Itau.

Other highlights marked by her campaign include cyber and email security, as well as the use of BlackBerries.

Julian Assange has only offered clues like "war," "Google," and "US elections" but they still pack a punch. The WikiLeaks founder hinted at the bombshell while speaking to reporters at an event in Berlin. (04.10.2016)

The State Department is reviewing about 15,000 undisclosed emails sent from a private email server used by Hillary Clinton while she was secretary of state. The next batch of emails will come out before Election Day. (23.08.2016)

The FBI has released notes of its investigation into Hillary Clinton's email. The former senator's presidential campaign has been dogged by revelations that she conducted State Department business via a personal account. (02.09.2016)