Wikileaks says its latest release of documents shows the wide reach of economic espionage conducted by the NSA in Germany. Documents released by the whistleblowers suggest an intense interest in the Greek debt crisis. 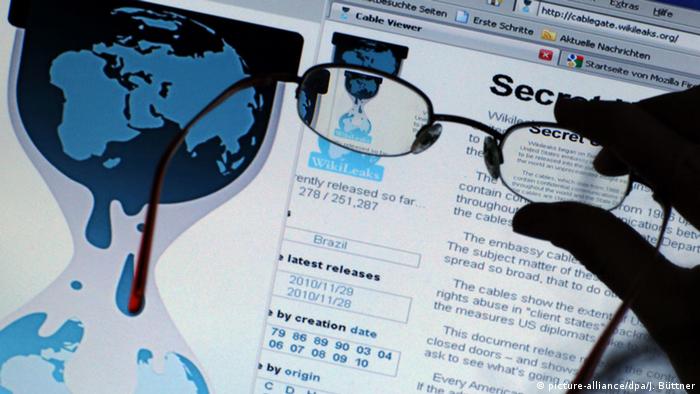 A new batch of documents released by Wikileaks on Wednesday purports to show the extent to which the spying conducted by the US National Security Agency (NSA) on German officials was economic in nature, as opposed to being focused on security issues.

As far back as the late 1990s, the phone numbers of officials in the German Ministry of Finance, including sometimes the ministers themselves, were targeted by NSA spies, according to a Wikileaks press release. The list of high priority targets for Germany are mostly telephone numbers within the finance ministry, some within the ministry of agriculture, a few within offices responsible for European policy, and advisors who assisted Merkel ahead of G7 and WTO meetings. One of the targets was within the European Central Bank itself.

NSA interest in the course of Greek bailout

Some of the espionage also dealt with the handling of the Greek debt crisis, particularly in "intercepted talk between Chancellor Merkel and her assistant, the Chancellor talks about her views on solutions to the Greek financial crisis and her disagreement with members of her own cabinet, such as Finance Minister Wolfgang Schäuble, on matters of policy."

The NSA was also interested in Merkel's discussions of "the positions of French leaders, and of the heads of the key institutions of the Troika: European Commission President Jose Manuel Barroso, European Central Bank President Jean-Claude Trichet and IMF Director Christine Lagarde," with regard to the Greece's bailout issues.

This intercept, which is dated to October 2011, is classified as highly sensitive, "two levels above top secret." Despite this, it was still cleared for distribution among the "US-led ‘Five Eyes' spying alliance of UK, Canada, Australia and New Zealand."

Wikileaks also says that the NSA was given a German intercept gathered by British Intelligence (GCHQ), which "details the German government's position ahead of negotiations on a EU bailout plan for Greece."

"The report refers to an overview prepared by German Chancellery Director-General for EU Affairs Nikolaus Meyer-Landrut. Germany was, according to the intercept, opposed to giving a banking license to the European Financial Stability Facility (EFSF), however it would support a special IMF fund into which the BRICS nations would contribute to bolster European bailout activities."

Julian Assange, Wikileaks' embattled editor-in-chief, made a statement on Wednesday's release, saying that it "further demonstrates that the United States' economic espionage campaign extends to Germany and to key European institutions and issues such as the European Central Bank and the crisis in Greece."

"Would France and Germany have proceeded with the BRICS bailout plan for Greece if this intelligence was not collected and passed to the United States - who must have been horrified at the geopolitical implications?" he asked.

The "Süddeutsche Zeitung" daily was given access to the leaked documents. It reports that a spokesman for the German government said Berlin is not familiar enough with the information published by Wikileaks to offer an analysis or response.

Reporters Without Borders has accused Germany's foreign intelligence service of spying on emails sent by the NGO to contacts abroad. The BND screens millions of emails annually. (01.07.2015)

Germany's low opinion of the USA

The USA is losing face among the German citizenry. In an interview with DW, US expert Karsten Voigt talks about how this loss of respect came about, and what America has to do to improve its image. (24.06.2015)