The Mexican cartel leader's wife Emma Coronel Aispuro pled guilty to having participated in her husband's criminal activities. In 2015, she helped him in a dramatic escape from prison. 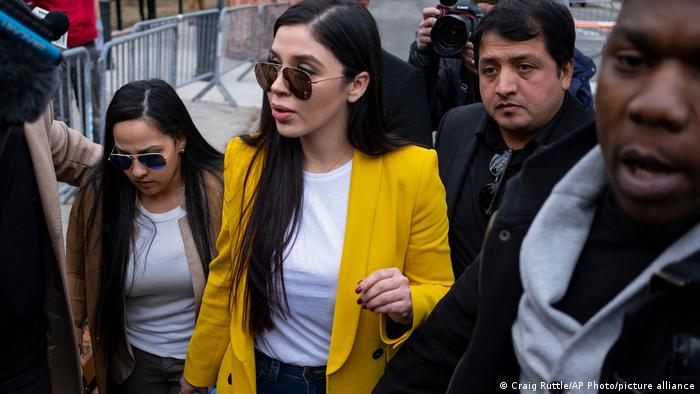 She had faced a minimum of 10 years in prison and prosecutors had asked for four years. Since she had no criminal record and was not considered a leader in the organization, nor was she directly involved in any violent acts, she received a lighter sentence.

The judge also ordered her to pay $1.5 million (€1.3 million) in a restitution deal agreed before the hearing. She will also be given credit for nine months already spent behind bars since her arrest.

The 32-year-old was arrested in February at Dulles International Airport in Virginia and has behind bars since then. As part of her sentencing, she will also serve four years of supervised release after the prison sentence.

"I express my true regrets for any and all harm that I may have done," Coronel Aispuro said in Spanish before the sentence was announced. "I am suffering as a result of the pain that I caused my family."

She asked for a sentence that would allow her to watch her 9-year-old twin daughters grow up. Pronouncing the sentence, Judge Rudolph Contreras wished Coronel good luck. "I hope that you raise your twins in a different environment than you've experienced to date" he told her.

Defense attorneys argued that she was a 17-year-old from an impoverished family when she met Guzman and married him on her 18th birthday.

"This began when she was a very impressionable minor married to a powerful man more than three decades older,'' Jeffrey Lichtman said.

While both the prosecution and defense argued that she as not involved in the core business of Guzman's Sinaloa Cartel, she was still instrumental in his dramatic escape out of a prison in Mexico in 2015.

Prosecutors said Coronel Aispuro smuggled a GPS watch to him disguised as a food item, which helped those digging the tunnel pinpoint his location and reach him.

She also smuggled Guzman's messages to his subordinates while he was in prison, which allowed him to stay in control of the Sinaloa cartel while behind bars.