George Orwell's "1984" is not the only classic that's celebrating a comeback. Hannah Arendt's philosophical essay "The Origins of Totalitarianism" has also spiked in interest recently. Here's why it's so relevant. 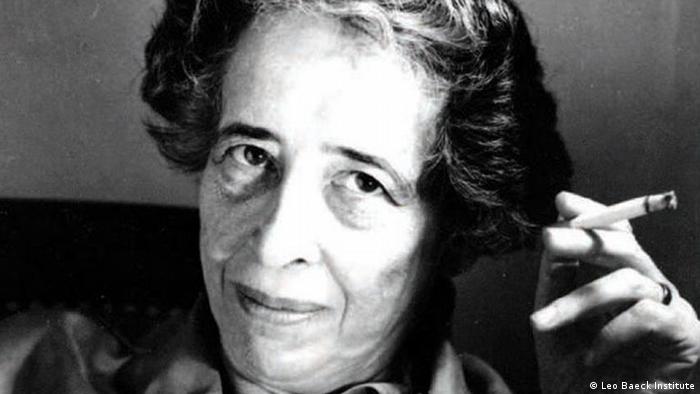 Born in Germany to a Jewish family, Hannah Arendt (1906-1975) fled when Adolf Hitler rose to power in 1933. She spent time as a stateless refugee in France and was deported to an internment camp under the Vichy regime. She emigrated to the United States in 1941, later becoming a US citizen.

Having experienced first-hand the near collapse of an advanced civilization, she also became one of the first political theorists to analyze how totalitarian political movements could rise in the early 20th century.

The roots of Nazism and Stalinism are described in her first major book, "The Origins of Totalitarianism," originally published in English in 1951.

It has been compulsory reading for many college students ever since, but the dense political work of over 500 pages isn't typically a bestseller. It has been flying off bookshelves in the US since Trump's inauguration; Amazon even briefly ran out of stock this week.

These new Arendt fans are presumably trying to understand what Trump's presidency could lead to. As it might take a while for readers to get through her heavy essays, here are a few spoilers: "Trump is not a totalitarian in her understanding; he incorporates what she calls 'elements' of totalitarianism," Roger Berkowitz, professor and head of the Hannah Arendt Center for Politics and Humanity at Bard College in New York, explained in a recent DW interview.

However, strong warning signs shouldn't be ignored, added Berkowitz: Arendt believed that "one of the core elements of totalitarianism is that it's based in a movement... and Trump has explicitly called himself the mouthpiece of a movement. That's a very dangerous position for a politician."

Arendt's analysis focuses on the events of that period. Although her observations obviously couldn't explain everything about today's complex political developments, many are still revealing even now, as the right-wing populism that's spreading throughout Europe and the US is reminiscent in different ways of the situation in the 1920s and 30s that allowed the Nazis and Communists to rise.

Her books provide insight into the mechanisms that allow so many people to readily accept lies in times of global uncertainty. While major newspapers - from "The New York Times" to "The Washington Post" - are revisiting her writings, social media users are widely sharing quotes such as this one: 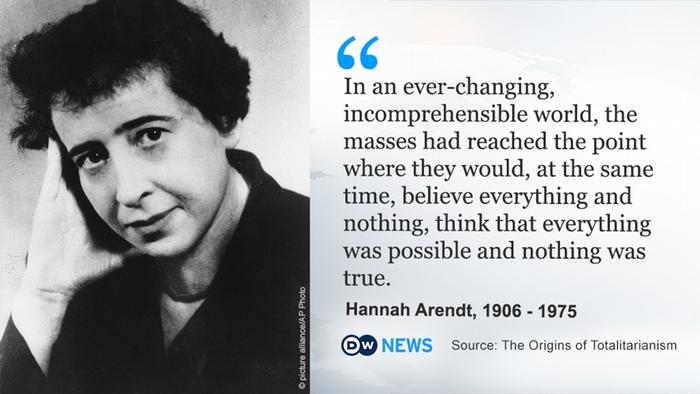 In such a context, repeated, simplified - and false - storylines, which blame scapegoats and offer easy solutions, are preferred over deeper analysis leading to informed opinions. This approach was applied by totalitarian leaders such as Hitler, Arendt wrote. In this sense, Trump's strategy of placing blanket blame Muslims or Mexicans for terrorism, crime or unemployment, and claiming that a travel ban or a wall will be an easy solution, is not new.

According to Arendt, totalitarian leaders at the beginning of the 20th century based their propaganda on this assumption:

Trump has pushed this approach to new extremes; even though there are more fact-checkers than ever dedicated to exposing his blatant lies, the president's cunning tactic is to discredit these reports as coming from the established, "dishonest" media. Meanwhile, his movement's beliefs are backed by widely available alternative sources. 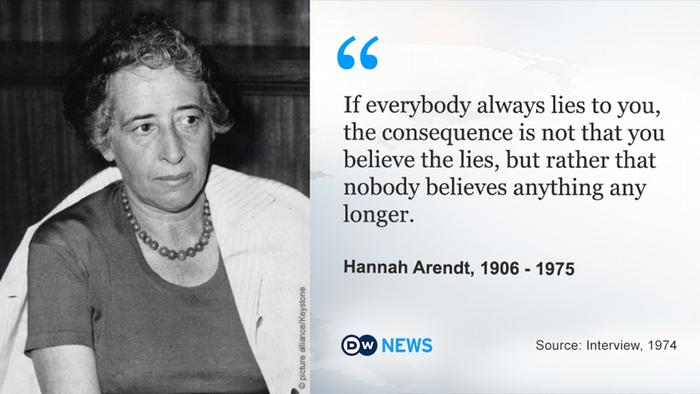 The 'banality of evil'

In Arendt's reporting on the 1961 trial of one of the major organizers of the Holocaust, Adolf Eichmann, she famously came up with the phrase "the banality of evil" to describe her view that evil might not be as radical as one might expect.

The resulting book, "Eichmann in Jerusalem: A Report on the Banality of Evil," explains how crimes were committed through people who thoughtlessly obeyed orders to conform to the masses.

The definition of thoughtlessness that she provided in a work first published in 1958, "The Human Condition," could just as well have been written to describe President Trump's hastily drawn executive orders and his struggles to justify them:

Of course, such quotes taken out of context may be easy and comforting to share online, but they do not reflect the entirety of Arendt's ideas. Similarly, those hoping to find all answers to "The Origins of Totalitarianism" are bound to be disappointed. Arendt didn't pick that title herself - her publisher did. She believed the world was way too complex and messy to pinpoint the roots of totalitarianism, according to Berkowitz.

While revisiting her works, impossibly trying to predict if we'll be overtaken by new forms of totalitarianism in the future, one can also find consolation in another of Arendt's observations: She considered civil disobedience an essential part of the United States' political system - and the country's strong protest movements currently demonstrate this again.

As she famously said: 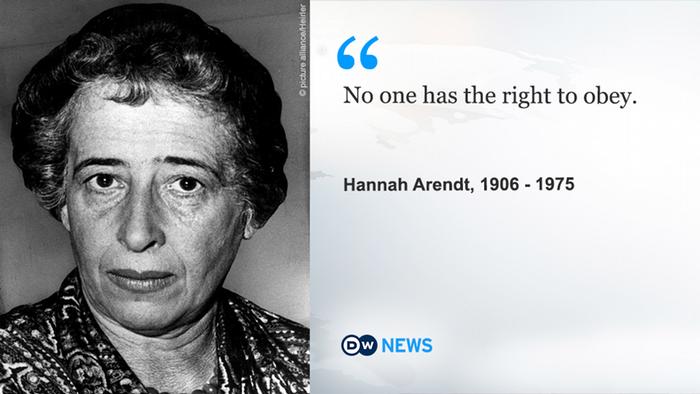 During the first week of the Trump administration, fraught with "alternative facts," readers are turning to George Orwell's 1949 book to understand the political situation. "1984" has shot to the top of bestseller lists. (25.01.2017)

From scary to silly: five times Trump was associated with pop culture

Sales numbers of the dystopian novel "1984" have spiked since Donald Trump took office. Here are four more ways the US president has recently invoked memories of popular entertainment. (25.01.2017)