Devil or fool? Several churches in Germany have stained-glass windows portraying Adolf Hitler. Who were the artists and what are the artworks all about? 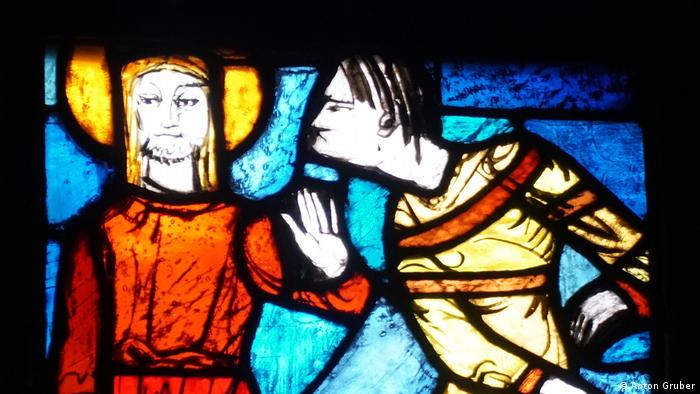 Weil der Stadt is a town of about 20,000 people in southwestern Germany, west of Stuttgart. At the Catholic church of St. Peter and Paul, pastor Anton Gruber has been welcoming his congregation as well as many curious visitors for the past 11 years.

Some people stop by the church because it is right on a popular bike path, while others have come to peer at one particular stained-glass window. They often say "the features of Hitler are recognizable," Gruber told DW. "Most people are simply curious, no more and no less," the clergyman says about the pane that dates from 1939/40.

It is part of a larger window of nine panels depicting scenes from the life of Jesus. The pane on the far upper right depicts temptation, with the devil testing Jesus' faith — and the artist JoKarl Huber has clearly given Hitler's facial features to his depiction of the devil. The devil's outfit is yellow, a color that stands for envy and possession. 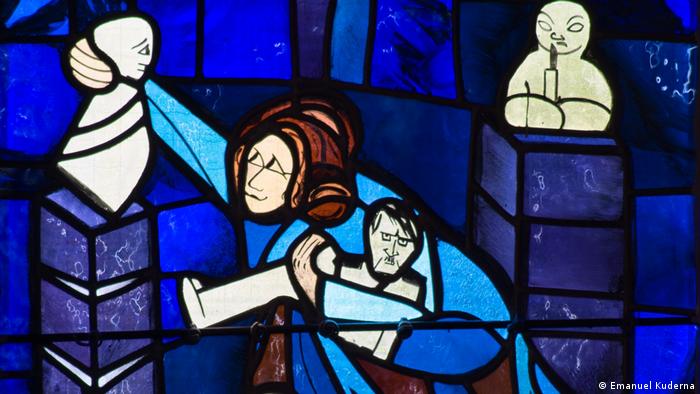 Getting rid of idols: A stained-glass window in Vasperviller, France

Most visitors have no problem understanding and contextualizing the depiction of the dictator as evil personified, Gruber says, adding that the artist never commented on his work, so one can only assume that he wanted to portray Hitler as a figure of evil. The artwork was created in 1939, at the height of the Nazi regime.

Knowing the artist's story helps understand the imagery, Gruber argues. "In 1936, the Nazis labeled JoKarl Huber's art as 'degenerate,' and he was no longer allowed to work," he says.

St. Peter and Paul's priest at the time, August Uhl, granted the artist asylum, along with a commission for renovation. Uhl's sermons tended to be in opposition to the Nazis, which is why the Gestapo allegedly often showed up at his home, Gruber says.

There is no doubt "the stained glass window represents an unequivocal and courageous statement against National Socialism and its leaders," German historian Michael Kuderna told DW. His most recent book is about Hitler images in churches.

In the course of his research, he found five images of Hitler that predate 1945 and nine that date to after 1945. With the early images, it can be difficult to prove they really show the dictator, but the later images clearly show Hitler, for instance as an executioner, or a villain burning in hell.

"After the war, depicting Hitler in churches was no longer as problematic as before 1945, when people feared retribution," the historian explains.

As time passed, the imagery changed: "Hitler was increasingly shown in other contexts, treated in a more distanced way, even to the point of caricature," Kuderna adds.

His research started 20 years ago at the church in Vasperviller. Created after 1945, a stained-glass window shows a biblical story from the Old Testament: Rachel, Laban's daughter, steals her father's household idols.

The artist, Gabriele Kütemeyer, gave one of the idols Hitler's face. "The artist's father was a staunch opponent of the Nazis; he was in Gestapo custody in Berlin for a time," Kuderna explains, adding that the artist often heard her father say the Germans followed false idols. "That gave her the idea to look for that connection in the artwork." 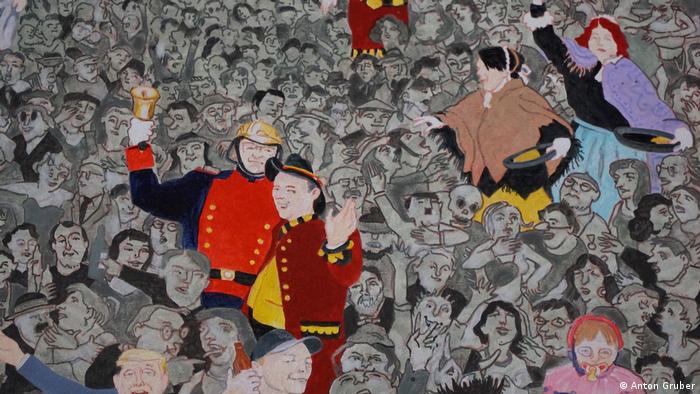 The fools of the world: An artwork on an altar in the church of St. Peter and Paul

Among the 14 illustrations Kuderna identified as clearly depicting Hitler, one of them — showing Hitler with Paul von Hindenburg, the German president who played a key role in the Nazi seizure of power — was removed after 1945.

The historian points out that right after war, "people didn't like to talk about these things, they felt embarrassed." As a result, some of the images were hidden away while others were vandalized.

Kuderna mentions one case of a window in Munich by artist Max Lacher that portrays Hitler as a kind of torturer. Early on, it was splashed with ink but later got protected with a barrier.

The same artist created a much more famous image in the town of Landshut, a stained-glass window in St. Martin church that shows Hitler and fellow Nazi rulers Goebbels and Göring torturing St. Castulus.

After World War II, the Americans demanded its removal, but had a change of heart when told that the artist was a resistance fighter in the last weeks of the war.

Clearly, such images should not be hidden, or removed, Kuderna argues— they can serve as a basis to deal with the past. "Even if it's difficult, because to this day, there is a lot that we haven't processed."

Pastor Anton Gruber also favors an open and transparent discussion of such depictions. "The images that were created during the Nazi era are a testimony to history," he says.

Gruber thinks it is important that the church is alive and well, and presents works of art from different eras; it should not just be a museum of the past. "In my church, for example, we have items from 1500, 1750, from 1939/40, but also artworks from 2020."

One of the more recent depictions of Hitler in Gruber's church is a painting by Dieter Gross added in 2018 to the back of the wings of the Epiphany altar. It shows Jesus Christ surrounded by a crowd of people supposed to represent the fools of the world. They include Donald Trump and, further in the back, Adolf Hitler.

"The question is, how can I represent Hitler as a simple fool among many, next to all the others?" the pastor asks. "This is about giving people food for thought: Where would I stand in the crowd of fools in the picture? How much of a fool am I?"

Historian Kuderna says that this last depiction of Hitler is the strangest he has encountered in his research. "It's funny and beautiful, but it makes you think." He is still not sure though whether the image works or whether such a depiction does not ultimately trivialize Hitler.

Anton Gruber, the church's pastor, leaves the interpretation and discussion to his congregation and the visitors.