Why so many German Turks support Erdogan | Germany | News and in-depth reporting from Berlin and beyond | DW | 01.08.2016

Why so many German Turks support Erdogan

The demonstrations in Cologne on Sunday in favor of Turkey's president showed there are many Turks in Germany who support Recep Tayyip Erdogan, even after the failed coup. There are many reasons why. 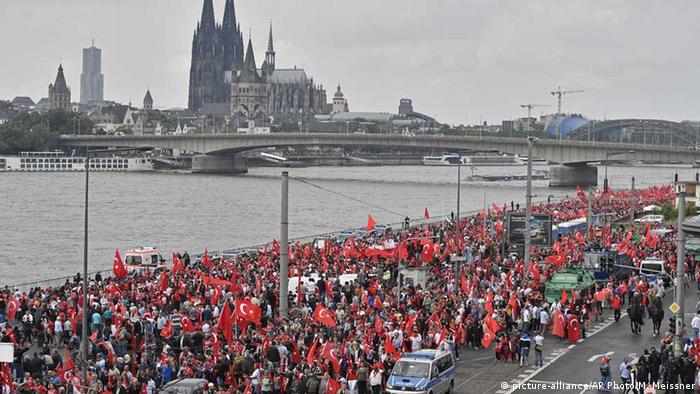 "I often very clearly criticize Erdogan, but I do not forget how much he has improved Turkey from 2002 through his election as president," Talat Kamran told DW. Many of Germany's Turks hold views similar to Kamran, who was born in Turkey in 1959, grew up there and later moved to Germany to study political science. For her, Erdogan is the man who reined in Turkey's military, sparked an economic boom and drove urbanization and modernization.

Kamran has led Mannheim's Institute for Integration and Inter-Religious Dialogue since 1996 in an effort to strengthen understanding between Muslims and Christians, Germans and Turks. Kamran strongly criticizes the current personal attacks and has called for more calm and understanding. "Germany's Erdogan-critical perspective isn't wrong, but it does not take the Turkish perspective into account," said Kamrun.

Many, particularly young Turks, want to not only strengthen Erdogan himself, but send a signal for democratization.

"Obviously the democratization process in Turkey is not yet over, but the people want to move forward and they see Erdogan as a strong figure. If not, the people fear a civil war similar to the situation in Iraq or Syria," said Kamran.

Simple people from the country

Kamran points to Turkey's history following the coup in 1980. More and more people moved from the poorer Anatolia region into the cities, establishing a clear counterweight to the urban elite. "Many of Germany's Turks have their roots in Anatolia. For them, Erdogan will always be one of their own." Erdogan indeed hails from a modest, devout family, just like many of the first generation of guest workers who came to Germany from Turkey in the 1960s and 70s.

Now the second and third generations in Germany are siding with Erdogan, explains Bulent Bigli, the general secretary of the Union of European-Turkish Democrats (UETD), one of the organizers of Sunday's demonstrations. The media reports coming out of Germany have angered many Turks. The press are focusing more on the coup and the prospect of a weakened Erdogan than the supposed victory of democracy over the putschists. 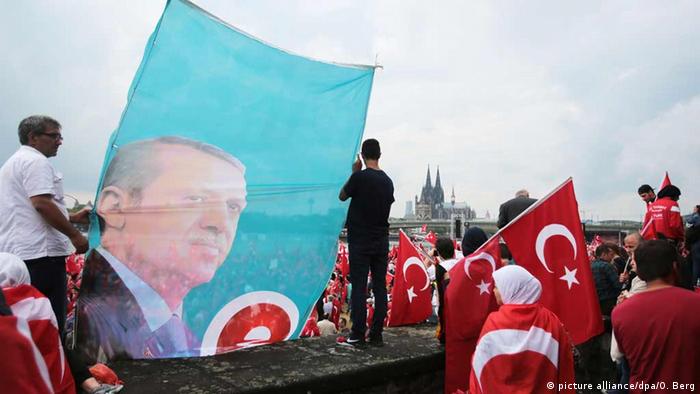 Erdogan supporters: He is one of us

Journalist Cigdem Akyol's book "Generation Erdogan" offers insight into the current situation. Above all, Erdogan has Sunni Muslims, and thus the conservative majority of society, on his side, she said. If the German media are asking how somebody could support a man who oppresses his opponents and restricts press freedoms, then, according to Akyol, they need to remove their "German glasses." After four military coups, Turkey is longing for stability, and "that is why the people are thankful for Erdogan," said.

In the past, the secularists looked down on women wearing headscarves as the people who cleaned their toilets. According to Akyol, that has completely changed under Erdogan. Even his wife wears a headscarf. "Erdogan gave Turks national pride again, and that extends to many of the 1.5 million German-Turks," said Akyol.

Ludwig Schulz, a Turkey expert at the German Orient Foundation in Berlin, confirmed that many of Germany's Turks saw the failure of the coup as a victory for Turkish society and democracy. Schulz explained the national pride and support for Erdogan came from many people of Turkish origin who were predominantly informed by Turkey's government-regulated media.

In every conversation with a Turkey expert, it is always noted that not all German-Turks are supporters of Erdogan. Roy Karadag, a political scientist at the University of Bremen, for example, told "Die Welt" newspaper: "Among German-Turks there are increasing conflicts over who speaks in their name, who can act and mobilize."

The UETD wanted to show in Cologne that most of Germany's Turks backed Erdogan, he added. The discussion has heated up as Germany's diplomatic relationship with Turkey grows increasingly tense. The head of Germany's Turkish Society, Gökay Soufuoglu, told "Focus" magazine: "There is a rift in Turkish society. It is destroying friendships. Even among families it is causing problems."

Following the pro-Erdogan rally in Cologne, many Turks are contemplating the status and value of free speech in their country. Diego Cupolo reports from Ankara. (01.08.2016)

Visa-free travel for Turks in exchange for taking back refugees? It's not as easy as Turkey may think. Nor is blackmail, writes DW's Europe correspondent Bernd Riegert. (01.08.2016)