Ankara has summoned the German ambassador's deputy over the decision to ban President Erdogan from addressing a rally in Cologne via video link. Thousands of Erdogan supporters gathered in the town at the weekend. 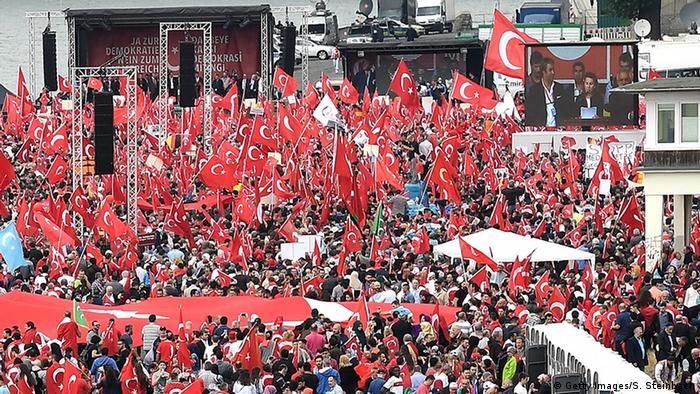 Sunday's Turkish rally in Cologne has sparked a new diplomatic spat between Ankara and Berlin. The Turkish government on Monday summoned Germany's charge d'affaires in Ankara to protest a court decision to ban Turkish President Recep Tayyip Erdogan from addressing the event via video link.

Germany's constitutional court intervened on Saturday evening, just hours before the demonstration began, confirming earlier court decisions not to allow the large screen set up in Cologne to show a live video link from Turkey - or indeed anything other than what was happening on stage.

The decision was condemned in Turkey - presidential spokesman Ibrahim Kalin was among several politicians to call the ban a violation of free speech and assembly rights. 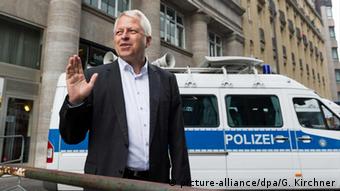 But the German government remained defiant on Monday. Foreign Ministry spokesman Martin Schäfer told news agency EPD that the decision had been upheld by three separate courts, before pointedly adding that this was "a nice expression of the rule of law."

There was a flurry of late and hasty court decisions in the days leading up to Sunday's demonstration as organizers tried to allow Erdogan and other leading politicians to address the crowd from Turkey.

The chief of police in Cologne, Jürgen Mathies, initially banned organizers from setting up a video screen altogether. "During the assessment [of the event] we came to the conclusion that this was already a very emotional situation," a police spokesman told DW. "And if speeches by the foreign minister or even Erdogan himself had been aired there, then the whole thing might have boiled over - that was our estimation."

That ban was partially overturned by the city's administrative court on Friday, which ruled that the screen could be set up, but could only be used to show what was happening on stage.

The pro-Erdogan organizers then filed an appeal with the state administrative court - whose judges summarily dismissed it. In response, the organizers took their appeal to Germany's highest court, the constitutional court in Karlsruhe, on the grounds that their right to demonstrate was being impinged.

This argument was rejected by police chief Mathies on Saturday, who told local media, "I can't imagine that Mr Erdogan has anything like those rights here."

The constitutional court itself denied the appeal in part because of an administrative error - the organizers' lawyer did not have the right documentation to represent them, the court said.

But the ruling also added that "it was not apparent that the decisions being challenged had failed to recognize the plaintiff's fundamental rights."

According to a police statement published on Sunday, the regulation was actually violated at around 1:30 p.m. - before the main rally began - when a pre-recorded interview from Turkey was shown on the screen. The police spokesman told DW that this had been shut down immediately (so quickly that he could not say who was being interviewed) and police delivered a warning to those responsible.

The police also intervened on two other occasions when the screen showed live shots panning across the Cologne crowd, as this also violated the court stipulation that only the stage could be shown. 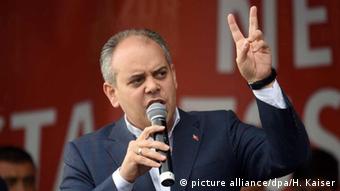 Very little trouble was reported at the rally, which police said had been attended by between 30,000 and 40,000 people. Some minor counter-demonstrations were also held by far-right and far-left groups, as well as an anti-Erdogan alliance of Left and Green party youth organizations.

But organizers of the main event were at pains to stress that speakers from across the Turkish political spectrum had been invited, including opposition parties, and that its characterization in the German media as a "pro-Erdogan rally" was false.

Bülent Bilgi, general secretary of the Union of European Turkish Democrats (UETD), which co-organized the event, told "Ruhr Nachrichten" that the rally was intended to show the "harmony in the Turkish community" and demonstrate against the recent attempted military coup, which all political parties in Turkey opposed.

Nevertheless, DW reporters on Sunday noted that the rally was dominated by Erdogan supporters, and the UETD is considered a European lobby organization for President Erdogan's Justice and Development Party (AKP).

The only representative of the Turkish government to speak at the rally was German-born Sports Minister Akif Cagatay Kilic, who told reporters on Sunday, "The message that is supposed to come from this event is that all parties and NGOs in Turkey stand together against the coup and want to defend democracy."

Germany is home to Turkey's largest diaspora, with some three million people of Turkish background living in the country.

Turkey's foreign minister has warned of the consequences should the EU fail to deliver on visa-free travel. EU officials are wary of easing travel restrictions after the crackdown in the wake of the recent failed coup. (31.07.2016)