Why Poland′s government is up in arms about a children′s charity | Europe | News and current affairs from around the continent | DW | 15.01.2019

Why Poland's government is up in arms about a children's charity

A prominent mayor's murder at Poland's largest charity event has put a spotlight on the country's conservative government — and how a fundraiser collecting money for hospitals could be a thorn in the government's side.

All over Poland, streets and squares in cities and towns become giant outdoor stages for concerts and other events on the second Sunday in January. Gdansk hosted the grand finale of the "Great Orchestra of Christmas Charity" fundraiser, with Mayor Pawel Adamowicz addressing the crowd. The mayor was then attacked by a man with a knife. Witnesses heard the attacker shout that he was wrongfully imprisoned under a previous national government led by Civic Platform (PO).

According to agency reports, medics resuscitated Adamowitz, a PO member, at the scene of the attack before whisking the 53-year-old off to the university hospital for emergency surgery, but surgeons were unable to save him and he died of his injuries on Monday. 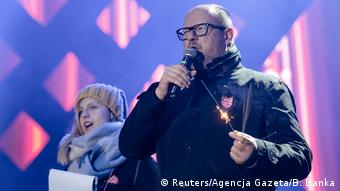 Immediately after the attack took place, security forces overpowered and arrested the assailant on site. Authorities say he is a Gdansk resident with a criminal record for holding up several banks.

Prime Minister Mateusz Morawiecki wrote on Twitter that the "attack on Pawel Adamowicz's life and health deserves the utmost condemnation."

The "Great Orchestra of Christmas Charity" (WOSP) fundraiser has been held for the past 27 years. Initiated by the charismatic Jurek Owsiak, the event, intended to aid children's hospitals, is regarded as the most popular fundraiser in the country. Every year, celebrities, school classes, associations and private individuals outdo one another with ideas for auctions to raise money, including a meal with European Council President Donald Tusk, a tour with an armored car, a day with a TV star or a bungee jump. Thousands of volunteers roam the country's streets with donation boxes. People who donate receive a red heart sticker.

The media readily report about the patients and their families. "They saved my mother. I had no chance of survival, I weighed less than a kilo and fit into my papa's hand," Ada Zalewska reports on Facebook. Today, she is one of the volunteers collecting donations for the WOSP every year to help other premature babies. "Support us," the young woman urged people on the street.

The fundraiser has helped finance equipment for the country's often underfunded hospitals since 1992. The largest sums went to maternity wards, helping improve medical care for sick and premature newborns. Appliances in other units in many Polish hospitals all over the country sport red heart stickers, too: The WOSP donations allowed hospitals to buy resuscitation equipment and heart monitors by the hundreds. 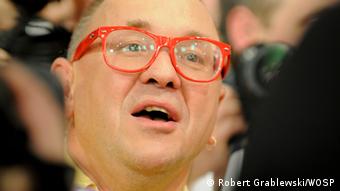 Jurek Owsiak: The radio host and rock musician founded the children's charity — and became an enemy of the ruling PiS

Rock musician and radio host Jurek Owsiak is the man behind the charity event. When he first urged people to donate to a children's hospital during a radio show in 1992, the money collected exceeded all expectations. As a result, he formed a foundation that organizes the annual fundraiser. But Owsiak has irritated the national conservative PiS government with his liberal opinions and ability to continually motivate masses of supporters — any politician's dream.

The conflict between WOSP organizers and the PiS has been smoldering since 2015. Polish embassies are no longer allowed to participate in the fundraiser, and neither is the military, which in the past donated flight simulator classes. "Officials who participate should hand in their notice the next day," a PiS lawmaker warned. 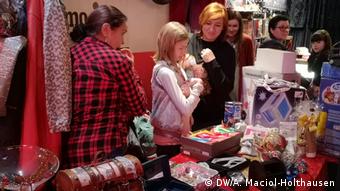 Gifts and donations collected at an event in January 2019 in Oberhausen, Germany — one of numerous solidarity events abroad for the hugely popular Polish children's charity

Attacks in the media

PiS-controlled public television would rather lose millions of viewers than broadcast WOSP concerts live, which have been a tradition for more than 20 years. Owsiak is now the main character in a cartoon where he hands a female politician the donations instead of giving them to hospitals. The message is clear and it goes hand in hand with insinuations by the pro-government media that Owsiak is embezzling donations. In an attempt to vilify PiS opponents, the animated clay figures have ugly, distorted faces.

The smear campaign against Owsiak has also affected the "Pol'And'Rock" summer festival. The biggest free open-air festival in Europe takes place in the town of Kostrzyn on the border with Germany and attracts hundreds of thousands of Polish and foreign visitors every year. It was launched in 1995 to thank the volunteers who helped with the fundraising campaign. But the festival, too, has been hanging by a thread after Poland's Interior Minister Mariusz Blaszczak in 2017 spoke of a terrorism threat, which he justified by pointing to refugees living in neighboring Brandenburg, on the German side of the border.

Inside Europe: The Polish charity the country's rulers love to hate

Owsiak made himself the ruling party's enemy for good when he then decided to invite refugees from Germany to the festival, along with representatives of all religions and several NGOs. The PiS is strictly opposed to Poland taking in refugees.

"The authorities don't care about security; only about preventing the festival altogether," Owsiak said at the time.

Yet the smear campaign doesn't appear to be detrimental to Owsiak and his cause. Every year, more people get involved in the fundraising campaign, and more money is raised. Several hundred million euros have been raised over the years. The WOSP is in fact the most-trusted Polish organization, according to a recent survey published by the liberal daily newspaper Gazeta Wyborcza.