Why German photographer Wolfgang Tillmans is a 21st-century Renaissance man

Wolfgang Tillmans didn't exactly reinvent the art of photography, but he has managed to make it more political. The Tate Modern in London is celebrating the German photographer with a special exhibition.

"Tillmans does not take pictures - he makes pictures." Chris Dercon, exiting director of the Tate Modern in London and incoming director of the Volksbühne theater in Berlin, gave perhaps the most fitting description of Wolfgang Tillmans.

Indeed, the German photographer's is meticulously organized and premeditated. No single detail is left to coincidence; no image, no catalogue and no exhibit. And he has a way of connecting political themes with poetry like no other.

Born in the western German city of Remscheid, Wolfgang Tillmans was the first non-British artist to receive the coveted Turner Prize in 2000.

Through June 11, 2017, the Tate Modern is showcasing Tillmans' work in 14 rooms, featuring a mixture of portraits, still lifes and abstract art, and following his journey from analogue to digital photography. Video installations and music projects are also part of the multi-faceted exhibition.

The many faces of Wolfgang Tillmans

There's a lot on display, from wall-to-wall coastal landscapes to the image of a naked grown man in the fetal position. Then there's the picture of a little plant sprouting out from grooves in between moss-covered cobblestones. 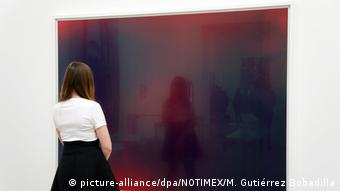 The show presents not only Tillmans' works, but also his artistic motivation

Another photograph shows a set of scrunched up linens against a black background imitating clouds. To round out the show, there's also a series of experiments with color and shape, which Tillmans created in his workshop in London, where he's been living for many years.

To gain some insight into Tillmans' creative genius, the Tate Modern dedicated one of the gallery rooms to exploring the things that inspire the artists, with displays highlighting a cornucopia of newspaper clippings, artistic studies and other influences.

This unusual documentation shows the level of thinking that goes into Tillmans' work; from assembly lines at IKEA kitchen factories to war crimes immediately after the invasion of Iraq, these sources trace Tillmans' concerns.

'Tilmans has an eye for the world'

He executes his political messages intelligently, always trying to hold a mirror up to the world. Even if some might consider his messages to be subjective, Tillmans makes up for it by approaching the key issues of the day in a poetic manner. Most recently, the artist got involved in UK politics by designing anti-Brexit posters. These are also featured at the Tate Modern show.

The museum does great justice to a versatile artist who is almost as recognized for his social conscience as he is for his art. In the words of co-curator Decon: "(Tillmans) has an eye for the world. He's a Renaissance man for the 21st century."

Wolfgang Tillmans and his creative defense of ethical standards

With his camera, Wolgang Tillmans explores the big questions in life. The Tate Modern in London is honoring the German artist with an extensive exhibition. (16.02.2017)