Photographer Wolfgang Tillmans: 'Brexit draws on a desire to disrupt and destroy'

Photographer Wolfgang Tillmans is the only German Turner Prize recipient. The London-based artist created a poster campaign to warn Britons against voting to leave the EU. He told DW why he decided to get involved. 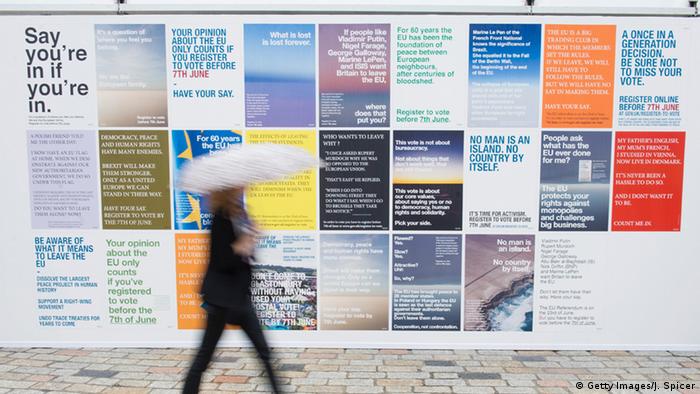 DW: Mr. Tillmans, you're very engaged at the moment in Britain to convince its citizens to vote to remain in the EU. Why?

Wolfgang Tillmans: Brexit's impact is not only on 63 million Britons. Brexit is about the mood that is currently gripping the world - this diffuse discontent, a desire to disrupt and destroy. This mood is directed at the institutions that shaped and supported the post-war world. It's about the UN and NATO. You know, for example, how Donald Trump speaks about NATO? This goes hand in hand.

If the referendum goes poorly, that could create a domino effect. The enemies of these institutions which stand for temperance and negotiation, the opposite of black-and-white thinking, will have considered this a victory.

A weakened EU would be a celebration for Russia. It would be a party for the far-right within the EU. In that respect, I see the referendum as an epochal occasion, especially because it will affect such a large, important nation. This is not just some small referendum that happens all the time. 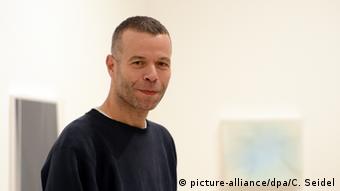 The first non-English person to have won the Turner Prize, Wolfgang Tillmans lives in London

It's also moving to me for personal reasons: I'm strongly connected to Great Britain through my work. I have spent most of my adult life there, living there since 1990. I see myself as a product of post-war history, of atonement and change.

Three reasons for the European Union

Could you give us three reasons why you think we are better off with the EU than without it?

The costs of international telephone calls would never have been reduced. All 28 member countries could have never gone up against telephone giants on their own. Ten years ago, a telephone call from Paris to London cost 2 pounds per minute. Today it's just a fraction of that cost. That's something tangible everyone can respond to. Apply this to all of the world's challenges. The economy creates givens: Google and Silicon Valley determine our reality.

The EU and US anti-cartel agencies are the only sort of body that could even take them on.

Reason two: human rights. The EU protects human rights via its agreements. It isn't just about money whenever the EU signs a trade agreement, it is also about the rules and regulations concerning workers' rights, labor safety standards, environmental standards. If the EU did not exist, then other countries like China would be dictating these standards.

And the third reason: thanks to the EU, there are fewer wars in Europe. When 28 nations have a relationship to each other, they need to sit at the same table and speak to each other, without drawing a weapon. Look at Ukraine …

Are the enemies of freedom also damaging culture in Great Britain?

The referendum in Great Britain has sharpened the tone tremendously. Even in Germany, a million refugees have exacerbated the tone of the debate massively. There's a lot of toxins floating in the air, a poison that is divisive. I can only hope that our livers are strong enough to detoxify that poison (laughs).

Yeah, that'd be great. But I also don't know of any anti-Brexit campaigns being initiated by brain surgeons, neurosurgeons nor neuro-biologists and know of no initiatives from British physicists. I'm a bit disappointed that so quickly after the EU referendum there was no outcry that ran through culture, no one who told the people, "This is about our existence! This will change my life!" That nothing has come out is something I wonder about.

On the other hand, it's not everyone's style to suddenly take on another medium to get the message across. Leadership was needed - a campaign with role models, words, advertising materials. And that hasn't really functioned well to date. 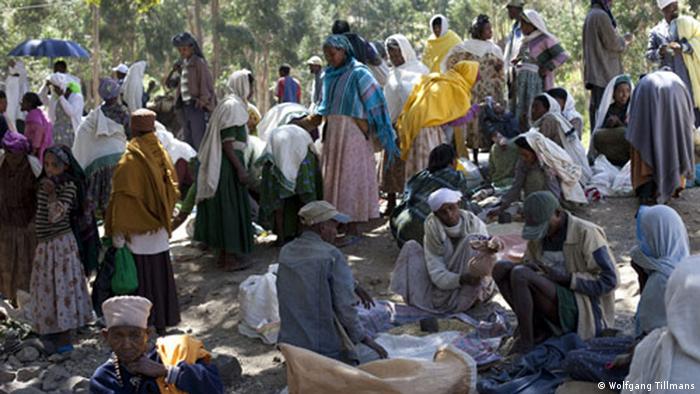 But it is phenomenal that the EU has done little to communicate their successes to the more than 500 million citizens in Europe. The EU is ashamed to make an appearance. It's like they are the parents of a spoiled teenager who is hitting them. We are now at the point that the parents can no longer be hit. They'll snap.

Would you give your Turner Prize back if Brexit were to happen?

(Laughs) No, of course not. The vast majority of people in the arts would be as unhappy about a Brexit as myself. We are friends and will be after Brexit. - People are constantly throwing down the gauntlet - like recently in Orlando [Eds.: where a massacre took place in a gay nightclub in the US]. And when you enter into that sort of fight, you are acting exactly as the aggressor wants you to.

Wolfgang Tillmans, a German photographer and artist, was born in 1968. He lives and works in London and Berlin. He was the first photographer and non-British person to receive the renowned Turner Prize when he won in 2000.

"Made in Germany" is a label that sells. But when it comes to people, how German is Germany today? Croatian-German author Jagoda Marinic tells DW why identity is fluid - and the far-right so dangerous. (14.06.2016)

Who's Afraid of Brexit?

Should Britain leave the EU, or stay in? The UK will answer that question in a referendum on June 23. It's a hot discussion topic right now. What do artists have to say about it? (06.06.2016)