Why Central Asia is increasingly worried about Afghanistan | Asia | An in-depth look at news from across the continent | DW | 04.11.2015

As foreign militants join the Taliban's fight against government forces in Afghanistan, Central Asian countries are more and more worried about the danger of Islamic fighters infiltrating the region. DW examines. 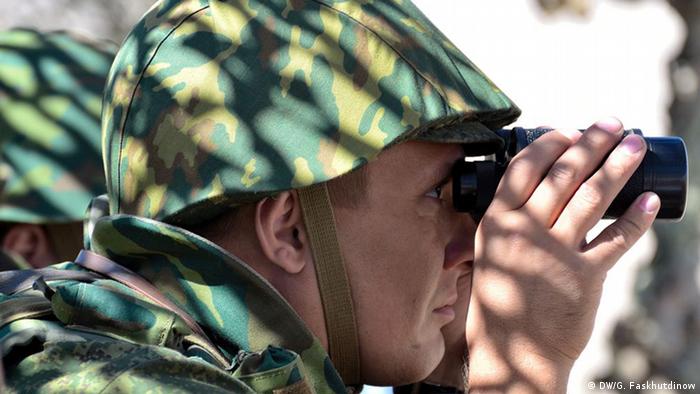 US Secretary of State John Kerry recently concluded a five-nation tour of Central Asia, reassuring the countries' leaders - increasingly concerned about the threat of Islamic extremism - that Washington remains committed to the region's security, even though the US has scaled down its military presence in Afghanistan.

In fact, during a meeting with Tajikistan's President Imomali Rakhmon, Kerry reaffirmed Washington's intentions of helping that country secure its border with Afghanistan, and explained that the US decision to slow the drawdown from the war-torn country also served that purpose.

Afghanistan has been a source of concern in recent years for the former Soviet states which fear the fighting in the war-torn country could spill over into their territory, particularly after reports emerged that a large number of Central Asian militants - Uzbeks, Chechens, Tajiks and Kazakhs - fought alongside the Taliban during the insurgents' brief capture of the northern Afghan city of Kunduz in late September.

"Terrorists of different stripes are gaining more influence and do not hide their plans for further expansion," Russian President Vladimir Putin said last month at a summit of the Commonwealth of Independent States (CIS) in Kazakhstan. 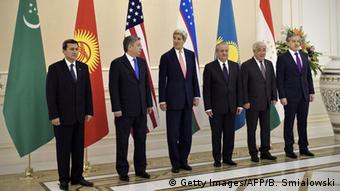 There is also a growing concern about the spread of extremist ideas in the region. For instance, Tajikistan's authoritarian government - which has been in power since 1992 - faced embarrassment earlier this year when the commander of the country's Special Forces declared himself a member of "Islamic State" (IS). There have also been reports of attacks on police staged by militants allegedly sharing IS views.

Any signs of instability in Tajikistan are a source of concern to Washington, but especially to Moscow upon which Dushanbe relies through the Collective Security Treaty Organization (CSTO) for external security. For instance, Moscow has military bases in both Kyrgyzstan and Tajikistan.

But just how serious is the threat emerging from Afghanistan? According to President Putin, the situation is "genuinely close to critical." But analysts say there has been limited evidence of that so far. So in order to fully understand the issue, it's important to take a broader look at ties between Afghanistan and Central Asia.

Afghanistan's immediate neighbors - Turkmenistan, Uzbekistan and Tajikistan - still share a common cultural and social heritage with their Afghan neighbors despite their isolation during the Soviet rule.

Tajikistan, for instance, is both an important trade partner - especially for energy - and a comfortable fall-back "base" for many Afghan politicians and commanders of Tajik ethnicity, said Alexey Yusupov, director of the Afghanistan office of the German foundation Friedrich-Ebert-Stiftung (FES), explains.

But although generally stable, Kabul's relations with its neighbors to its north are not necessarily tension-free. There is a long legacy of cross-border crime and violence, much of it fueled by the drug trade, and such unrest has sometimes ratcheted up tensions. 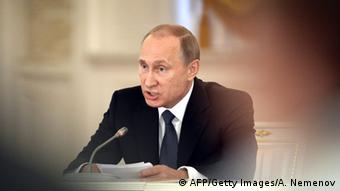 'Terrorists of different stripes are gaining more influence and do not hide their plans for further expansion,' said Putin

Central Asian states are particularly concerned about the trajectory of the Taliban insurgency, because in recent years it has become so much stronger in northern Afghanistan than it had been before.

"I think we can assume that the Taliban's brief takeover of Kunduz was a wake-up call for some of the more naïve officials in Central Asia who may have believed that the violence was restricted to areas further away from Central Asian borders," Michael Kugelman, Afghanistan expert at the Washington-based Woodrow Wilson Center for Scholars, told DW.

"My sense is that Central Asian states worry greatly about increased fighting in northern Afghanistan, not just because of the violence but also because of the refugee flows and drug trafficking that could intensify," Kugelman added.

Although the Taliban have repeatedly stated they have no ambitions beyond reclaiming control over Afghanistan, it is known that foreign Islamist groups operating in Afghanistan such as IS or the Islamic Movement of Uzbekistan (IMU) have a much broader agenda.

Nevertheless, analysts argue that security threats to Central Asia don't come mainly from Afghanistan, but are rather posed by returning homegrown jihadists and groups based in countries such as Pakistan who have infiltrated Afghanistan.

"For Central Asia, the primary concern is descendants from the region who fight in Syria in the al-Nusra Front or IS-affiliated brigades," said Yusupov. Moscow says some 5,000 to 7,000 people from former Soviet states, including Russia, are fighting alongside IS jihadists in the Middle East. 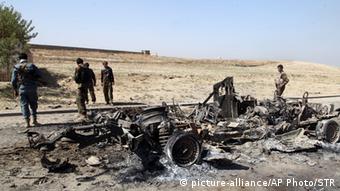 "Their eventual return would mean an influx of experienced and radicalized militants thereby constituting a serious threat to the ruling regimes and societies of Central Asia. This is why preventing this scenario is one of the motivational rationales behind the recent Russian campaign in Syria," the FES expert added.

But that's not all. Tamim Asey, a research fellow at the Kabul-based Afghan Institute for Strategic Studies (AISS), points to a host of Pakistani groups such as Lashkar-e-Jhangvi, Lashkar-e-Taiba, and Sipah-e-Sahaba as contributing to the overall security threat in the region. It is believed that many of these militant outfits crossed into neighboring Afghanistan when the Pakistani army decided to launch a military offensive against them in 2014.

"Right now - their aim is to either return to North Waziristan or find an alternative sanctuary. Once resettled, they want to step up their operations in Pakistan, Afghanistan and Central Asia," said Asey.

IS gaining a following

As for IS in Afghanistan, experts indicate that the group's factual weight and importance is currently significantly lower in comparison to the public perception.

"Their territorial control is so far limited to a couple of districts in Nangarhar Province, with some incidents also reported in Kunar Province," said Yusupov. Afghanistan expert Kugelman agrees: "Despite all the hype and threats, IS remains a big threat in the Middle East, and not beyond that region - at least not yet."

The more pressing issue for Central Asia and Afghanistan is that many radicalized and unaligned militants are galvanized by the IS brand and wish to associate themselves with it, even if they have no formal institutional linkages.

This means, in effect, that many militants in the region are carrying out attacks and giving IS the credit, especially after the confirmed death of Taliban leader Mullah Omar. 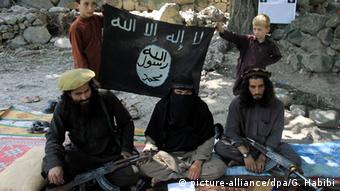 "Though there's no indication of formal allegiances between these disaffected militants and IS, the group is starting to gain, at least rhetorically, a following that is more than negligible," said Kugelman. On top of that is the fact that the Central Asian IMU, described by some as one of the most vicious militant groups in the world, recently announced its loyalty to IS.

"The IMU has been close to al-Qaeda and has fought very closely alongside the Taliban. It's staged countless attacks in Afghanistan and Pakistan, and the fact that it's now tied to IS is nothing but bad news," Kugelman added.

This means that IS militants in Afghanistan could indeed become a significant threat if the country and especially its economy continue to deteriorate. What's surprising in this context, despite their proximity to Afghanistan, the Central Asian states do not have extensive legitimate economic relations with Afghanistan.

The US Secretary of State has reiterated to Central Asian leaders they are not being neglected by Washington. His visit comes as the US withdraws troops from neighboring Afghanistan. (03.11.2015)

Five Central Asian states have issued a joint communique following talks with US Secretary of State John Kerry. They called for an independent and peaceful Afghanistan (01.11.2015)

Russia and former Soviet republics in Central Asia have agreed to create a joint task force to defend external borders. Russian President Vladimir Putin had warned that violence in Afghanistan could spread north. (16.10.2015)

US failure in Iraq looms over Afghanistan

President Barack Obama has again changed course and decided to keep troops in Afghanistan well beyond 2015. Policymakers are concerned Afghanistan will suffer the fate of Iraq if the US leaves. Spencer Kimball reports. (16.10.2015)

This is in part testament to the fractured nature of the larger region but also to the sheer profitability of the illegal drug trade, which links elites in Afghanistan and the Central Asian states, Deirdre Tynan, Central Asia Project Director at the International Crisis Group in Kyrgyzstan, explained.

In the meantime, it seems the militants' main objective remains Afghanistan, especially since most of the fighters involved seem to share the Taliban's ideology of establishing a hard-line Islamist Afghan state and, perhaps more importantly, already enjoy de facto control of large swaths of the country.

By comparison, the situation to the north is very different. "In Central Asian states you have these large crackdowns against militant groups, which curtail their freedom of movement and make it harder for them to operate. In an ideal world, the militants would redirect their attention back to Central Asia and perhaps Russia, but they simply don't see a very easy environment to work in back in those areas at the moment," said Kugelman.

This, however, doesn't exclude a scenario of increased terrorist attacks in the area - probably the reason why Moscow recently decided to beef up its 7,000-strong military presence in Tajikistan with attack and military-transport helicopters.

Although both Russia and Central Asian republics have had their experience with combating domestic Islamism, they have concentrated thus far on instruments of law enforcement and intelligence control. But as FES analyst Yusupov explains, this strategy does not address the social issues and the economic factors underlying the recruitment dynamics.

"Most of the Central Asian combatants in Syria left their countries as migrant workers to Russia trying to support their families through remittances. The economic crisis in Russia took them then to the paying 'jobs' inside the IS, thus intertwining economic and ideological motivations," he said.