Why are Pakistan′s generals taking up top civilian posts? | Asia| An in-depth look at news from across the continent | DW | 28.05.2020

Why are Pakistan's generals taking up top civilian posts? 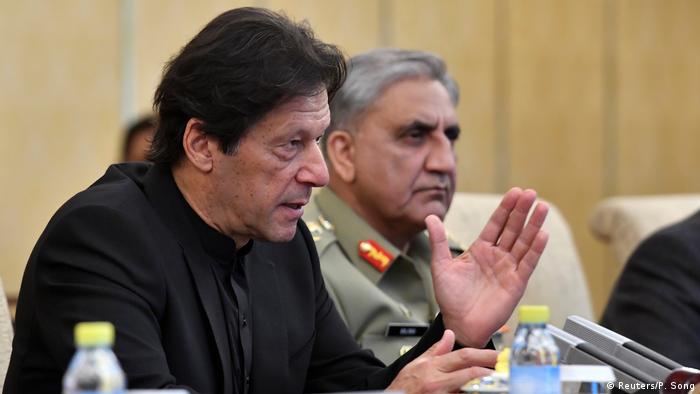 The recent crash of a Pakistan International Airlines (PIA) plane has ignited a debate about whether military officers should hold important civilian jobs.

An aircraft carrying 91 passengers and eight crew crashed into a residential area near the southern Pakistani city of Karachi on May 22. Ninety-seven people were killed and two survived when flight PK8303 from Lahore went down close to the city's international airport.

Initial investigations revealed that both engines of the plane were damaged after they scraped the runway during the pilot's first landing attempt. But some reports suggest the aircraft was in poor condition before it took off from Lahore.

This has led some people to question the management of PIA, Pakistan's state-owned airline.

At the helm of the flagship airliner is Air Marshall Arshad Malik. He was chosen to head the institution in October 2018, a little over two months after Imran Khan became Pakistan's prime minister.

"We demand that Air Marshal Arshad Malik resign after the PIA crash ... The plane was reportedly in poor condition and still it was allowed to carry a hundred passengers taking a huge risk," Noreen Haider, a columnist and rights activist, wrote on Twitter.

PIA, once a thriving airline, has been suffering huge economic losses for many years. Passengers complain about poor service and frequent flight delays.

Malik was brought in to remedy the situation and turn PIA's fortunes around. Many people in Pakistan believe that the military can better manage state institutions as army officials are not corrupt, unlike elected civilian leaders. At the same time, there are others who say that the military is increasingly taking over all important civilian posts and is practically running the government.

"It's the latest indication of the Pakistan military, directly and indirectly, scaling up its role in policy," Michael Kugelman, a South Asia analyst at the Wilson Center, tweeted on April 27.

Since Khan came to power, both serving and retired military officials have been given a number of government portfolios that have traditionally been civilian roles, analysts say. Rights activists accuse the military of rigging the 2018 general election in Khan's favor, a charge both the military and the premier deny.

A recent report by the European Foundation of South Asian Studies, an Amsterdam-based think tank, says that the military dominance in Pakistan has increased manifold in the past two years.

"It is not just that military interference in matters of governance continues to be a reality, rather the military has gone far beyond the traditional realms of national security and foreign policy and strengthened its hold over other aspects of state rule, including finance, commerce, interior, railways, China-Pakistan Economic Corridor (CPEC) and even media management," the think tank wrote in a recent commentary.

Ayesha Siddiqa, a London-based Pakistani researcher, told DW that the present political setup in Pakistan is a "hybrid martial law."

"I think the military wants to directly get involved in governance because it feels that Khan's Pakistan Tehreek-e-Insaf party can’t run the country without its support," Siddiqa said. "The generals prefer a government with a civilian façade – in reality, they want to control everything."

Siddiqa fears that more ministries will be taken over by the military officials in the coming years.

Tauseef Ahmed Khan, a Karachi-based political analyst, said that previous governments tried to resist military's dominance in policymaking, but Khan's government has no issue with it.

Amjad Shoaib, a retired general and defense analyst, dismisses criticism that the military is power-hungry.

"There are some sections in the country that like to malign the military. All appointments in civilian institutions are done purely on merit. It is the civilian government that has appointed military officials to these posts," he told DW.

Shoaib is of the view the military officials can manage civilian institutions and departments effectively and professionally.

"Under Air Marshall Noor Khan, PIA became a profitable institution. General Qayyum did the same with an ailing Pakistan Steel Mills. There are many other government institutions that started performing better when military officials took charge," Shoaib underlined.