Why are Afghan Shiites being targeted?

Afghanistan has seen a surge in terror attacks targeting the country's minority Shiite community. Observers say the attacks are aimed at undercutting the government's credibility and exacerbating the sectarian tensions. 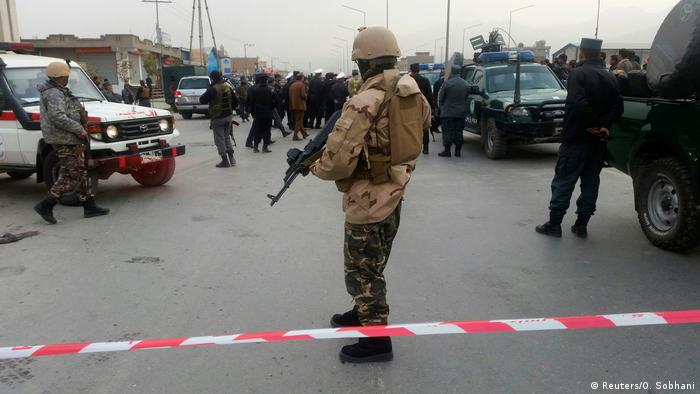 Little did the parents who took their children to Baqir-ul Olum mosque in Kabul on Monday, November 21, know that they would have to carry the dead bodies of their children back home. On this fateful day, a suicide bomber detonated an explosive device here killing at least 30 people and wounding dozens during a Shiite religious ceremony.

"The people killed in the attack are not government officials, they are all ordinary people," said Sharif, who goes with only one name. Sharif was present in the mosque at the time of the incident.

"Why are we being attacked for worshiping or demanding our rights?" he lamented, referring to other similar attacks that seem to have targeted Afghan Shiites, a minority in the mainly Sunni Afghanistan.

The latest attack follows two other such incidents in the month of October alone that killed over 32 people in Kabul and Balkh provinces. In July, another attack in Kabul killed over 100 protesters - mostly Shiite Hazaras.

Almost all the casualties of these attacks, for which so-called "Islamic State" (IS) has claimed responsibility, were Shiite Afghans, rising concerns over an increase in sectarian violence across Afghanistan.

Such violence has been on the rise since the emergence of IS in Afghanistan in early 2015. The group has carried out brutal attacks on other religious minorities in its strongholds in Syria and Iraq.

In Afghanistan, however, where Shiite Muslims make up an estimated 15 percent of the population of about 30 million and mostly come from the Hazara ethnicity, sectarian attacks are a relatively new phenomenon.

Although the Taliban regime targeted Hazaras during their time in power in Afghanistan in late 1990s, the group has distanced itself from recent attacks on Shiite mosques.

Nevertheless, some Taliban members and IS still view Shiite Muslims as apostates, and carry out attacks on their mosques and public gatherings.

An explosion has taken place inside a mosque in the Afghan capital, Kabul, killing and injuring several people. Police vehicles have reportedly been taking the wounded to hospitals. (21.11.2016)

"The IS attack was also an attempt to weaken the current Afghan government by portraying them as unable to protect the country's minorities," he said.

But this is not the only challenge the government in Kabul is facing at the moment. It also suffers from deep internal fissures between President Ashraf Ghani and Chief Executive Abdullah Abdullah over the power-sharing deal of the National Unity Government (NUG).

Also, the Taliban continue to pose the greatest challenge for the Afghan security forces who have been struggling to keep the group at bay since taking over the war-ravaged nation's overall security responsibility from NATO forces.

The presence of IS has so far been confined to a few districts in eastern Nangarhar Province of Afghanistan. And its members are mostly former Taliban and other extremist elements. IS, however, has ideological differences with the Taliban, which remains the strongest anti-government armed force in the country.

Clashes with government forces and Taliban members have weakened Islamic State in Afghanistan. But analyst Wolf believes the terrorist group intends to send a message to the government as well as the Taliban that it still has a presence across Afghanistan and can pose a threat.

The attacks were also a warning to minorities in Afghanistan not to support a peace process with the Taliban or any other group, according to the expert. "The IS attacks must be seen as a clear warning against the Shiite community not to cooperate with the Taliban or the NUG and that they should keep a low profile," he added.

Some observers see the recent attacks in a bigger context of rivalry between Shiite and Sunni extremists. Groups funded by extremist elements of both these branches of Islam, encourage such incidents, they argue.

Such attacks have been carried out by extremist Sunni groups in countries like Pakistan and, experts believe, Afghanistan is on the verge of becoming involved in the bigger scenario of sectarian violence.

Civil society activist Dawood Naji says the ambiguous foreign policy of the Afghan government has paved the way for the emergence of this type of violence.

Sunni-majority Saudi Arabia and Shiite Iran are regional rivals. Their quest for dominance in the region, and the ensuing power struggles, has aggravated conflicts in countries such as Syria and Yemen.

But it is very difficult to prove and even close to impossible to determine if the recent wave of attacks against Afghan Shiites is actually sponsored by extremist groups outside Afghanistan.