Why are Afghan officials not announcing election results? | Asia | An in-depth look at news from across the continent | DW | 29.11.2018

Why are Afghan officials not announcing election results?

It's been more than a month since Afghanistan held its parliamentary vote, but election officials are yet to announce complete results. What's causing the delay? And will it undermine the vote's credibility? DW analyzes. 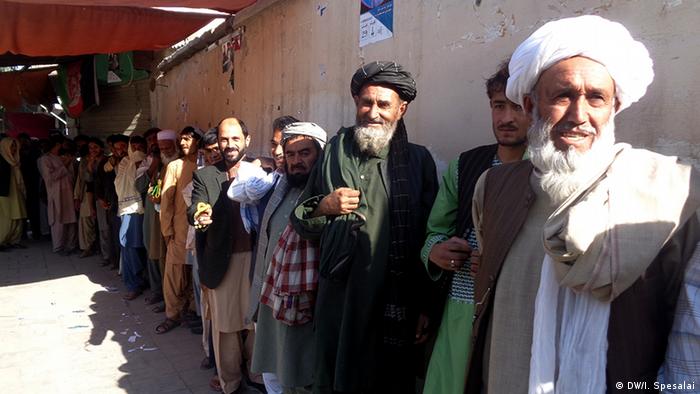 On October 20, more than four million Afghans ignored Taliban and "Islamic State" (IS) threats and cast their ballots in the parliamentary elections.

But Afghanistan's Independent Election Commission (IEC) is yet to announce election results — more than a month after the polls. Out of 33 Afghan provinces, the IEC has announced results for only 13 that have the least number of seats in parliament. Election authorities are yet to announce results for bigger provinces, including Kabul.

"We are currently working to finalize the process of recounting and assessing the votes cast in other provinces," said IEC spokesman Abdul Aziz Ibarhimi recently, still not giving a final date for complete results.

"We have doubled the number of personnel to ensure that the Kabul results would be declared in the coming weeks," Ibrahimi added.

Counting votes in some Afghan provinces is indeed a difficult task. For instance, some 800 candidates participated in the Kabul elections, and IEC officials have to scan the votes for each candidate manually. Authorities say more time is needed to identify fraudulent votes.

But some observers say the IEC is afraid of a backlash from the potential losing candidates. The IEC believes that if it declares election results for all provinces at a time, it could be problematic. The candidates already complained of fraud and irregularities on the election day.

"I think the IEC is assessing the situation to avoid a situation in which the validity of the vote could be challenged all across Afghanistan," Habibullah Shinwari of the Election and Transparency Watch Organization of Afghanistan told DW.

Shinwari backs his claim by pointing out that in some cases the IEC announced election results from some provinces very late at night in order to lessen an expected backlash.

But this strategy could mar the credibility of the entire election process, he added.

"Losing candidates should also be given a chance to file complaints. That is why the results should be announced soon," Shinwari stressed.

Nasratullah Wafa, who contested the election in the eastern Logar province, said he doesn't know when the IEC will announce results. "It could happen tomorrow or in three weeks. In any case, we will not have enough time to file our complaints," he told DW.

Lessons for the future

Electoral reforms were on top of President Ashraf Ghani's reform agenda when he took office in 2014. Despite taking some good measures, including preparing voters' lists and using biometric identification in the October 20 parliamentary elections, his government and the election commission have so far not been able to organize transparent elections.

On the contrary, many of the measures aimed at ensuring transparency have backfired. Many Afghans could not cast votes in the latest elections due to errors in voters' lists. On the other hand, the government has spent millions of dollars on biometric technology but has not been able to train the IEC staff to use the equipment.

Afghanistan will hold presidential elections in April next year, but observers say the outcome of the vote would not be any better if Afghan authorities do not learn from their mistakes.

"The IEC needs to be reformed, otherwise we will have a worse situation next year," Shinwari said.

But Afghanistan's election officials say they are aware of the challenges and are working hard to avoid mistakes in the presidential elections.

Security has been stepped up as polling begins in Afghanistan's parliamentary election. Germany's special envoy for Afghanistan and Pakistan tells DW he's still optimistic about the country's future. (20.10.2018)