Security has been stepped up as polling begins in Afghanistan's parliamentary election. Germany's special envoy for Afghanistan and Pakistan tells DW he's still optimistic about the country's future. 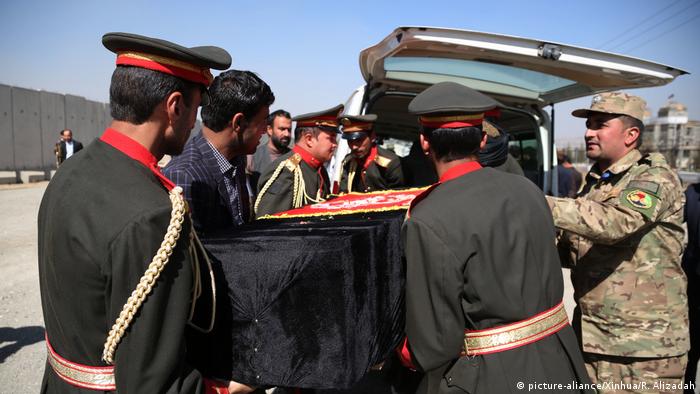 Afghan authorities opened polling stations Saturday despite a violent attack in Kandahar two days earlier that killed General Abdul Raziq, one of the country's most powerful security officials and a key US ally in the war against the Taliban.

The vote is the first parliamentary election in Afghanistan since the end of NATO's combat mission in 2014.

However, the election in Kandahar and Ghazni provinces has been postponed by one week.

The interior ministry sent an extra 20,000 military personnel to boost the 50,000-strong deployment already guarding polling stations around the country.

Early on Saturday, two small bombs were reported at polling stations on the outskirts of the capital, Kabul. Two other small attacks in Farah and Kunar provinces, in the north of the country, injured two women.

Thursday's much larger attack came at the end of a high-level security meeting of US forces and NATO Resolute Support Mission commander General Scott Miller, provincial Governor Zalmay Wesa and provincial spy chief, Abdul Mohmin. Mohmin and an Afghan journalist are also believed to have died.

Miller survived the attack. Two Americans and the governor were among 13 people injured.

The Taliban immediately claimed responsibility for the attack and announced via social media that Miller and Raziq were the targets of the shooting.

"The brutal police chief of Kandahar has been killed along with several other officials," the statement read.

Some 2,500 candidates are competing for 249 seats in the lower house of parliament. So far, 10 of them have been killed during the election campaign.

Despite these threats, Markus Potzel, Germany's special envoy to Afghanistan and Pakistan and a former German ambassador to Afghanistan, said the elections can be held in a "legitimate way."

"Although voting can't take place at one-third of the country's polling stations, the positive thing is that two-thirds of polling stations will be open for voting," Potzel told DW in an interview ahead of the vote.

"People are tired of the war, the warlords and the power brokers. They want peace. We are helping them," Potzel added.

But Kheyal Mohammad Hamdard, a Kandahar resident, said that most people in Kandahar might think twice about voting.

"People here are very scared. People looked up to General Raziq as their protector, but now he became a victim of an attack himself," Hamdard told DW.

Raziq was also a fierce critic of Pakistan and accused its military of backing the Taliban and other Islamist groups in the region.

Dissatisfaction with the political process

Experts say that most Afghans have little faith in the political process, as the country's politicians have not delivered much to the people in the past decades.

Some hoped the situation would improve after the US-led military coalition ousted the Islamist Taliban regime in 2001. But traditional politicians, who had been in power prior to Taliban rule, regrouped and recaptured power once the democratic setup was restored in the war-torn country.

There is a silver lining: Many young and educated candidates are also running this time around. These include entrepreneurs, journalists, teachers and former government employees.

"There are reasons to be optimistic. Young Afghans want to be members of parliament; they want to bring a change to their country," Potzel argued.

The German envoy insisted that the West's campaign in Afghanistan has not been a complete failure.

"Afghanistan is not a breeding ground for terrorists [anymore]. There are still attacks and the security situation is far from perfect, but there have been many achievements in terms of health, education and life expectancy."

Potzel said Germany enjoys the trust of the Afghan people and their government, and that "to some extent the Taliban want us as a facilitator" in the Afghan conflict.

'Germany engaged in pre-talks with the Taliban'

It is unclear how Thursday's attack could affect the US-led moves towards peace with the Taliban. Last week, Zalmay Khalilzad, the US special envoy for Afghanistan, held talks with the Taliban in Qatar, which infuriated the Afghan government. Kabul has maintained that it should lead the Afghan peace process.

"The US government agrees that the actual peace talks should be held between the Afghan government and the Taliban because it is an internal Afghan conflict," Potzel added.

But Khalid Pashtun, a member of parliament from Kandahar, said the Taliban's attempt to kill US General Scott Miller on Thursday will dent peace efforts.

"The recent attacks are a big blow to the Afghan security forces, and a win for Taliban," Pashtun told DW.

A candidacy for survival in Afghanistan